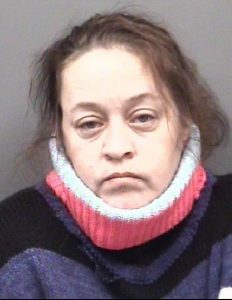 SALISBURY — A Salisbury woman who had been drinking said she accidentally ran over her fiancé while trying to leave after an argument, according to a Salisbury Police Department report.

Police charged Tonya Lee Walker, 44, of the 800 block of Park Avenue, with driving while impaired and assault with a deadly weapon.

Walker struck Dewthay Walker Jr. with a 1995 Ford Explorer, according to the arrest warrant. Her blood alcohol content was 0.16, which is double the legal 0.08 limit.

She told police she got off work and picked up Dewthay Walker from the Fish Bowl arcade, where people play games of skill. When they left the Freeland Drive arcade, he had been drinking, Tonya Walker told police. The two later went to the Fish Bowl bar in downtown Salisbury.

Tonya Walker said she drank two Long Island iced teas at the bar. She said she danced with a woman and then was approached by a man. She and Dewthay Walker argued when they got home.

Dewthay Walker was taken to the hospital with a broken leg, police said.