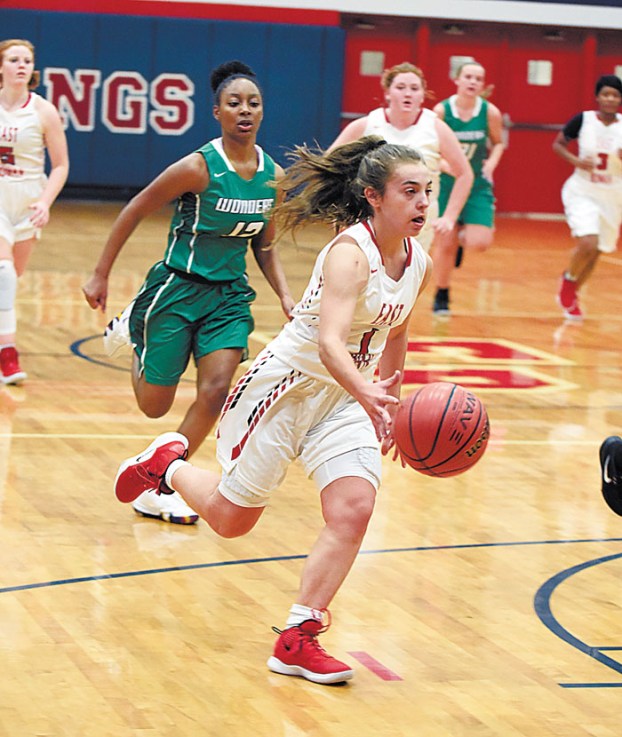 Playoffs: Lost first round to Asheboro

GRANITE QUARRY —  First of all, the East Rowan girls have gotten tall.

“We’ve gone from no size at all to being one of the bigger teams around,” East coach Kevin Holland said.

Among other things, East’s size transformation will allow 5-7 Caroline Houpe to move from the post to the wing, which is a much better fit for her skill set. Houpe, who scored in double figures five times last season, has gotten in foul trouble frequently when battling larger people for rebounds, but rebounding should no longer be an issue for the Mustangs.

East was struggling to climb a steep hill in Holland’s first two seasons, overmatched in terms of numbers, size and talent, but last season’s addition of Spry, who posted nine points and nine rebounds on an average night, helped elevate the program. Point guard Adalie Harrison has been one of the county’s better players for a while. Grace Eagle has developed into a consistent scorer. Houpe can do a lot of things.

East was still stuck in the North Piedmont Conference with four very stout teams (Carson, North Iredell, Statesville and West Rowan all won 19 or more), but the Mustangs jumped to 14-13 in 2018-19. East stood 11-2 after the Christmas tournament, but it’s hard to win in the NPC. The Mustangs got their first conference victory in a while against South Iredell and they even beat West Rowan in the NPC tournament.

East followed that success with a sensational summer, winning a championship in Catawba’s camp. Now the Mustangs have a chance to take another step forward and challenge the conference leaders. Carson lost McKenzie Gadson. West lost Mary Sobataka. Statesville and North Iredell lost an awful lot.

“There’s really a wide range of possibilities for us,” Holland said. “We could be about the same as we were last year — or we could be pretty good. We could even be really good, but to get there we’ve got to work. We’re not there yet.”

It will start with Harrison, a senior who has scored 686 career points. She’s started since she was a freshman. She averaged 11 points per game last year while doing most of the ball-handling.

“We want her in double figures every night, but she doesn’t have to score huge numbers for us to be successful,” Holland said. “A solid game for her is going to be 12 points, six assists, five rebounds and four steals.”

Harrison’s assist totals figure to go up quite a bit because East has a lot more people who can catch her passes and finish.

Dalton’s impact is going to be felt most initially on the defensive end, as an intimidating shot-blocker and shot-changer. Nwafor, who is 5-10, and Hinceman will help raise East’s level of athleticism. They’re both agile. Hinceman is skilled enough to play on the wing.

Eagle (10.1 ppg.) is a dependable scorer from the wing and had a 25-point game last season. Harrison and Spry scored 20 each in that NPC win against South Iredell.

“The last few years, we’ve had three or four potential double-figure scorers, but now it’s more like seven or eight,” Holland said. “We’ve been averaging in the 40s, but we should be able to get  that into the 50s this year. Maybe 60.”

East averaged 43.9 points a year ago, while allowing 46.1. If the Mustangs can maintain that level of defense while seriously boosting the offense, it’s not hard to figure out what can happen. The potential is there for a really nice season.

East can play at a faster tempo. Any foul trouble at all has been devastating in recent years, but it should be much less of a factor this time if a starter has to sit for a while. East has more athletes, more size, more everything.

“We’re hoping to fly under the radar for a while longer,” Holland said. “If everyone’s looking for West and Carson, maybe they won’t be looking for us. Maybe that will help us.”

Sophomore guard Madie Honeycutt acquitted herself well as a varsity freshman and will be helpful again. Holland also expects to get contributions from Lydia Miller, Nora Ali, Azaria Jones and Kendall McPherson.

Holland said there have been nagging injuries that kept the preseason from being as strong as he would have liked, but Spry, who missed last year’s playoff game with a knee injury, had a terrific performance in the scrimmage at Albemarle.

“She’s more aggressive and more confident,” Holland said. “If she plays like that, she’ll have a great season.”

East’s most recent great season was in 2014-15 when the Mustangs went 22-4, won the Christmas tournament and reached the third round of the state playoffs.

East probably isn’t ready to take that sort of leap, but the Mustangs, assuming they stay healthy, are just about certain to improve on 14-13.

“I can’t predict how many we’ll win,” Holland said. “This is a very tough area for girls basketball and we’ve made our non-conference schedule tougher because strength of schedule is such a factor with the MaxPreps rankings.”

While East will be a 3A school for one more season after this one, it appears destined for 2A when the next realignment comes for the 2021-22 school year.

“The good thing is that we’ve got talented young players,” Holland said. “We should be in good shape, not just for this season, but for several more to come.”