Citizenship and friendship: This Thanksgiving has new meaning for… 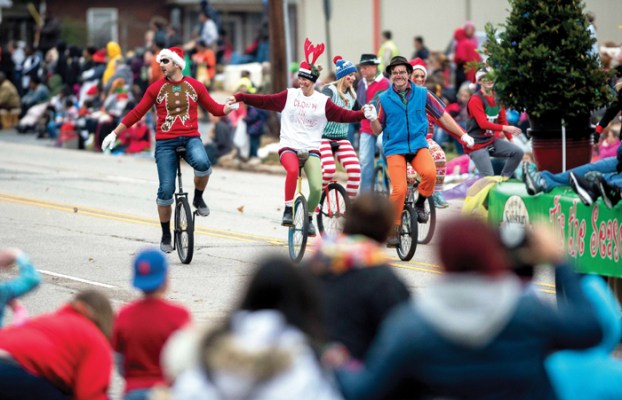 Members of the Arey family makes an appearance in the parade with their unicycles. Jon C. Lakey/Salisbury Post

‘Tis the Season Spectacular lives up to its name

SALISBURY — For 12 years now, even before Cheryl and Ted Goins restored a downtown building to house Pottery 101 downstairs and their home upstairs, they have watched the city’s holiday parades from the second floor.

And they’ve thrown a traditional party to go with it.

The first time, they propped open the second-floor windows with sticks so they could yell, cheer and hear the sounds of the parade entries going by.

In recent years, Cheryl Goins, owner of Pottery 101, and Wendy Alexander-Persse, owner of South Main Book Co., have tossed around the idea of participating in the parade with a joint float, especially since it has become the ‘Tis the Season Spectacular.

But the friends always realized that would mean not attending the traditional upstairs party.

“Even if we weren’t speaking to each other,” Alexander-Persse said Wednesday, “… I would still come to this party.”

So this year, Goins thought of the next best thing. It hit her that maybe her building on the Square was a float in its own right. 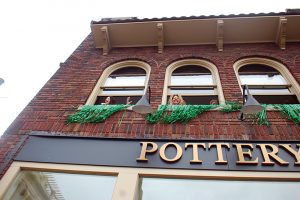 Mark Wineka/Salisbury Post Pottery 101 owner Cheryl Goins, center, watches the ‘Tis the Season Spectacular parade from her upstairs apartment Friday afternoon. She tried to make her building resemble a float by hanging the green ‘parade float fringe’ from her windows.

She hung green, 29-inch-long parade float fringe from her many second-floor windows, and there it was — their parade float.

Folks at the Pottery 101 viewing party enjoyed a ‘Tis the Season Spectacular on Wednesday that lived up to its name.

With Shari Graham and Hen Henderlite as the main organizers, the holiday parade through Spencer and Salisbury held all the moving parts necessary to usher in the Christmas season.

Name about every mode of transportation — from horses and unicycles to tractor-trailers, trolleys and firetrucks — and you saw it go by.

Any kind of costume or outfit also carried the day — from dance company leotards, Scout attire, pajamas and band uniforms to the stuff that elves and mascots wear.

There were star performers such as Tim Elliott, twice voted by fans as Carolina’s Male Country Artist of the Year.

There were heroes such as military veterans, law enforcement officers and firefighters.

There were incredibly happy rescue dogs, thanks to the volunteers with Shelter Guardians.

Overall, the ‘Tis the Season Spectacular parade had close to 120 entries, from churches and schools to businesses and institutions, from nonprofits and local government boards, to theater groups and libraries.

And wildly popular was a float carrying members of Rowan County’s World Champion Little League softball team. Many of the players walked next to the crowd handing out bubblegum.

Rain came down hard enough Wednesday morning that many people were asking, “Is the parade still on?”

But the rain passed through by late morning, and this second edition of ‘Tis the Season Spectacular was a dry one.

Winds kicked up, and the temperatures were colder than forecast, but by parade’s end, the day was much milder and even patches of blue sky were showing through.

“Second year in a row coming,” Wood said, “and I came as a kid. I just liked coming and seeing everyone I knew.”

While the parade seemed similar to ones she remembered as a child, “I don’t remember there being funnel cakes,” Wood said, nodding toward a funnel cake tent down the street.

Kate Faries brought her infant son, Damian, to his first parade. He watched from a stroller, and someone remarked that he won’t recall anything in years to come about this particular edition.

“He’ll remember that I brought him out in the cold,” Faries said, disagreeing.

Sal Illiano brought her children, Baigio and Armona. It was a good break from all the Thanksgiving preparations underway at home, where she had been making pumpkin pie, cranberry sauce and salad, and watergate salad.

When she returned home after the parade, she planned to start marinating her turkey.

“We come here every year,” Sal said. “Sometimes I go to Spencer (where the parade starts earlier), because they are more fresh.”

Sal loves the idea that the parade is becoming something her children will look back on with fondness when they are older.

“This will be tradition, their tradition,” Sal said.

Like turning your building into a float, from which to watch a spectacular parade go by.