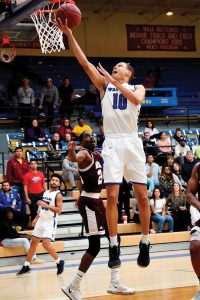 Claudia Lusk/Wayland Baptist University via AP
… In this photo provided by Wayland Baptist University, guard J.J. Culver (10) shoots during a college basketball game against Southwestern Adventist, Tuesday, in Plainview, Texas. Culver became the fourth college basketball player to score 100 or more points in a game, reaching the century mark in a 124-60 win.

Culver hit 34 of 62 shots, 12 of 33 from 3-point range and was 20 for 27 on free throws to finish with an even 100 points for the NAIA Pioneers. He also had nine rebounds, five steals, two blocked shots and an assist.

Culver is the older brother of former Texas Tech guard Jarrett Culver, who led the Red Raiders to the NCAA championship game for the first time last season. Virginia won the title in overtime.

The Culver brothers grew up in Lubbock, home to Texas Tech and about 50 miles south of the Wayland Baptist campus in Plainvew. Jarrett Culver declared for the NBA after two seasons at Texas Tech and is a rookie with the Minnesota Timberwolves.

J.J. Culver is the first college player to score at least 100 since Jack Taylor of Grinnell College, who scored an NCAA-record 138 points in a game in 2012 and followed that up with a 109-point effort in 2013.

“We always script our first couple of plays, and J.J. scored on the first three or four,” Wayland Baptist coach Ty Harrelson said. “The guys realized he was hot and kept going to him. We figured as long as he’s taking good shots and shots out of philosophy that he had a chance to do something special tonight.”

Culver’s total is the second-highest in NAIA history. The NAIA record is 113 points by Clarence “Bevo” Francis for Rio Grande (Ohio) in 1954.

The only other college player to reach 100 in an official game was Frank Selvy of Furman in 1954, according to SportRadar.

Culver was a first-team NAIA All-American and the South Atlantic Conference player of the year as a junior after averaging 17.5 points per game. He is averaging 36.1 points per game this season.

Culver’s big night pushed his career total to 1,534 points, ninth all-time at Wayland Baptist. Kendall Webb has the school record at 2,074 points. Culver could reach the school mark by averaging about 25 points per game the rest of the season.

RALEIGH (AP) — Attorneys for former North Carolina State coach Mark Gottfried are questioning the fairness of the NCAA process after he was charged with failing to adequately monitor the Wolfpack men’s basketball program for violations, including during the recruitment of former basketball star Dennis Smith Jr.

In a response to NCAA charges filed over the summer, the attorneys say Gottfried — now coach at Cal State Northridge — fulfilled his obligations to monitor the program and was following NCAA rules. They also say the NCAA is improperly using court testimony last year by a government witness that he delivered $40,000 to former Wolfpack assistant coach Orlando Early intended for Smith’s family in 2015.

Specifically, attorneys Scott Tompsett and Elliot Abrams say NCAA bylaws prohibit its use in the infractions process because the court case it originated from is under appeal.

“The NCAA broke their own rule when they considered evidence from a court case on appeal and then relied on that evidence to charge Mr. Gottfried with a Level I violation,” they said in a statement to The Associated Press. “They should withdraw the allegation and let the court case run its course.”

The AP obtained a copy of Gottfried’s response from N.C. State through a public-records request Wednesday. The NCAA filed four charges in July in the wake of college basketball’s corruption scandal, with Gottfried charged individually under the provision of head-coach responsibility for violations within his program.

The NCAA has alleged that T.J. Gassnola was acting as an outside consultant of Adidas — which has an apparel deal with the school — to “ensure Smith’s commitment” to the Wolfpack with the payment.

Yet the school, which released its response Monday, states the NCAA has not proven money was actually provided to Smith while questioning Gassnola’s credibility. It also noted Smith — who entered the NBA draft in 2017 after one year at North Carolina State — denied receiving money in an interview with the school earlier this year.

In their response, Gottfried’s attorneys say the NCAA enforcement staff hasn’t told Gottfried how he failed to adequately monitor Early’s recruitment of Smith or what he was required to have done differently, saying that the lack of clarity “may be not a lack of desire but a lack of ability” to explain it.

Additionally, the response accuses the NCAA of “prejudgment” after public comments by NCAA officials earlier this year that charges were forthcoming even with investigations ongoing.

The rest of case focuses largely on improper complimentary admissions on the men’s basketball guest pass list. Gottfried’s attorneys argue he directed his staff to communicate with the school’s compliance office regularly, and relied on compliance staffers to monitor admissions logs.

The NCAA enforcement staff has 60 days to file its own response, which typically leads to a hearing with a panel of the infractions committee followed by a ruling weeks to months later. The staff of current coach Kevin Keatts, who replaced Gottfried in March 2017, has not been accused of wrongdoing.