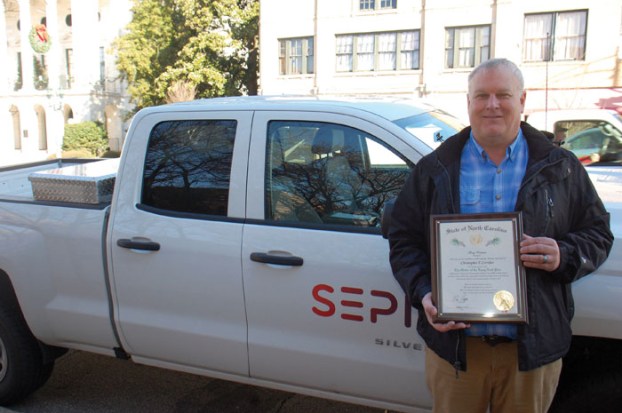 Mark Wineka/Salisbury Post Chris Corribher holds the Order of the Long Leaf Pine conferred on him this summer at his retirement dinner from the N.C. Department of Transportation. With his 31-year DOT career behind him, Corriher now works for SEPI, an engineering and construction firm of more than 350 employees.

SALISBURY — Chris Corriher will be the first to tell you he’s a homebody.

At South Rowan High School, Corriher ranked among the top five in his class, was a Morehead Scholar nominee and received appointments to both the Naval Academy and Air Force Academy.

But he turned down both of those prestigious opportunities and decided to attend N.C. State University instead.

But even as a teenager in 1983, Corriher knew the service academies and being away from China Grove for long periods probably weren’t for him.

“I guess I’m a homebody and thought of only coming home a couple times a year … I just didn’t know if I would be successful,” he says.

Corriher’s life followed a completely different and highly rewarding arc as he built a 31-year career with the N.C. Department of Transportation — and he did it at home in Rowan County.

For his decades here as assistant district engineer, Rowan County maintenance engineer and from 1996 to 2019 as district engineer for Rowan and Davidson counties, Corriher received The Order of the Long Leaf Pine.

When he holds the Gov. Roy Cooper-bestowed honor — the highest civilian award in the state — Corriher says there may be one name on the plaque, but it represents the fellow DOT employees, contractors, municipal and county representatives — “really all the people who made things possible.”

All of those friends gathered this summer for his retirement dinner at the First Reformed Church’s fellowship hall in Landis. Corriher went along with the dinner, because he looked forward to all those people getting together, telling stories and roasting each other a bit.

He had no idea he would receive The Order of the Long Leaf Pine. The presentation came from a friend since college, DOT Chief Engineer Tim Little, who attended from Raleigh.

“It was humbling, what was said in between the jokes,” Corriher says. “It was really, really humbling.”

In addition, Sen. Carl Ford, R-Rowan, arranged for the N.C. Senate to approve a resolution thanking Corriher for his DOT service. And a presentation of that resolution also was made.

“I’m proud of that, too,” Corriher says.

Corriher, 54, retired on a Wednesday. The retirement dinner was held on a Friday. And by the following Monday, he was working a new job with SEPI, a 350-employee engineering and construction company which has offices in Raleigh, Charlotte, Wilmington, Belhaven and Charleston, S.C.

Working a lot out of his home and company pickup, Corriher serves as a project manager, dealing with “a lot of the things I’ve done in the past, looking after small construction projects,” he says.

He finds himself working again with municipalities throughout the region, building new relationships and helping to solve their road issues.

Chris Corriher is the son of Connie and Charles M. “Crowbar” Corriher of China Grove. His dad, now 85, owned Corriher Gravel and Grading in Concord, and his mom worked at home and out of the office in Concord, helping with the company’s books.

Chris started accompanying his dad to the Concord business at a young age. And according to those annual recaps you get from the Social Security Administration, Chris has noticed he started being paid in 1977 when he was 12.

“I’ve been around that construction stuff my whole life,” he says.

Corriher attended China Grove Elementary, China Grove Junior High and South Rowan High schools. He was a fine defensive lineman for South Rowan’s football team, and in 2012 Post sportswriter Mike London tabbed him as one of his “Friday Night Legends,” reminiscing with Corriher on his playing days.

Corriher started at defensive left tackle for the Raiders from 1980-82, and as a junior in 1981, he beefed up to 200 pounds to be part of one of South Rowan’s greatest defenses, London said.

The Raiders allowed only 45 points in the 10-game regular season.

“Corriher, all-county in that championship season, had his own claim to fame,” London wrote. “He may be the only defensive lineman in history to intercept a pass three straight weeks.”

At N.C. State, where he focused on studies not sports, Corriher took his budding interest in computers and entered school as a computer science major. But he realized at the end of his freshman year he was too much of an outdoors person to think of being tied to computer screens the rest of his life.

He changed his major to civil engineering, a tough discipline, but he was able to graduate by 1988. He immediately hired on with the DOT and entered its 18-month training program.

Corriher spent nine months with construction and maintenance, then delved into other areas such as geotech, roadway design and hydraulics. “You learn a lot and get to meet a lot of different people in 18 months,” Corriher says.

When his training period was over, Corriher was leaning toward the construction side of the department. Except again, he wanted to get out of Raleigh and be closer to home. That’s when he heard about an opening in the Salisbury maintenance office as an assistant district engineer under Don Honeycutt.

Had he ever thought about going into business with his dad after college?

“We talked about it,” Corriher says, “but at the time his advice was go somewhere and work for another person. He said you had to take a lot home with you, and (this way) if the economy was bad you were still going to have a job.”

Honeycutt tasked Corriher with taking on jobs such as installing sections of curbing and guttering or improving intersections. Corriher oversaw the surveying, design, securing of bids and administering the contracts to see the projects completed.

“It was really, really satisfying,” Corriher says. “We flipped those in a few months and would be done.”

Honeycutt retired in 1996, and the district maintenance engineer’s job went to Corriher, who says he and his office always had great cooperation with the two counties and municipalities in them.

With the various towns, for example, Corriher enjoyed identifying  projects and the state funding that would help them. “I’ve worked with some really, really smart people in the counties and cities,” he says.

Even though he often was the point man for receiving complaints, Corriher liked hearing from and meeting with the public, often talking with them in the field to see their concern in person.

“Sometimes they just want to be heard,” Corriher says. “… Problem-solving is something I enjoy. There was a whole lot more good than bad.”

It was Corriher to whom news outlets such as the Post often went to first for updates on the DOT’s preparations for bad weather. He talked a lot, for example, about brine for the roads and sand for the bridges.

Corriher’s interests go beyond roads. As a sidelight, he and his brother, Chad, went into business together on mini-warehouses, which Chad oversees.

Chris Corriher is married to Deanna Garmon, a nurse practitioner whose two degrees are from the University of North Carolina at Chapel Hill.

He has two children from his first marriage — daughter Lynsey, 23, who is attending graduate school at Averett University, and son Cameron, 20, a junior majoring in agri-business at N.C. State.

His stepdaughter, Hannah, is a sophomore at UNC and stepson Preston is a junior at Carson High.

In May, Corriher became one of the founders and board chairman of the Rowan County Youth Anglers, a club for about 30 high schoolers. It has regular meetings and members also are able to compete in bass tournaments.

The students also are involved in community projects, such as participating in the High Rock Lake clean-up efforts in the fall. “That way, you’re teaching them something,” Corriher says. “… We’re more than just a fishing club.”

Corriher himself has been fishing since he was a teen. He has a bass boat today, enters tournaments here and there and otherwise enjoys fishing mostly on High Rock Lake and Lake Norman.

So retiree Corriher is hardly retired, but he still likes staying close to home.