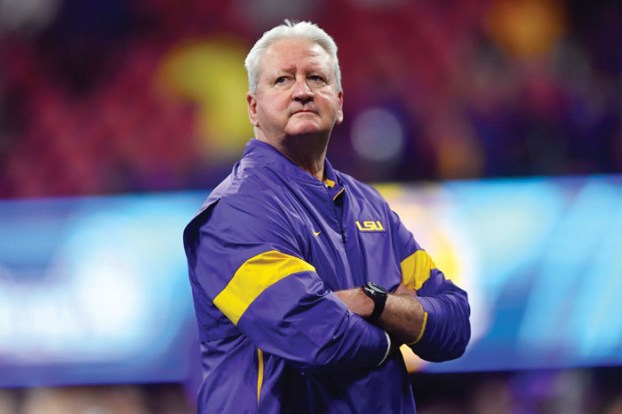 LSU Offensive Coordinator Steve Ensminger watches teams warm up before the first half of the Peach Bowl NCAA semifinal college football playoff game between LSU and Oklahoma, Saturday, Dec. 28, 2019, in Atlanta. Ensminger's daughter-in-law, Carley McCord, died in a plane crash Saturday in Louisiana on the way to the game. (AP Photo/John Amis)

Investigators: Plane in Louisiana crash was intact on impact 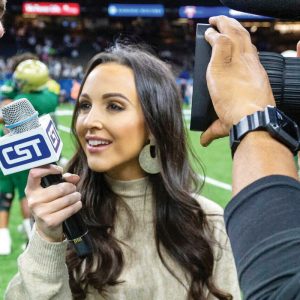 In this Dec. 14, 2019 photo Acadiana head coach Matt McCullough, left, speaks with Carley McCord, center, following a win over the Destrehan in the State Division 5A Championship football game in Lafayette, La. One of victims in a deadly Louisiana plane crash was a sports reporter and daughter-in-law of a Louisiana State University football coach. Steven Ensminger Jr. says his wife, Carley McCord, died in the crash in Louisiana on Saturday, Dec. 28, on the way to a college football playoff game in Atlanta. (Scott Clause/The Daily Advertiser via AP)

A small plane that killed five passengers when it crashed over the weekend in south Louisiana was intact when it hit the ground, federal investigators said Monday, asking anyone in the neighborhood with audio recordings of the plane to come forward.

At a news conference Monday, National Transportation Safety Board Vice Chairman Bruce Landsberg stressed that the investigation into the Saturday crash in Lafayette was still in its early days. But he offered some details of what investigators have learned so far and what they will be looking at in the weeks and months ahead.

Landsberg said investigators have identified what he described as the “four corners of the aircraft,” which means that the aircraft was intact when it hit the ground.

“It did not come apart in midair,” he said.

The aircraft was flying on course until it hit about 900 feet (275 meters), Landsberg said and then it started to turn into a “gradually tightening left turn” and began losing altitude. The weather was overcast on Saturday, Landsberg said, but was considered “flyable under most circumstances.”

Federal investigators have been combing through videos submitted by people who saw the crash and the aftermath and have been talking to witnesses who saw or heard the plane come down Saturday morning.

The six people aboard the 8-passenger aircraft were flying from Lafayette to Atlanta on Saturday to watch the Peach Bowl football rivalry between Louisiana State University and the Oklahoma Sooners. The aircraft crashed about a minute after takeoff, investigators said Monday.

At least one witness told investigators that the aircraft’s landing gear was up before the crash, Landsberg said. NTSB official, Jennifer Rodi asked anyone within a mile (half kilometer) radius of where the plane crashed who has a camera that might have captured audio of the plane flying before the crash to turn it in to authorities.

Authorities expect to have a preliminary report within one to two weeks but Landsberg repeatedly stressed that this was only the beginning of a long investigation. They’ll be looking at everything from the engine to fuel to the weight balance in the plane to the pilot’s experience, he said. A final report on what caused the crash isn’t expected for another year.

“We are interested in everything at this point,” Landsberg said. “We are not ruling anything in or anything out. It’s too early.”

Michael Walker Vincent, 15, was killed along with his mother, Gretchen Vincent. He would have turned 16 the next day.

To honor him, relatives and neighbors gathered at the home of a family friend in Lafayette, Louisiana, on Sunday to sing “Happy Birthday” and to share memories of Michael and his mother, Gretchen Vincent, The Acadiana Advocate reported.

The other people killed on the flight were Ian E. Biggs, 51, the plane’s pilot; Robert Vaughn Crisp II, 59; and Carley McCord, 30, a well-known sports reporter who is the daughter-in-law of the LSU offensive coordinator, Steve Ensminger.

The sole passenger to survive was identified as Stephen Wade Berzas, 37.

Berzas was still hospitalized Monday in critical condition, said Elisabeth Arnold, a spokeswoman for Our Lady of Lourdes hospital.

Berzas had burns on 75% of his body when he arrived Saturday at the hospital, Dr. Joey Barrios, medical director of the hospital’s burn unit, said in a statement Monday. He said Berzas underwent surgery Monday morning to assess the extent of his wounds and apply temporary dressings to them.

The hospital said Berzas is married with six children, a fan of LSU and involved in his church and community. In a statement released by the hospital, the Berzas family said it was moved by the “outpouring of compassion and encouraging words for Wade.”

“We are truly grateful to be held so strongly in prayer by this community,” the statement read. “Our hearts ache for our friends and the families affected by this tragic event.”

On the ground, a person who was in or near a car where the plane crashed was injured, while two people were treated for smoke inhalation.

Most of the passengers had ties to Global Data Systems, a Lafayette-based tech company.

Crisp was vice president of operations, according to the business’ swebsite.  Biggs, according to his LinkedIn profile, was a pilot and aircraft manager for GDS. Berzas started working with the company in 2012 and is currently its vice president of sales and marketing, according to the hospital.  Chris Vincent was the company’s CEO, The Advocate reported. The newspaper also reported that McCord was friends with Gretchen Vincent and had accepted a last-minute invitation to fly with them to the game.