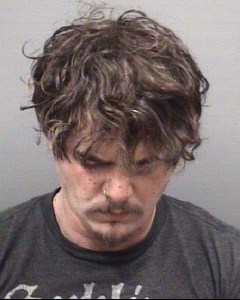 The incident occurred on Monday at 11:30 a.m. at the North Main Street entrance. Bridges was asked by deputies Tommy Duncan and Debbie Yokley to remove his boots before going through the metal detector, according to Sheriff’s Capt. John Sifford.

Bridges told the deputies he just had to pay a fine and became angry about having to take off his boots. He threw the boots onto the conveyor and began cursing. The deputies asked Bridges to calm down and they would get him in and out as quickly as they could.

Yokley told Bridges to place his hands behind his back and said that he was under arrest. Yokley had his right wrist in cuffs and Bridges refused to move his left behind his back. Deputy Duncan began to assist in the arrest. The two called for assistance and got responses from Deputy Howell, Sgt. Jakupovic and Lt. Rucker.

Officers had to take Bridges down to the ground; in the process, Sgt. Jakupovic injured his shoulder. Sifford said upon checking with his doctor, the officer learned he’d fractured his shoulder in two places. Additional charges are possible, according to Sifford. No weapons were found on Bridges.

Sifford said Bridges remained out of control after being booked into the jail. He broke a camera in the detox holding area and so the deputies had to place him in a restraint chair. They also had to pepper spray him.

Bridges remains in the Rowan County Detention Center under a $2,500 secured bond.