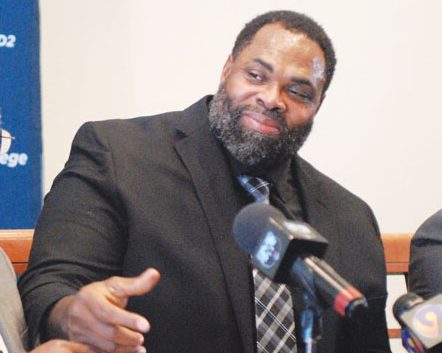 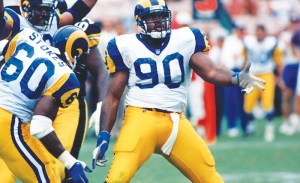 Pittsburghsportsnow.com photo …
Sean Gilbert, the third overall pick in the 1992 NFL Draft by the Los Angeles Rams, is shown during an NFL game against the Pittsburgh Steelers. Gilbert was named head football coach at Livingstone College on Thursday.

Gilbert, a former first-round pick who had an 11-year career, including five seasons as a Carolina Panther, comes to Livingstone, despite a lack of college football coaching experience. Since Gilbert’s retirement in 2003, he has been a high school assistant coach at South Mecklenburg and West Charlotte, in addition to working in his own non-profit organization — Nerih.

Gilbert, 49, fills the position left vacant when Daryl Williams was not retained, following last season. Williams’ teams were 22-46 during his seven seasons at Livingstone, with only one winning season (2015). Last fall, LC began 4-0, but then, lost the final six games, including four lop-sided home setbacks — three by shutouts.

Dr. Jimmy R. Jenkins Sr., Livingstone’s president, and Lamonte Massie-Sampson, the school’s athletic director, agreed that they were impressed with Gilbert and what he can bring to the college.

“Separate from the part that we believe that Sean Gilbert knows football, we were more impressed by the work he has done outside of the sport, such as starting a non-profit organization,” said Jenkins. “Freedom is defined as the opportunity to make decisions and character is about the ability to make the right decisions. Mr. Gilbert convinced me that he was about education and helping his student athletes make right decisions.”

Jenkins went on to say that there were many candidates for the position and any of the top three “would have been quality members of our family. But I believe Mr. Gilbert stands head and shoulders above the others because of the work he is doing outside of football, which compliments our holistic values curriculum. I believe he will be a great role model, for our student athletes in particular, and our entire student body in general. Needless to say, we expect to win football games as well.”

Gilbert has put in eight years as a volunteer assistant coach in Charlotte. He explained that he helped his head coaches with team structure and discipline but the experience has also been very important for him, personally.

“I actually used those schools to tutor myself, because coming out of the NFL and going out into the world is a transition.” said Gilbert. “You think that everybody is thinking like you do, but they don’t. You have to kind of humble yourself and reinstitute yourself into society. I spent my time learning people again. You have to learn how to communicate in a different way.

“The appealing thing about coming to Livingstone is you want to go where you can have an impact,” continued Gilbert. “The football part is secondary. You want to go where you’re needed. Dr. Jenkins and I agree on what we’d like to see from young men here, beyond the game of football. That’s what made this job attractive to me.”

A native of Aliquippa, Pa., Gilbert played football and graduated from the football-rich and somewhat famous Aliquippa High School. Gilbert is listed among the school’s notable alumni, right along with former Chicago Bears head coach and TV analyst Mike Ditka.

Gilbert then went on to football greatness at the University of Pittsburgh, before being selected by the Los Angeles Rams in the first round (third overall pick) of the 1992 NFL Draft. He played four years with the Rams, including 1993, when his 81 tackles and 10.5 QB sacks earned him a spot in the Pro Bowl.

In 2003, his final pro season, Gilbert saw action in six games with the Oakland Raiders.

According to Livingstone’s release, Gilbert, along with his mother, Aileen, started Nerih, a non-profit that helps build youth and adults through quality education programs, and assists in developing affordable housing. Nerih partnered with local organizations to build a sports complex to provide recreational programs. Nerih also received a federal grant from the Department of Education to start a leadership and development center.

Gilbert has been inducted into the Beaver County (Pa.) Sports Hall of Fame and the Western Pennsylvania Interscholastic Athletic League Hall of Fame. Aliquippa High has retired his No. 71 jersey and the city presented him with a flag and proclamation.

“Again, I thank Dr. Jenkins and Coach Massie-Sampson for affording me the opportunity to serve as the football coach for this great institution,” said Gilbert. “This is an awesome opportunity. For me, football allowed an opportunity to escape some of the hard realities of life and was my vehicle for upward mobility. Today, I’m convinced, more than ever, that education is the surest vehicle to upward mobility in this world.

“That’s why, after 11 years of playing in the game, I spent the next 15 years, age specifically in high schools, mentoring young men,” continued Gilbert. “It was about helping them find direction, helping them find purpose, helping them know that one day that might have a chance to know that football is a tool, one that we’ll use to help them find out who they really are. This opportunity is very humbling and I’m very grateful for it. And, I don’t take it lightly.”

Massie-Sampson said that there are 65 football student athletes who are currently going through winter conditioning. He added that Gilbert and his new staff will “hit the ground running,” in recruiting new Blue Bears.

“We need strong men as role models and you exemplify those qualities,” Massie-Sampson told Gilbert, during the press conference. “We need coaches who are going to come in and work hard, roll their sleeves up and lead by example. We have a lot of hungry student athletes who, all they want, is great leadership. I know that you will come in, with enthusiasm, and take us in the direction that we need to go.”

Two members of Gilbert’s new staff were present on Thursday — Andrew Jordan, who will coach the offensive line, and Mike Austin, slated as assistant head coach and defensive coordinator.

Jordan is also a former NFL player. He is a West Charlotte alum and played at Western Carolina. Jordan, a tight end, was picked in the sixth round of the 1994 NFL Draft by the Minnesota Vikings.

Jordan played seven seasons in Minnesota, and one each in Philadelphia and Tampa Bay. For his career, Jordan had 100 catches in 92 games, including four touchdowns. He retired in 2001 and most recently, has been on the football staff at J.M. Robinson High School.

Austin played and graduated from Livingstone. He was also an assistant coach for the Blue Bears, on the staff of George Johnson, in the early 2000s. As a player in the late 1990s, Austin was a member of a championship squad at Livingstone, under coach Rudy Abrams.