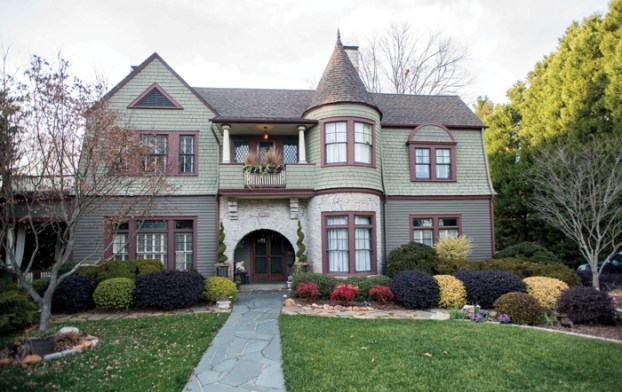 JON C. LAKEY/SALISBURY POST The home of Jon Planovsky and Bob Lambrecht at 124 Ellis Street is under application for a local historic landmark designation from the Historic Preservation Cpommittee. Salisbury,North Carolina,1/9/20.

SALISBURY — The Historic Preservation Commission on Thursday approved the pre-application process to give a home at 124 S. Ellis St. a local historic landmark designation.

The house was built in 1891, and Beulah Stewart Moore was the homeowner and an artist.

The home is Victorian with shingle style with engaged tower, a Richardson Romanesque central entrance of uncoursed fieldstone. The roof originally had wooden shingles, but it was later replaced with asphalt shingles.

Moore (1865-1949) was the daughter and granddaughter of the Salisbury Watchman editors. She was a founding member and first president of Travelers Club, the first group to advocate for a public library. She was also the first woman to run for mayor in Salisbury.

Applicant and owner Jon Planovsky said many of the alterations made to the house were by Moore herself. Planovsky said she once plugged up the home’s eight fireplaces with newspapers and put in steam heat, which she later got rid of.

Chair Andrew Walker said that part of the commission’s decision is subjective. Walker said this property and the people who lived there were significant to Salisbury.

Member Sue McHugh said she was worried about the additions made to the home at first, but later was in favor of the application because those changes were made by Moore.

In another matter, the final application for Grubb-Sigmon-Weisiger House, at 213 S. McCoy St., was approved by the Historic Preservation Commission. The application to make it a local historic landmark designation will now go to city council for final approval.

Applicant Karen C. Lilly-Bowyer and owners Roy and Norma Campbell began the application in April 2018. After much back and forth with the state, the State Historic Preservation Office, returned their comments in January.

Lilly-Bowyer talked  about of one of the original owners, Ross Ninish Sigmon. He was the developer of the Milford Hills area, which had big, Colonial-style homes on the outskirts of the neighborhood and smaller houses inside.

She said it is significant that Sigmon saw the importance of keeping the home as it was while he was building the new residential area of Milford Hills.

Walker had some issues with the home’s changes since it was built. It doesn’t have the original roof or roof material. The home was rotated. And a garage was built on the property in 1997. He eventually voted “no” on the application.

Member Elizabeth Trick said it is significant that the property still has the original outhouses, guest house and playhouse.

Two-thirds of the property will be designated as landmark, not the area where the garage sits.

• The commission approved OK’d Michael Kepley, with Salisbury Community Development Center, to make changes to a 803 N. Main St. home. The changes include removing a tree on the property, adding exterior lighting and demolishing a sunroom. The commission tabled the closing of openings after the sunroom is removed to get more information about the original windows or doors of the home.

• The commission also approved an after-the-fact removal of a Deodar Cedar tree at 602 S. Fulton Street. Chip Short, the owner, said he would replace the tree, per the commission’s guidelines.