‘We’re putting you in an ambulance’: Man rescued after… 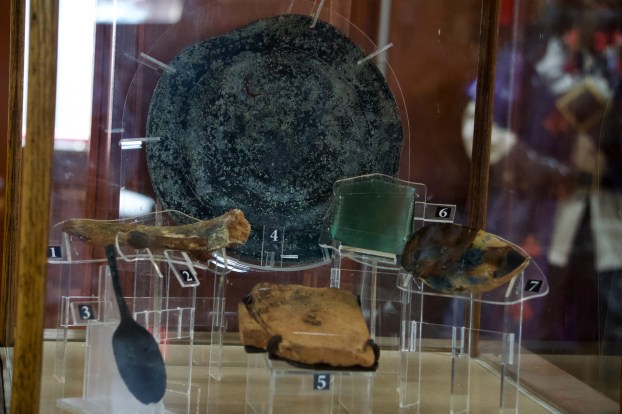 Carl Blankenship/Salisbury Post – The artifacts on display were small items. Show are some materials found on the ship like glass from storage containers and utensils

SPENCER – The infamous pirate Blackbeard was beheaded in North Carolina waters more than 300 years ago. It was not until 1996 that his infamous ship, Queen Anne’s Revenge, was discovered by a private company.

Despite the ship’s close association with Blackbeard, the pirate captain was aboard the ship with about 300 crewmembers for less than a year. The end of Queen Ann was not the end of his piracy career. He accepted a pardon for his crimes but later returned to his criminal career, which eventually resulted in his death.

Blackbeard, as well as 17th and 18th century piracy are the subject of a traveling exhibit currently housed in the N.C. Transportation Museum. Standard admission pays for access to the museum’s regular material and the exhibit which features artifacts from the remains of Queen Anne’s Revenge.

“While it’s very easy for us to tell a railroading story or a story about airplanes or trucks, it’s a little more difficult for us to explore this maritime history, so it’s a great way for us to do it,” N.C. Transportation Museum spokesman Mark Brown said.

Artifacts recovered from the wreckage are all encased in glass displays, organized by subject matter. Tools, ship materials, and cannon shot are all on display, but the exhibit is about more than just Blackbeard. There is information piracy from the period as well. Printed information and a handful of touch screens around the room have menus let museum-goers dive into how pirates dressed, their weapons, tools and how they used them, what medicine was like onboard and the the ship contracts to which sailors agreed.

A model of the ship in the middle of the room showed features it would have had, like how much firepower the ship could put out from its sides.

“That ship was loaded down with cannons all across the side and so they had a lot of artillery onboard,” Brown said.

One of the videos on the display pointed out pirates were primarily sailors, and the way they dressed was about the same as other, non-criminal sailors would be dressed while at sea. They wore small, practical caps that would not blow off their heads easily and small jackets that would stay out of the way while performing rigging work.

The exhibit has been making its way around museums for the past few years. It will stay in Spencer through March 29. On Feb. 29 the museum is having a pirate day.

Brown said the display ranks high on the list of temporary exhibits the museum has had, close to the North Carolina barbecue exhibit for his favorites.

The mobile exhibit was created by the North Carolina Department of Natural and Cultural Resources, and the department has been refreshed since the museum hosted the exhibit in 2018.

The exhibit first debuted in 2017 at the N.C. State Fair.