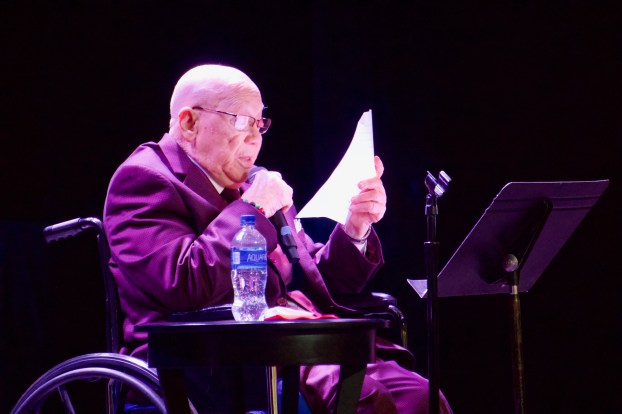 Carl Blankenship/Salisbury Post – Civil Rights Movement activist Rev. Jesse Douglas speaking to the students at Salisbury High School on Wednesday. Douglas spoke to students about growing up in a poor family and his activism during the movement.

SALISBURY – Rev. Jesse Douglas has pale skin, blonde hair and blue eyes, but he is not white.

Douglas has albinism. He stands out in photos where he is marching next to Rev. Martin Luther King Jr. because of his skin color and sunglasses. In one photo can be seen shielding his head from the sun just behind King.

Douglas was an activist leader during the civil rights movement. He marched, spoke and participated in protests. Douglas and his friends staged a sit in where he led by using his appearance to be served in a “whites-only” establishment. After he was served, the other activists filed in and demanded to be served. Everyone but Douglas was arrested.

That was one of the stories Douglas told at Salisbury High School’s packed auditorium on Thursday.

Douglas lives just outside of Charlotte, and Assistant Principal Michelle Taylor connected with his daughter almost by accident. When Taylor found out who her father was, she immediately wanted to arrange for Douglas to speak to students during Black History Month.

Before jumping into his stories about the movement, Douglas implored students to place an importance on their education, noting that dreams are not made by what you think you know but what you do know and how you can apply it.

“I always enjoy talking to young people because it takes my mind back to the days when I was sitting where you’re sitting,” Douglas said.

Douglas was born in New Orleans in 1930 to a poor family and was the first of five siblings. His father was a disabled veteran who received only $30 a month. His mother worked six days a week as a housekeeper and only took home $3 each week.

The program suffered a delay that cut into the original 50 minutes the school had carved out for Douglas to speak and, when he was told time was running out, the audience chimed to tell Douglas to keep going. Other than encouraging Douglas to keep talking and giving standing ovations, the audience was completely silent while Douglas was speaking.

Douglas talked about his experiences during the movement and took some time to tell students about the Selma-to-Montgomery Marches in Alabama. He recalled King kneeling to pray when the march reached Edmund Pettus Bridge with the marchers. King did not want to subject the marchers to the violence they experienced from Alabama state troopers during the first march, which became known as Bloody Sunday. The third march was protected by federal soldiers and law enforcement and made it all the way to Montgomery.

Principal Luke Brown got on stage at the end of the talk and implored students to understand the value of what they had just heard.

“I don’t think you understand the magnitude of the opportunity that you have to hear from this man,” Brown said. “He changed, with his friends, the course of history for the United States forever, and I just want to publicly say: Dr. Douglas, thank you so much for taking time out of your busy schedule to come speak to our students.”

Douglas said he does talks like Thursday’s to try to help put young people on the path to achieve their goals.

“I’m a minister of the Gospel and have been for 60 some odd years or more. That’s my job,” Douglas said.

Christopher Green, who is a sophomore who moved to Salisbury this week, said the experience of seeing Douglas speak was surreal.

“Hopefully I learn from it, take good things out of it and am able to help people,” Green said.