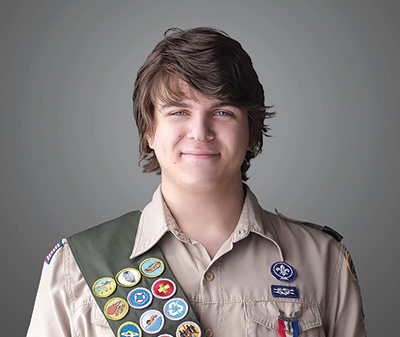 Will began his Scouting journey in Pack 328 in China Grove and eventually found a new Scouting home as a member of Pack 442.  He earned the Cub Scouts’ highest award, the Arrow of Light, as well as the God & Me and God & Family awards.  As member of Scouts BSA Troop 442, Will earned 35 merit badges and received his Eagle award with a Gold Palm in recognition of that extra achievement.  He completed the Introduction to Leadership Skills for Troops course and served as Troop Librarian.  Will is a member of the Order of the Arrow and earned the God & Church award.  Along with other members of Troop 442, he experienced many camping trips, including winter survival and summer “shipwreck” survival trips, as well as weeks of summer camp at Camp Daniel Boone and Camp John J. Barnhardt.  He participated in numerous community service projects, including a National Public Lands Day project for several years, cleaning trash from the Yadkin River.

A senior at Jesse Carson High School, Will is a member of Student Council, National Honor Society, Fine Arts Academy and ACT/SAT Hall of Fame.  Will was a keyboardist in Marching Band for three years and served as a Section Leader for one season.  He is also in Crosby Scholars and plans to study illustration in college.  He is an active member of First United Methodist Church of Salisbury.

For his Eagle Scout leadership service project, Will supervised a team of volunteers in the acquisition and planting of a privacy hedge at Main Street Mission, a food and clothing pantry in China Grove, NC.

Will is the son of Sue and Tim Bivens of China Grove.