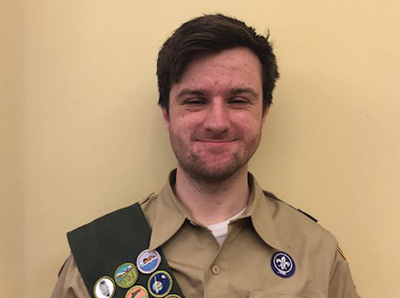 Patrick Michael Howard, 18, received his Eagle Scout award on Sunday, February 2, 2020, at First United Methodist Church of Salisbury. The award was presented by his Scoutmaster, David B. Wilson.

Patrick earned the Cub Scouts’ highest award, the Arrow of Light. As a member of Scouts BSA Troop 442, Patrick earned 28 merit badges and received his Eagle award with a Bronze Palm in recognition of that extra achievement. He completed the Introduction to Leadership Skills for Troops and National Youth Leader Training courses and served as Patrol Leader, Quartermaster, Outdoor Ethics Guide and Assistant Senior Patrol Leader. Patrick is a member of the Order of the Arrow and earned the God & Church award. Patrick earned two 50-Miler awards for canoeing and earned a third one for backpacking at Philmont Scout Ranch in New Mexico. He also served on the staff at Camp John J. Barnhardt. Along with other members of Troop 442, he participated in a National Public Lands Day project for several years, cleaning trash from the Yadkin River.

A senior at East Rowan High School, Patrick is president of the Tri-M Music Honor Society. He is in the Jazz Band as well as the Mustang Regiment Marching Band, serving as a section leader for one year and co-Drum Major for two years. Patrick is a member of First United Methodist Church of Salisbury.

For his Eagle Scout leadership service project, Patrick supervised a team of volunteers in the installation of a sound garden in the children’s play area at Providence United Methodist Church, where he volunteers as a member of the praise band.

Patrick is the son of Tim and Kim Howard of Salisbury.