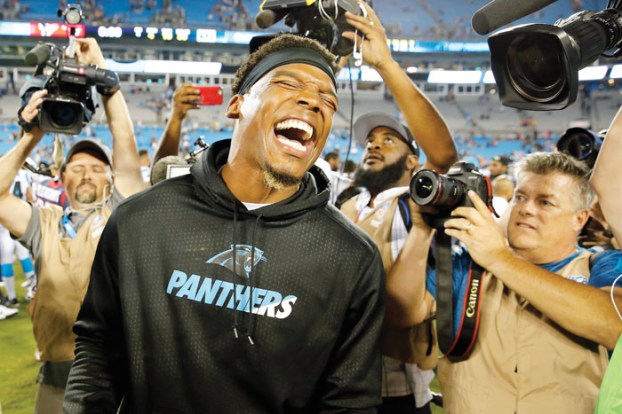 FILE - In this Aug. 9, 2017, file photo, Carolina Panthers quarterback Cam Newton laughs after the second half of an NFL preseason football game against the Houston Texans, in Charlotte, N.C. The Panthers are parting ways with Cam Newton. Carolina general manager Marty Hurney said Tuesday, March 17, 2020, via Twitter the team is giving the 31-year-old quarterback permission to seek a trade _ although the former league MVP responded by saying he never requested one. (AP Photo/Jason E. Miczek)

End of an era in Charlotte ... 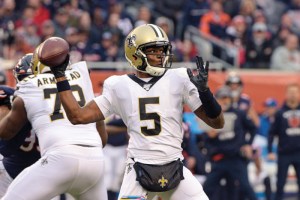 AP Photo/Mark Black, File … New Orleans Saints quarterback Teddy Bridgewater (5) throws against the Chicago Bears during a game last season. According to reports on Tuesday night, Bridgewater will sign as a free agent with the Carolina Panthers.

CHARLOTTE (AP) — The Panthers have found a replacement for Cam Newton — and it didn’t take long.

The Panthers have agreed to a three-year, $63 million contract with free agent quarterback Teddy Bridgewater, a person familiar with the negotiations told The Associated Press.

The person spoke on condition of anonymity on Tuesday because the deal cannot be announced until the start of the league year on Wednesday.

The Panthers announced earlier Tuesday they were parting ways with Newton, their No. 1 overall pick in 2011.

The 27-year-old Bridgewater started five games last season for the Saints, going 5-0 while completing 68% of his passes with nine touchdowns and two interceptions. He has spent the last two seasons in New Orleans after four with the Vikings.

Bridgewater previously worked one season in New Orleans with Joe Brady, who is now Carolina’s offensive coordinator, and has some familiarity with the offensive scheme.

Carolina general manager Marty Hurney said Tuesday via Twitter the team is giving the 31-year-old Newtown permission to seek a trade — although the former league MVP responded by saying he never requested one.

“Every year difficult decisions are made and they are never easy,” Hurney said. “We have been working with Cam and his agent to find the best fit for him moving forward and he will always be a Carolina Panther in our hearts.”

Newton was quick to respond to the Panthers on social media, saying he didn’t ask for a trade .

“Stop the word play!!” Newton tweeted. “I never asked for it!! There is no dodging this one; I love the Panthers to death and will always love you guys!! Please do not try and play me or manipulate the narrative and act like I wanted this: You forced me into this.”

Newton has battled shoulder and foot injuries the last two seasons and lost his last eight starts for the Panthers.

Newton made the Pro Bowl three times and was the NFL’s MVP in 2015 when he led the Panthers to the Super Bowl. He holds most of the franchise’s passing records and has run for more touchdowns than any QB in league history.

But questions have swirled around Newton’s health. He is coming off Lisfranc fracture in his left foot and there is still some concern over his recovery from shoulder surgery prior to the 2019 season. There is also a financial element involved: The Panthers can save $19 million under the 2020 salary cap if they trade or release Newton.

Panthers owner David Tepper, who has been noncommittal on Newton’s future with the team ever since last season, released what amounted to a goodbye statement Tuesday on Twitter saying “I wish him all of the best.”

“He’s one of the all-time greats in Panthers history,” Tepper said. “If you ask any of our fans for their most memorable moments, I’m willing to bet that most of them will include Cam — electrifying plays, giving away footballs after touchdowns, fun celebrations and big wins. His competitive and drive and rare. Off the field, you can’t measure Cam’s contributions. He has touched the lives of youths throughout the Carolinas and the Atlanta.”

The decision to part ways with Newton is the latest in a complete organizational overhaul.

The team fired two-time Associated Press NFL Coach of the Year Ron Rivera with four games left in last season and hired a college coach, Baylor’s Matt Rhule, this offseason to take over. Nearly the entire coaching staff is new, including Brady.

Kyle Allen and Will Grier are the other QBs on the Panthers roster.

PANTHERS’ NEEDS: Carolina is in rebuilding mode and has already moved on from QB Cam Newton with owner David Tepper saying “I wish him well.” The Panthers have told the 2015 league MVP he is free to seek a trade as they pursue free agent QB Teddy Bridgewater as a potential replacement. The Panthers also need to replace retired middle linebacker and perennial All-Pro selection Luke Kuechly.  Carolina is expected to sign defensive end Stephen Weatherly from Minnesota and defensive back Juston Burris from Cleveland to replace cornerback James Bradberry and defensive end Mario Addison, both of whom are expected to sign elsewhere on Wednesday.