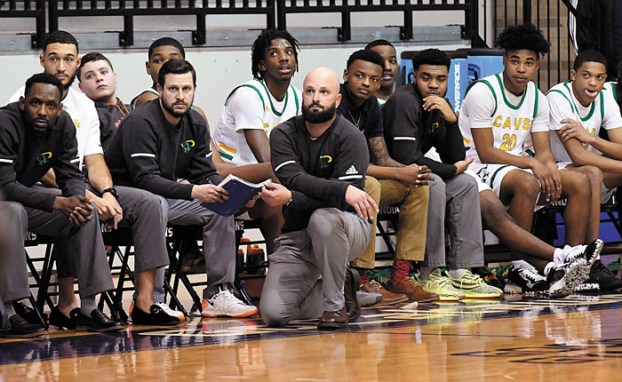 Wayne Hinshaw file photo/for the Salisbury Post ... North Rowan coach Jason Causby, center, during the final seconds of a loss to East Rowan in December. The defeat was a turning point for the Cavs’ season. 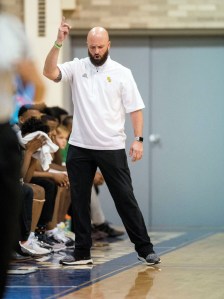 SPENCER —From embarrassment to redemption, North Rowan’s boys provided a wild ride during a 2019-20 basketball season.

It was a journey that yielded a share of the regular-season title in the Yadkin Valley Conference, a conference tournament crown and two playoff wins.

There’s not much doubt that North coach Jason Causby’s team improved the most, from start to finish, in Rowan County. Causby shares coach of the year honors with Salisbury’s Bryan Withers, who coached the best boys team, albeit a snake-bit one.

It’s the third time Causby has been honored. With 221 career wins, he’s now sixth on Rowan’s all-time wins list for boys basketball. The five ahead of him (Mike Gurley, Bob Hundley, Sam Gealy, Bob Pharr and Walt Baker) are in the Salisbury-Rowan Hall of Fame.

Causby admitted North Rowan was a “train-wreck” last summer, losing frequently to less talented teams. North had an odd mix —  too many big guys, too few ball-handlers, not enough shooters. The only returning starter was junior Kendrell Goodes, who had scored 5.4 points per game. Reserves who were cast in  supporting roles on a powerful 28-3 team now had to be the leading men.

“We had new faces, and the old faces we had were in new roles,” Causby said. “We’d lost our four top guys (Rowan Player of the Year Dayjuwon Cooke and YVC Player of the Year Brevin Goodlett  and floor general Derrick Page). It was almost painful to watch us early in the season, but we still had some talent, so it’s not like anyone felt sorry for us.”

North had some early struggles, but made it to Christmas with a 5-1 record. That was good news and bad news.

“When A.L. Brown lost two games down in South Carolina right before the Christmas tournament, it made us the No. 1 seed,” Causby said. “But I knew we weren’t the best team. We didn’t have the experience for that, and that No. 1 seed put some pressure on us. We weren’t very good.”

In the first round of the tournament, North lost to an eighth-seeded East Rowan team that wouldn’t win again the rest of the season. North managed a consolation victory against West Rowan, but then was wiped out by Carson in the fifth-place game, losing by 27. Carson would finish 11-14.

“I still felt like we were going to be fine at some point,” Causby said. “I didn’t know how long it would take, but I  was starting to believe we were on the verge of being pretty special.”

In January, there were two more disappointments in YVC games, including a brutal 54-30 loss to YVC opponent Chatham Central in Spencer.

“A bad game, but I give a lot of credit to our guys for being resilient,” Causby said. “It was never a question of guys accepting their roles — they did that from the start. It was just a matter of getting comfortable in those roles. Every day we just went back to work and tried to get better.”

The work paid off. North avenged the Chatham Central loss — convincingly — on the road. There was a stretch of 12 games in which North’s only loss was to national power Moravian Prep.

Dominant games became more frequent for 6-foot-10 sophomore Brandon White, a young man who has the highest ceiling of any player in the county. Five Cavaliers — Goodes, White, Denerio Robinson, Quashawn Carpenter and Zay Davis — averaged between 8 and 12 points. Brandon Jefferson and James Gladden had their moments. North scored 10 points per game fewer than it had the previous season, but the shot-blocking defense was good, holding opponent to 50 points per game.

“Denerio finally got to be a lead dog as a senior, and he was our rock, our most consistent guy from June to March,” Causby said. “Zay gave us a lot of different things. In an uptempo game, he might be our leading scorer. But if it was a grinder, he’d take on the toughest defensive assignment.”

North won a rubber match with Chatham Central to take the YVC tournament. Then the Cavaliers won two playoff games, beating an inspired North Stanly team for the third time on a clutch shot by Robinson and getting 20 points from Carpenter, a sophomore guard, to beat North Stokes.

North’s season finally ended with a 71-51 loss to a Winston-Salem Prep team that might be the best in 1A. A year ago, North was eliminated from the playoffs in the regional final by a Bishop McGuinness team that won the state title.

“We didn’t start well, but  we didn’t play badly in a tough road game at Prep,” Causby said. “Our guys came a long way this season. We went from scratching our heads in December to patting ourselves on the back.”

North went 22-8 and what looked like a certain rebuilding year instead changed into a nice bridge season between the great team of 2018-19 and another  potentially great team in 2020-21. Some guys who always had been  back-seat guys in the past, drove the Cavaliers to championships in that “bridge season.” Causby was thrilled to see them break out.

“That team we had last season was fun, and my job as a coach was to not mess things up,” Causby said. “This season, we had a few embarrassing performances, but we never folded. We didn’t stop working. We kept improving. I’m extremely proud of where we ended up, proud of what we were able to accomplish. I think this team maximized.”