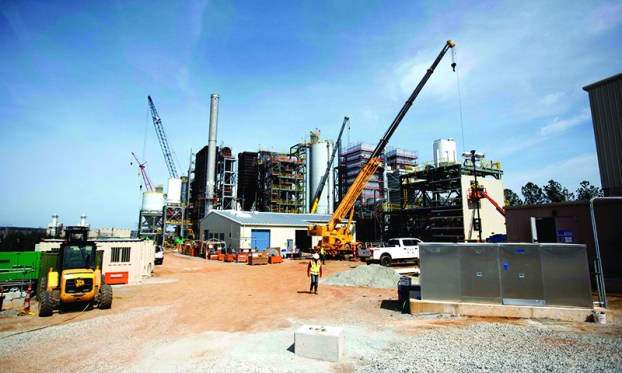 JON C. LAKEY/SALISBURY POST Several cranes and lifts circle the new facility that is being built at Duke Energy's Buck site. Construction continues on a Duke Energy facility near the Buck Combined Cycle plant on Dukeville Road. The new construction is a processing plant that will take spent coal ash from the nearby holding basins and recycle the material. For decades a former steam plant burned coal to make energy through steam process with coal ash as the left over material which eventually became an environmental concern for nearby water contamination into nearby wells and the adjacent Yadkin River. Salisbury,North Carolina,3/9/20.

Duke Energy announced local coal ash excavation plans in 2016 following a mandate from a court settlement. Residents will see the results of that win for environmental quality in September, when a Buck Steam Station recycling unit is scheduled to begin operation.

Following concerns years ago about water contamination and accumulated coal ash in the rural Dukeville area, a court settlement in 2016 that included Yadkin Riverkeeper, the Waterkeeper Alliance and Duke Energy prompted full excavation and/or recycling of coal ash at Buck Steam Station. And the Coal Ash Management Act of 2016 required Duke to provide clean water to local residents, which resulted in a municipal water line in Rowan County.

The act also required Duke to establish three coal ash recycling units across the state, which will provide additional processing for concrete. Buck Steam Station received the first of those three units. The remaining two will be located at the H.F. Lee plant in Goldsboro that will open in October, and Cape Fear plant in Moncure that will open in December.

Norton said that once all three recycling facilities are operating, the units will be able to recycle more coal ash — both old and new — in a given year than the six remaining coal-fired facilities in the Carolinas can produce. This amounts to 400,000 tons of ash per year per unit.

The start-up phase for Buck will take place in mid-summer, Norton said, which is when all the systems will be vetted before operation begins. So far, 250-350 construction workers have been employed to construct the plant, and Duke expects about 15 staff members at each facility. Additionally, Duke will need 30-35 truck drivers for each facility.

When completed, each unit will comprise a few acres of land and look like typical, small power plants. But the emissions building at the Buck station will reach 140 feet tall, and the storage dome will be 120 feet tall.

Recycling the ash has an economic impact to Duke as it’s less costly than disposing in a new location. As for an environmental impact, the recycling units will extract excess carbon, which makes it useable for concrete for strong structures like bridges.

“The most important thing is that we’re putting this coal ash to productive use,” said Duke Energy spokesman Bill Norton, adding that the proceeds from the repurposed ash ultimately offset the cost to create the recycling units.

Edgar Miller, who serves as the executive director of the Yadkin Riverkeeper, acknowledged that the settlement agreement was a good start in the right direction to get the coal ash away from the river.

“We support the beneficial reuse of coal ash where possible,” he said.

A concern for Miller remains the quality of the groundwater, which he said will require “the proof in the pudding” in Duke’s plans.* Additionally, Miller said, it’s important to ensure there is proper monitoring and oversight of the air quality and emission of heavy metals associated with coal ash.

Norton said that regular surface water testing at Yadkin River is conducted throughout the year, and all tests thus far declare the water is safe from coal ash impact. Duke has to follow permitted outfall limits to ensure the continued safety of the river,* as well.

Duke submitted closure plans in December 2019 for the coal ash excavations. If not recycled, the coal ash can be transported to a lined landfill away from groundwater and the Yadkin River, according to the settlement.

In January, the coal ash debate was settled after Duke, state regulators and environmental advocacy groups agreed to permanently close Duke’s remaining nine coal ash basins in the state by excavating the ash to lined landfills.