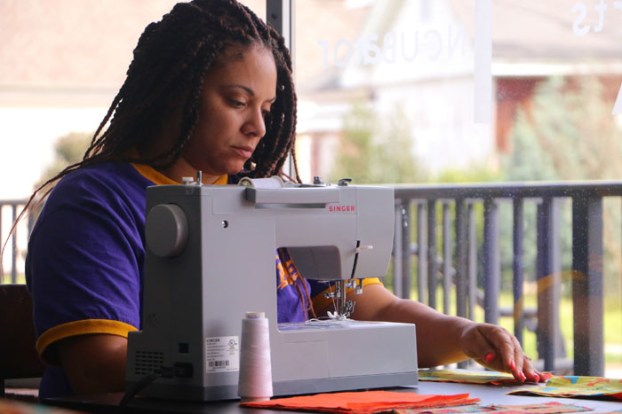 Sabrina Harris owns Vibes, an African-American arts incubator in the Fulton Heights neighborhood, and has turned to sewing facial masks for the past two weeks.

SALISBURY — Each day for the last two weeks, Sabrina Harris has set out to use her skills as a fashion designer to create cloth facemasks for those in need during the COVID-19 outbreak.

Harris is the owner and curator of Vibes, an art incubator in the Fulton Heights neighborhood at 1024 S. Fulton St. That’s also the site of her mask-making workspace. Harris’ mother and Vibes creative consultant Bailey Winger inspired the designer to use what material she had on hand to create masks for people in the community at no cost. Harris said she’d heard about some people selling the masks, which motivated her to give hers away.

“It should be free of charge because the goal is to save people’s lives,” Harris said.

It was an easy decision for Harris to help others. She said, otherwise, she would’ve been sitting at home and doing nothing.

“I wanted to make a difference and help as many people as I could by giving them a free mask,” she said.

She’s given away nearly 100 masks and expects to give out 150 more in the coming week. She’s now enlisted her mother to help her sew.

LJ Johnson, known under the professional moniker of Yeddi Lino, is a photographer who also helps out. Johnson said he can’t sew but he’s helped Harris cut out patterns. Harris does the assembling and sewing.

She’s been working around the clock from 6 a.m. to, sometimes, 9 p.m. and averages about 12 masks a day.

Harris has given masks to nurses at Novant Health in Charlotte.

“The masks are going to nurses first and then from there to people who have immunodeficiencies,” she said.

She’s asked the general public to hold off so that she can help meet the needs of nurses and healthcare workers who’ve personally asked her for masks.

Harris said also knows a number of people undergoing chemotherapy who’ve asked for a mask. Johnson, who has asthma, said he also has Mason brothers who have lung issues, including COPD and bronchitis.

“Right now our major priority has been nurses, social workers who say they have no mask at all,” Johnson said.

Harris said mask-making has been a lot of work, but rewarding.

“My soul is satisfied knowing that I’m doing something that is helpful,” she said.

She received a linen donation from Habitat for Humanity on Friday morning. Harris said she’s appreciative of the cloth donations and that any donation she receives is washed in hot water, dried on a high heat setting and pressed for wrinkles before she gets to sewing. It’s a two-day process.

“The orders are coming in faster than I can produce them by myself,” she said.

Johnson is also the owner of the company — Life Is Never Over (LINO) — and during this time, he’s lived out that name more than ever. He’s committed to continuing his love of photography by creating an online exhibition called Porch Portraits.

He said he’s honoring the health recommendations of social distancing but still wants to be creative. He’s asking anyone who is quarantining with their loved ones to connect with him via the Vibes Salisbury Facebook page and request a porch portrait. He’s offering the service for free.

“It’s to show community and love and unity. We will make an online exhibition,” Johnson said.

Johnson said Easter is coming up and so is prom but for those who may not get to wear their outfits, he’s willing to do an impromptu photo session.

“It’s my way of giving back,” Johnson said.

Harris has received fabric donations and money to purchase more material. Anyone who would like to donate fabric can drop off a donation between 9 a.m. and 5 p.m. at the location on South Fulton Street.

Wingler is also donating art kits to children in the area. Wingler has created the coloring pages and has been distributing them at Vibes.

For more information about Vibes, visit vibesalisbury.com to help donate material and facebook.com/VibeSalisbury to watch the live video of the owner, Harris, creating facial masks.