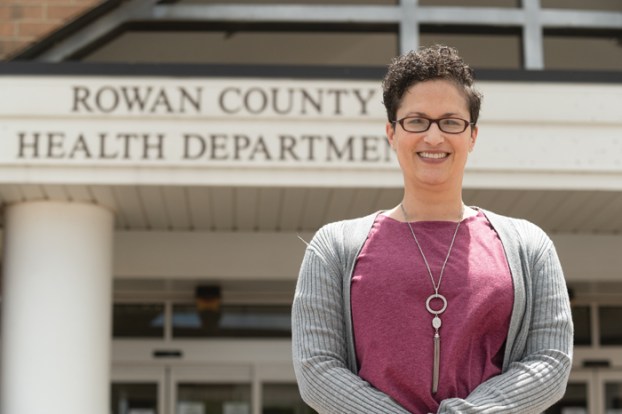 Now her days are consumed with leading the county’s COVID-19 response as public health director on top of being a mother to Charlie, her 8-year-old Chase, 20-year-old stepdaughter Destiny and wife to her husband, Will.

Nina, 41, was born in Massachusetts but spent a big portion of her life, along with two other siblings, being raised by a single mother in New Hampshire. Ironically, she hates the cold, so she welcomed the warm weather of the south when she attended Guilford College, a small liberal arts school in Greensboro.

“As soon as I stepped onto Guilford’s (campus), I felt at home,” Nina said.

She originally wanted to be a lawyer until she heard about the infamous Tuskegee experiment in one of her psychology classes. The unethical experiment was conducted by the U.S. Public Health Service from the 1930s to the 1970s, and it studied the long-term effects of untreated syphillis in black men — despite the availability of treatment. If left untreated, syphillis can damage various organ systems, including the brain and nervous system.

She received a dual bachelor’s degree in psychology and African-American studies in 2001 as well as a master’s in health promotion, with a concentration in substance abuse prevention, in 2003.

Nina has been with the county’s public health department since 2003, where she initially started in dental health education. In 2011, she started working as the planning and preparedness coordinator, a role that she said prepared her for this pandemic. She briefly worked as the interim director of the department before taking on the job permanently in 2014.

Nina said she normally gets to the office around 7:30 a.m. and doesn’t return home until 7 or 7:30 p.m. each day. Virtual meetings start at 8:30 a.m., and she’s used to about 8-10 meetings each day. Those meetings cover information regarding new cases, how investigations are going, briefings on potential outbreaks, daily calls with community leaders and the media as well as meetings with her command team.

The Rowan County Health Department has been conducting a joint response with the county’s Emergency Management Department, which oversees some logistics of treatment and provides medical resources. She added that county leadership has been good at ensuring citizens feel safe and secure.

She frequently receives guidance from her communicable diseases team, who have been conducting contact tracing research.

And while an estimated 95% of her day is spent on mitigating COVID-19 in the community, Nina and her team still have other health issues they’re working on as well. Another issue, in particular, she’s passionate about is drug and opioid abuse. It hits home for her personally, as she lost her sister three years ago to a drug overdose.

Nina’s husband, Will, said her first love is family, despite her deep passion for public health. Will and Nina just celebrated their 13th wedding anniversary in April. But with stay-at-home restrictions in place, they intend to celebrate sometime in the future.

Since Nina’s work has revolved around COVID-19 lately, it has affected the amount of time she is able to spend time with her family. After picking up her children from her mother’s home in Spencer after work and attempting to make dinner after a 12-hour day, she’s usually headed to bed for another full day.

Will, 43, said he only sees her for about an hour each day during the week as they work different shifts. He’s the department manager at SouthWood Corporation, a manufacturing company in Charlotte.

“We have a lifetime together,” Will said. “We’ve been together for 17 years, so our family is strong enough to withstand this.”

Nina says spending time with family is her favorite way to “de-stress.” She finds just being with her family is therapeutic due to the “human touch and love felt.”

They’ve always played board games, but more games are being played lately, and they’re watching more movies, too, on the weekends when they’re at home. She also tries to go on walks with her children.

Additionally, Nina’s mom provided her with a book that includes daily passages that are “good for the soul,” which she tries to stick with throughout the day.

Will said he doesn’t worry too much about the pressure on his wife but says it can be a lot for anyone, calling it a “beautiful struggle” when seeing her passion for public health. Even when she’s away from her work in the office, she says, the worry about how to keep people safe keeps her up at night, especially when she hears stories of healthy individuals catching COVID-19 and dying a few days later.

“Dealing with something unknown is scary,” she said.

Naturally, with a mom who’s public health director, Nina’s family stays well-informed on the coronavirus. Chase understands how germs work and that there is not yet a “shot” to prevent COVID-19. Will is originally from New York and has had family members die from COVID-19. He said being married to someone who’s in public health allows him to constantly inform others and better understand how to follow the guidelines set by leaders and experts.

“Following the rules is the only thing we can do as people,” Will said. “If we can save one person’s life, it’s worth it.”

Nina wants the public to get used to the idea of a “new normal.” While she’s happy with the governor’s plan to reopen in phases if all metrics and objectives are met, she fears “heading backwards” if there is a resurgence of COVID-19 and more deaths.

“I want people to have a real expectation of what the future holds,” Nina said. “It’s not going to just go away.”

She added that a vaccine for a novel virus like COVID-19 can take a year or longer, as even flu shots take months to develop despite being familiar with the flu each year.

“Life can still be good,” she said, “but it will just be different.”