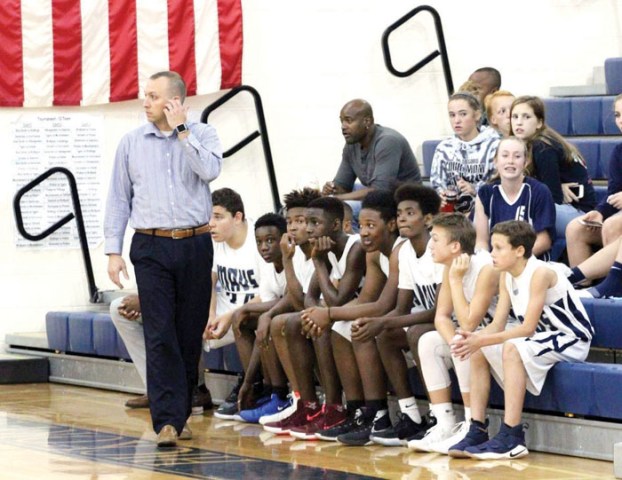 Blevins replaces Andre McCain, who coached the Raiders for five seasons. McCain resigned after the 2019-20 season and is now teaching at Carolina International, a charter school in Concord.

Blevins has a lot going for him, starting with a nice family (wife Amy, boys Cannon, Carson and Corbin and dog Rocky). He lives in Salisbury, so he’ll actually have a much shorter drive to work now. He’s been commuting to Hickory Ridge Middle School in Harrisburg, which isn’t a lot different than driving to Charlotte.

He’s an intelligent guy who holds a biology degree from Western Carolina.

He’s got athletic credibility. He played basketball in high school at East Wilkes, but he was more special in football (his name appears in the NCHSAA record book) and in track and field.

Blevins is 38, which means he’s young enough to give South a stable coaching situation for a number of years, but not so young that he’s going to be overwhelmed by some of the really talented teams that South faces every year in the Central Carolina Conference.

It goes without saying that this is a challenging era for South in boys basketball. Things did improve some when South moved down to 2A, but the Raiders have been 15-60 on the court the last three seasons. South was 1-47 the two seasons before that, when the Raiders were still in the 3A ranks and hopelessly overmatched by much larger Cabarrus schools.

Blevins promises no miracles, but he’s ready to go to work. South AD Angie Chrismon is thrilled to have him on board. There was significant interest in the South job, but Blevins landed it. It will be his first high school head-coaching job.

“It’s a plus to find a coach who will be on campus as a faculty member, but ultimately it was his excitement and student-athlete-centered philosophy that won us over,” Chrismon said. “I think he’ll forge great relationships with his players and that will, in turn, increase the success of our team.”

Blevins’ story starts in the small town of Ronda, which is about seven miles west of Elkin.

The people in Salisbury who have heard of Ronda have heard of that tiny town and East Wilkes High, mostly because of a quarterback that came from there to set all sorts of records at Catawba. Luke Samples quarterbacked the Catawba Indians from 2001-04. Before that, Samples did mind-boggling things at East Wilkes. Blevins helped him do those mind-boggling things as one of his key receivers.

“I was the deep threat for Luke,” Blevins said. “But as good a quarterback a Luke was, I believe he would’ve been even better as a linebacker. He was a hoss. He was not the guy you wanted to draw in a hitting drill.”

Blevins isn’t kidding. There was a 1A state playoff game in 1999 when East Wilkes was taking on Albemarle and superstar running back T.A. McLendon. Samples played safety that night and made 23 tackles. One of those 23 tackles knocked McLendon out of the game, and East Wilkes won 31-14. It still may be the biggest win in school history.

Blevins made his contribution to the record book in 1998, when Samples was directing East Wilkes’ West Coast offense. In a 56-33 loss to Starmount, Samples threw for 561 yards and Blevins had eight receptions for 265 yards. According to the NCHSAA record book, that’s still one of the 20 biggest receiving games in state history. Blevins didn’t do it against stiffs. Starmount won the 1A state championship that season.

There were a lot of football receptions and a lot of yards, but track and field was Blevins’ main thing. He was a 4.5 runner, speed that translated best for him as a hurdler.

“Track and field was my main sport, specifically the 300 intermediate hurdles,” Blevins said. “We were in 1A, but it was very competitive. Track schools like Cummings and Thomasville were in 1A.”

Blevins qualified for the 1A State Track and Field Championships three straight seasons in the hurdles. He placed eighth as a sophomore, third as a junior and fourth as a senior.

Blevins headed to Western Carolina University with every intention of building on his track career, but in college the long hurdling event is the 400 meters, rather than the 300, and he wasn’t as well-suited for the 400.

“So I made the decision to concentrate on my studies and got my degree in biology,” Blevins said. “Then I kind of took the long road to teaching. I worked in the corporate world from 2006 until 2016.”

Blevins and his wife, Amy, settled in Rowan County in 2007. He was working in Concord, while she was working as a labor and delivery nurse at Iredell Memorial Hospital in Statesville. Salisbury was in the middle for their commutes, so they decided to raise their family here.

Blevins’ wife is now working as a nurse for the Rowan-Salisbury schools. Their boys are 11, 8 and 7. Blevins chuckles when he describes them as “rambunctious.”

Four years ago, he made a life change.

“There was a shift in the way things were being done as far as my work and I had time to do some soul-searching,” Blevins said. “I started asking myself if I was doing what I wanted to do and being who I wanted to be. One day, I was playing golf with a friend who was an assistant principal, and a conversation took place that changed my direction.”

Blevins decided to make the dramatic life-change to being a classroom teacher. That meant tackling the lateral-entry route to teaching and taking education courses to supplement his biology degree. He handled that, and with his athletic background,  coaching was a natural next step.

“Middle school coaches are hard to come by, and I was more than willing to do it,” Blevins said. “It worked out very well. I got to coach some talented kids and I was able to build great relationships. When kids that you coached come back to see you or to thank you, it’s a special feeling.”

Blevins has been coaching the boys basketball team at Hickory Ridge Middle School and working as a technology teacher.

“The South Rowan job gives me a chance to get back to science,” Blevins said. “I can’t tell you how many times I’ve driven past South Rowan. It always looked like a good place to be, a nice place in a nice area.”

“Graham can score, and I’m really impressed by (Barrett) Thompson’s defense and competitiveness,” Blevins said. “And (Jayden) Dextraze, he’s pretty big. He’s got the body to be really tough inside.”

Blevins is looking forward to the whole experience. He emphasized that there are a lot of life lessons to be learned beyond what happens on the court.