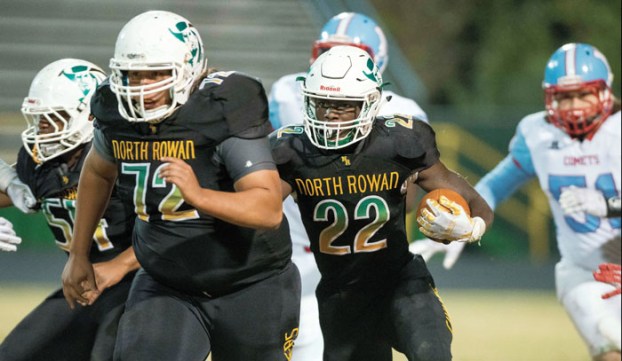 JON C. LAKEY / SALISBURY POST On Oct. 19, 2018, North Rowan’s Malcom Wilson (22) follows behind Justin Hughes (72) as he carries the ball during a game against North Stanly.

SALISBURY — If anyone ever had a reason to be cocky and arrogant and aggravating it was North Rowan running back Malcolm Wilson Jr., who put the ball in the end zone 40 times last fall with 31 touchdowns and nine 2-point conversions.

Wilson, recognized twice as one of the players of the year in Rowan County as well as the 1A Yadkin Valley Conference, totaled 204 points as a senior. That was the first 200-point season in the history of a football program that’s been competing since 1958.

Wilson handled that achievement with so much grace and so much “it’s we-not me” spirit that he’s been announced as the first male winner of the JT Bost Sportsmanship Award, a countywide honor.

“Malcolm was that guy who always handed the ball to the official after a touchdown, always carried himself liked he’d been there before,” former North Rowan head football coach Ben Hampton said. “He also was that guy who was helping teammates and opponents up off the ground.”

Wilson has always tied to do the right thing, even moreso after he lost his father during his junior football season.

Malcolm Wilson Sr. died at 39. Every game after that meant a chance for his son to represent his father on the field. He made some would-be tacklers look mighty foolish, but he never went out of his way to show anyone up.

“Friday nights are when you show your character, not just your football skills,” Wilson said. “It was fun to score touchdowns, but I always tried to be humble if I did score because I knew I didn’t get to the end zone by myself. No back ever got to the end zone without teammates blocking for him, so I always made an effort to celebrate with my teammates.”

Wilson said the Bost Award is a super surprise. Maybe it shouldn’t be.

“One of the most important things we talked about at North, and we talked about it a lot, is that in the big picture, there’s a lot more than football going on out there,” Wilson said. “It’s much bigger than football. Kids were watching. I tried to set a good example.”

Hampton said he always succeeded in that. Wilson was the favorite player of Hampton’s own son and a lot of other youngsters.

“When you talk about a sportsmanship award, Malcolm is the epitome of what a coach wants in a player and what a team needs,” Hampton said. “He was the first to arrive and the last to leave. He set the tone every Friday, whether it was a long kickoff return or running over someone on the first play from scrimmage. He attacked the game of football, but he played it the way it should be played. I know he’ll continue to do that at Barton.”

Wilson planned to run indoor track to keep working on his speed, which is good, but not amazing. When an indoor track team didn’t take shape at North, Wilson rejoined many of his friends and teammates on the basketball team. Basketball is a much different game for him. He’s a role player in hoops, a defense-and-energy guy off the bench. He gushed positive vibes even if he only played five minutes.

“I was thrilled to be back with the basketball guys,” Wilson said. “I enjoyed it.”

North basketball coach Jason Causby was thrilled to get Wilson back. North didn’t need his points, but the Cavaliers, who had a rough time in the Christmas tournament, needed his presence and quiet leadership. Wilson found a way to make the basketball team better every day.

“We sorely missed Malcolm early,” Causby said. “Our basketball team welcomed him with open arms. He talks almost in a whisper, but his character and his presence in a locker room scream a much different story. He’s respectful. He’s gracious. He’s that kid who takes the time to genuinely pour himself into everyone around him. He’s a guy who has scored seven touchdowns in a single game (a county record), but he’s also that guy who will debate with my 10-year-old over whether Giannis is better than LeBron in today’s NBA. He has a very calming influence on everyone around him.”

Wilson was sprinting in track and field this spring, but that season prematurely ended. North won its only meet with Yadkin Valley Conference opponents, at South Davidson.

“We were having fun and we were going to be very good,” Wilson said.

Wilson topped 4,000 career rushing yards in two years as a varsity star, plus a sophomore year as a stellar No. 2 back. He’s seventh on the all-time Rowan County rushing list, but his impact went far beyond the yards and touchdowns.

“We’ll miss him in the hallways at North, even more than we’ll miss him on the field or court,” Causby said. “And that’s saying a lot.”