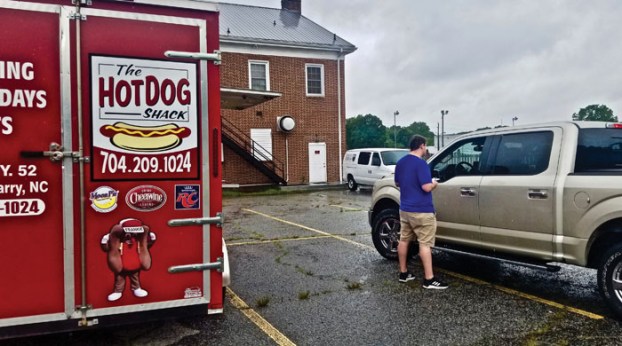 Carl Blankenship/Salisbury Post - Hunter White taking a veteran's order at The Hotdog Shack's mobile unit. The rain did not scare away the veterans, with more than 160 cars filtering through during the afternoon.

SALISBURY — Hot dogs, one of the most patriotic foods, were flying off the grill on Wednesday behind the Elks Lodge on Main Street as veterans and their families filed through in vehicles to get their orders filled.

When the COVID-19 pandemic picked up the pace in Rowan County, it forced Powles Staton Funeral Home to cancel its spring veterans lunch in April. Wednesday was a way of bringing back the lunch series the funeral home has organized for years.

This lunch was a partnership between Rockwell-based Powles Staton, the Salisbury Elks Lodge and The Hotdog Shack in Granite Quarry. The lodge provided the facilities and the restaurant provided the food via its mobile unit.

About 200 people came through the drive-thru — where orders were taken from vehicles and delivered to the veterans. Powles Staton Funeral Director Russ Roakes said the number of meals distributed was higher because there were many cars with multiple people eating lunch.

“This being our first drive-thru, we are very pleased,” Roakes said

The rainy and overcast day did not stop them. Hotdog Shack Owner Jason Smith said several similar events have run into rain and adjustments are made each time. Cars entered through the back parking lot entrance and snake through the line to get their food before exiting at the front entrance on Main Street.

“The weather has never really affected our veterans events,” Roakes said. “They come rain or shine.”

The most popular item on the menu was a hot dog, all the way, with red slaw. Each veteran was given two hot dogs, a bag of chips, a piece of Cheerwine pound cake and a bottle of Cheerwine.

This time around, Elks Lodge Veterans Services Chair Harry Agner contacted Smith, who then asked Powles Staton about holding the event after the funeral home cancelled the April lunch.

Agner said the lodge was looking for alternate ways to spend money for programs it receives from Elks headquarters in Chicago after the pandemic lead to cancellations.

“I’m still getting the money. What am I going to do?” Agner said. “They might the stop the money, and it would be hard to get them to start it back if we don’t keep spending it for the veterans.”

County Commissioners Chair Greg Edds was on hand for most of the lunch to serve veterans. He was delivering food to cars, and he said most people said they enjoyed the chance to get out of the house.

“The veterans are so appreciative, and thankful” Edds said. “They want to be out, and so this is an opportunity for them to get out of the house and see some folks.”

Bob Boss, who served in the Army National Guard for six years and was discharged as a sergeant, said he is better off because of the time in the military and he learned a lot about love for his country.

“I think Memorial Day showed a lot of patriotism from our country to the ones who have passed serving our country,” Boss said.