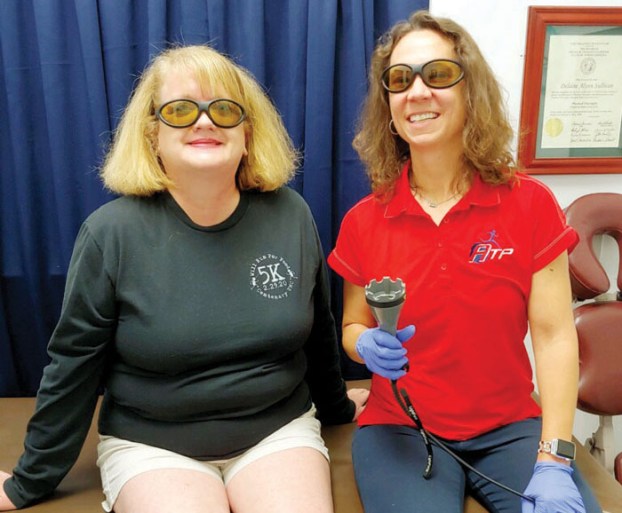 Many of you know Robin Satterwhite from the Post’s 2020 wellness program that she shares with Isaac Miller. Robin didn’t make a lot of progress in March and April due to some knee discomfort, a first for her. When the discomfort lingered, I asked her to see Dr. Delaine Fowler at Accelerate Therapy and Performance. Some start-up knee pain is common for beginning runners, but Robin was well past that.

Robin recapped her symptoms, “On Feb. 29, 2020, I participated in the Will Run for Food 5K at Centenary Methodist Church. This was the third 5K I ran since joining the Salisbury Rowan Runners in spring of 2019. Although I had my best time to date in this event, shortly after the race I began feeling pain in both knees. I assumed I had not stretched properly after completing the race. As the evening and next day wore on, the right knee was fine, but the left one kept giving me tremendous pain.”

She continued, “I had an x-ray a few days later to make sure nothing was torn. At Accelerate, I received excellent treatment from Dr. Fowler and her group of talented physical therapists including Brittany, Kim and Mitch.

With their suggested exercises, my knee began to improve. The therapists took time to explain what was happening in my knee, the cause of the pain, and what the exercises would do to improve muscle strength and therefore alleviate pain. After a few visits, I could feel tremendous improvement. It took a couple months of weekly and sometimes bi-weekly appointments to get back to running without pain.”

Herself a veteran runner and triathlete, Dr. Fowler said, “Robin came to Accelerate with some intense but intermittent knee pain. This was holding her back from making progress in her wellness program. She had limited and painful knee movement and was also limping. We identified specific tight and weak muscles in her hips and legs as the major cause of her issue. I am proud of the effort and patience she put into her rehab. Robin is a thinking person. She really took in the whole picture of how she was going to get better and back to running. We all want our health care providers to touch us and make us better. But the reality is that identifying the true problem and working on correcting by connecting with our bodies is the most effective long-term solution. Robin is a joy to be around. It was my team’s privilege to help her get back to her awesome self.”

Fowler continued, “We treated Robin with specific exercises to strengthen her hip muscles. She was consistent in her home exercise program of these. That had a huge impact on her progress. We also used kinesotape techniques for her knee and Graston soft tissue mobilization to help move around some of the restricted tissue around her knee.”

With the success between patient and physical therapists, Robin is back on the road and track several times a week without pain. Her weight loss has resumed, and her mental well-being has received a boost, too.

Exercise enthusiasts and anyone for that matter won’t need a referral to a physical therapist and most insurances are accepted. Often, physical therapists can provide a first line of defense to address issues, just as they did for Robin. They have helped me multiple times over the years. For more information, go to https://accelerate-pt.com/ .

Actual road racing looks set to resume at the Shiloh Missions 5K in Faith on June 27. Registration is open at Runsignup.com and more information is available at www.salisburyrowanrunners.org

The last race held in Rowan was the Will Run for Food 5K that Robin mentioned. Four months, almost to the day we plan to get back after it. The first race in our extended area was held in York, S.C., last weekend and we’ve had lots of help from Road Runners of America to get going again. I hope to see many of our local runners in Faith for the 5K.