State says prisoners objected to being quarantined as part… 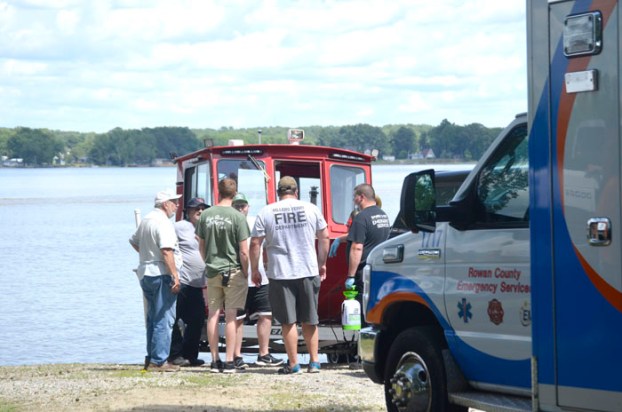 A man contracted to landscape a Rendleman Road home fell in the water at Swearing Creek after it was believed he had a seizure. He’d been in the water for about 45 minutes. Rescuers docked their boat at the Rowan Shriner’s Club and placed him into a waiting ambulance. Shavonne Potts/Salisbury Post

HIGH ROCK LAKE — A man died Monday after authorities said he fell into a cove on High Rock Lake after experiencing a possible seizure.

Miller’s Ferry Assistant Fire Chief Bobby Fox said the man, whose name was not immediately available, was doing landscaping at a home on Rendleman Road, located off of Long Ferry Road.

Fox said the man and his brother own a private landscaping company and were contracted to work at 375 Rendleman Road. Rescue personnel were dispatched to the area at 2:50 p.m., arrived at the scene at 2:56 pm and found him six minutes later about 15 feet from where he fell into the water. The man fell into about 3 feet of water, Fox said.

The victim’s brother was mowing the lawn. He found his brother’s shirt at the edge of the water. The trimmer was in the water. It’s believed the victim was in the water about 45 minutes before rescue personnel found him.

Miller’s Ferry Fire Department provided a boat so that rescuers could get to the victim. The boat docked at an access point at the Rowan Shrine Club.

The Rowan County Sheriff’s Office is investigating. No other details were immediately available.