‘Never in my wildest dreams’: Moore ready to take… 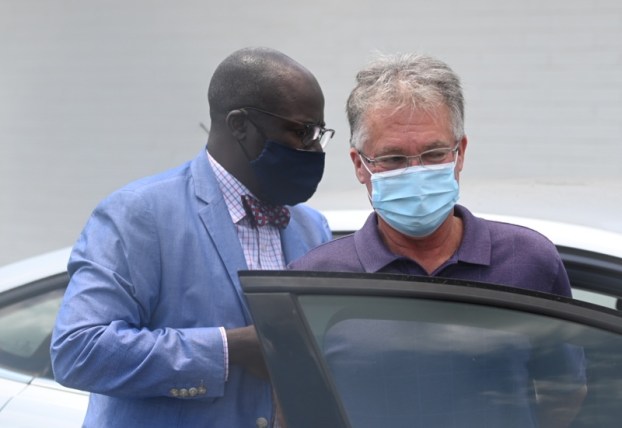 LANDIS — One after another, three former town staffers on Thursday were escorted into the Rowan County Magistrate’s Office to face a long list of charges levied against them.

A year and a half after questions were raised regarding the town of Landis’ finances, some answers came with the arrests of former Landis Town Manager Reed Linn, former finance officer Ginger Gibson and former recreation director Andrew Morgan. All three face charges of felony embezzlement. A grand jury returned a true bill of indictment on the trio one day earlier.

Linn, 61, of Stirewalt Road in China Grove, was arrested Thursday afternoon after turning himself in. Warrants were issued for his arrest for one count of felony conspiracy and 10 counts of felony embezzlement of public funds by a public officer/trustees. Six of the embezzlement counts are for an amount of greater than $100,000.

Linn did not respond when asked if he wanted to comment on the charges. Linn was issued a $250,000 secured bond, which he posted. He was released from the Rowan County Detention Center a short time later.

Gibson, 55, of Pagemont Road in Kannapolis, faces similar charges and was arrested Thursday after turning herself in. According to court records, Gibson faces two counts of felony conspiracy and 10 counts of felony embezzlement of funds by a public officer/trustees. Five of the embezzlement counts are for an amount of greater than $100,000.

Asked for comment before being taken to the county jail, Gibson said, “I haven’t done anything.”

Gibson was also issued a $250,000 secured bond and released from the county jail the same day.

Morgan, 35, of Basil Road in China Grove, faces one count of felony conspiracy and seven counts of felony embezzlement of funds by a public officer/trustees. Morgan was not previously named by officials for any alleged involvement. He was also arrested Thursday after turning himself in. Morgan was issued a $50,000 secured bond and released later the same evening.

All three were taken into the Rowan Magistrate’s Office for processing before being taken to the county jail. Gibson arrived first with her husband and escorted by two SBI agents. Gibson’s attorney arrived shortly after she was taken into the magistrate’s office.

A few hours later, Reed Linn, arrived by car and accompanied by two SBI agents. He was seated in the passenger side of the vehicle, driven into a gated entrance to the jail, processed and later seen leaving the county detention center.

The charges stem from an investigation sparked by questions raised by state officials in late 2018. A January 2019 article by the Post reported the Local Government Commission wrote to the town about its concerns about overspending in the 2017-2018 fiscal year and noted that several accounts were over budget. The LGC also mentioned a lack of communication between the agency and town staff.

The town board met on Feb. 4, 2019, in front of a standing-room-only crowd and announced that Linn would retire as the town manager but stay on as the fire chief. Linn, who was not in attendance at that meeting, wrote a letter saying that he was honored to have worked for the town. Read aloud during the meeting, the letter also addressed a January Salisbury Post article. Then-Mayor Mike Mahaley called the article “fake news.” The public’s questions about the town and/or Linn were “ludicrous,” Mahaley said.

Three days later, the State Bureau of Investigation opened a criminal probe into the town. Then-Alderman Seth Moore said he received a tip that he referred to Landis Police, who then passed the matter to District Attorney Brandy Cook. Cook asked the SBI to open an independent investigation. Instead of retiring, Linn resigned and Gibson also stepped down the same day the investigation was announced.

Salary records released by the town in March 2019 showed Linn and Gibson took home a salary considerably higher than the board approved over the course of a 10-year period. The higher salaries came at a time when the town board was forced to lay off several firemen and police officers as well as raise taxes and utility rates in order to balance their budget.

The civil lawsuit alleged then-Landis police officer Roger Hosey reviewed the payroll system and discovered “monies assigned in excess of $25,000 for the unauthorized payment of salary and contributions to the (retirement) plan on behalf of or to the benefit of Linn.”

According to the suit, Gibson presented employee compensation in a lump sum to the Landis aldermen, instead of itemizing by an employee, and it said Gibson’s and Linn’s compensations were inflated.

The investigation and subsequent resignations led to the appointment of then-Police Chief Kenny Isenhour as the interim town manager and Hosey as the interim finance officer. Hosey briefly served as town manager before an election brought new aldermen into office. The new group of aldermen fired Hosey from his town manager position, and he resigned from the police department.

The board of aldermen cited “just cause” as the reason for the firing, but Hosey’s contract says that phrase means a felony conviction or crime of moral turpitude. Hosey hasn’t been convicted or charged with any crimes and he is suing the town for wrongful termination.