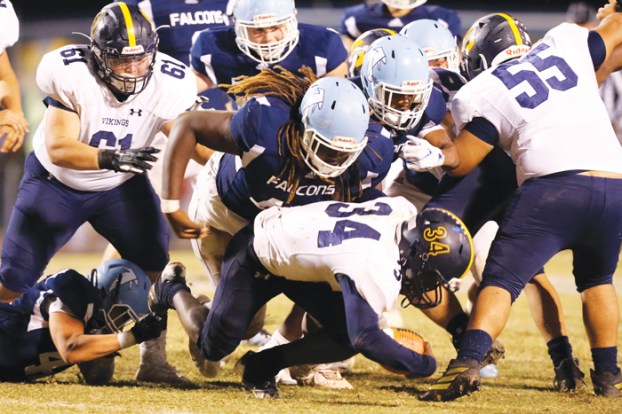 He delegated decision-making as far as high school sports to the N.C. High School Athletic Association.

The NCHSAA checked in almost immediately on Wednesday with calendar changes.

The start of high school fall sports — that includes volleyball, boys soccer, girls tennis, cross country and girls golf, as well as the flagship sport of football — is delayed at least until Sept. 1.

In addition, the first five days of August classes will be a “dead period” for athletics, so teaching staffs can focus on getting school started. That makes sense. The priority is supposed to be academics, then athletics.

All the schedules for 2020 — most schools had a couple of football games slated for August — are rendered obsolete.

Even if  “normal” football practice sessions can start on Sept. 1, teams would need a couple of weeks to prepare to play, and probably a scrimmage, before being ready to participate in games that actually counted. That would mean a late-September kickoff as the best-case scenario.

Yes, best case. Even that glum outlook might be optimistic.

Carson’s second-year coach Daniel Crosby said his Cougars, who were expected to be much improved from a 2-9 season in 2019, will keep plugging as hard as they can for as long as they can.

“I’m still confident that we’ll  have a football season, at some point,” Crosby said. “I don’t see how you can say we’ll play conference-only, though, because we’ve got conferences with different sizes. Maybe schools will play neighboring schools. Maybe everyone in Rowan County plays all the other Rowan schools, or something like that.”

What happens if the private schools are playing and the public schools aren’t? Will players whose parents have means transfer them? Crosby expressed hope that everyone in the state would stay “on the same page.”

“There are still so many unknowns right now,” said West Rowan’s rookie head coach Louis Kraft. “I mean, do we pick up the schedule wherever we can start the season or do we go ahead and reschedule everything? Our AD’s advice has been to wait and see because it’s going to keep on changing.”

Football workouts have included social distancing, many precautions, no contact and no pigskins. They have been permitted since June 15 in the Rowan-Salisbury schools, even though workouts were postponed or suspended indefinitely in numerous school systems.

“I really hope the workouts will continue,” Crosby said. “I think they are extremely important right now. Guys get to see each other and they get to work out together and bond together. That means a lot as far as the well-being of our players — and our coaches. It gives kids hope.”

“It’s just good to be together,” he said. “Mentally and emotionally, as well as physically, it’s good. And I honestly do think we’ll play at some point. I think not to play high school football would be absolutely devastating to the world of high school sports.”

Like Kraft, North Rowan’s Nygel Pearson is in his first season at the helm.

“We’ve got a hard date from the NCHSAA now — Sept. 1 — and that does help some as far as preparing,” Pearson said. “Since none of us have touched a football yet, we kind of knew this was coming. Realistically, we knew we weren’t going to be playing games in August.”

“We’ve gotten a lot done in group pods in our workouts,” Crosby said. “There are things you can control and things you can’t, and we just try to stay positive and focus on controllable stuff. We’ll keep pressing forward until that time comes when we can play football.”

Kraft said the Falcons have worked out Mondays through Thursdays, with practices limited to about an hour.

“We do position work in pods,” Kraft said. “We get in a lot of conditioning. We do agility, speed and mobility work.”

There are a lot of rules to follow and a lot of people checking up on the football squads to make sure workouts follow strict guidelines. It can be frustrating.

“I’m not against the travel teams, but some of them are functioning with no rules,” Kraft said.

On the positive side, Kraft said mammoth defensive lineman Zeek Biggers, a Georgia Tech commit, looks as imposing as ever.

“I’ve told Zeek that the goal is for him to be dominating from the first day he’s at Georgia Tech,” Kraft said. “He’s good enough to take over games. He just needs to bring it every single day.”

Kraft is also thrilled with the addition of defensive coordinator/strength and conditioning coach Keronte´Walker, a former D-I player at Missouri.

“He was a home run hire for us, and the kids already love him,” Kraft said. “He was at Charlotte Country Day, but he was just coaching there. We had a school position to offer him.”

Walker knows his stuff, but no one has a COVID-19 playbook. This is a whole new ballgame.

Pearson, offensive line coach at Catawba College last season, has used the weird start to his first season at North to his advantage.

“I’ve had to time to watch every one of last year’s games at least twice, so I know we’ve got to find a replacement for a really good running back (Malcolm Wilson) and two good linebackers,” Pearson said. “I learned who our kids are from film, learned their numbers and  body types. Our workouts have given me a chance to put faces with the numbers. I like what I’ve seen. I knew North had athletes who could run around, but these are also good kids who will work veyr hard. We’re not going too long in the workouts. The last thing we want to do is wear our kids out. It’s a long time until September.”

Crosby, Kraft and Pearson all noted that while July is half gone, with everything pushed back to Sept. 1, this is like a normal June.

Right now, all eyes are on Sept. 1. That date may bring a green light — or another delay, depending on how the COVID-19 numbers look..

“Let’s see what happens on September 1,” Pearson said.  Let’s see if we’re going to get ready to roll or push everything back to the spring — or whenever it’s safe to play. Safety for the kids, their families and their teachers has to be the first priority.”

Workouts continue. Players smile and sweat. Coaches do their best to encourage unity.

But it’s tough, and it might get tougher before it gets better.

“You think about it, and we haven’t had any high school sports now since March 13,” Kraft said. “I need a routine. I’m a guy that craves routine, and so do a lot of these kids.”