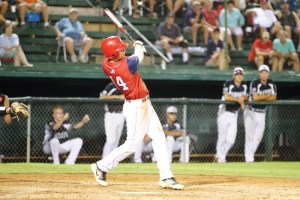 THOMASVILLE — High Point showed again on Tuesday that it’s the best team in NC3 baseball, but this time Rowan County put up a fight.

Pulverized 15-0 by High Point at Newman Park on July 5, Rowan led twice against the league champions in the rematch before falling 7-4 at Finch Field.

The difference was timely hits. High Point delivered three huge ones, including an inside-the-park homer by lead-off man Alex Rodriguez. He circled the bases when Rowan left fielder Jordan Goodine crashed into the wall pursuing his long drive and was injured.

Rowan also rapped into two critical double plays. High Point (16-3, 13-2) turned one in a damage-control first inning, as three Rowan hits produced only one run.  High Point turned an around-the-horn double play in the fifth when a monster inning loomed for Rowan. That inning had started with a walk and two base hits.

High Point didn’t help Rowan much at all, playing errorless ball in the field and yielding only one walk. Rowan has many patient, selective hitters. They usually pile up free passes.

Charlie Klingler opened the game by swatting the first of his three hits, but he was erased when Cole Hales grounded into a double play. Mize doubled and Goodine singled him home for a 1-0 Rowan lead.

Rowan lefty Casey Gouge had High Point popping up pitches on his first trip through the lineup, so Rowan was able to maintain that slim 1-0 lead going into the fourth.

Dylan Driver doubled to start the Rowan fourth. Logan Rogers’ groundout to the right side moved Driver to third. A balk permitted Driver to trot home for a 2-0 lead.

High Point had its first positive results against Gouge in the home fourth when CJ Johnson, who has been incredibly hot, lined a two-run homer to right to tie the game.

Rowan answered in the fifth with two runs. Zeb Burns walked and Klingler singled to start the inning. Burns scored on a wild pitch before Hales singled in Klingler for a 4-2 lead. Mize, the man Rowan wanted at the plate, was next, but that’s when High Point turned a game-changing 5-4-3.

That DP was the turning point and 4-2 would be Rowan’s last lead. In the bottom of the fifth, Gouge got ahead of the first two hitters and made pitches that produced groundouts. No. 9 hitter Alston Stevens got an infield hit to keep the inning alive. Rodriguez was next, and his liner to deep left turned into an inside-the-park homer. That evened things at 4-all, and Rowan suffered a major loss when cleanup hitter Goodine, who managed to walk off the field with assistance, had to leave the game.

High Point’s sixth started single-double-triple, and it was 6-4, in a hurry. Gavin Mortenson, a tall shortstop headed to Western Carolina, smashed the two-run triple — Rowan center fielder CP Pyle nearly caught it — that proved to be the game’s decisive blow.

Colby Roy, High Point’s starting pitcher, earned the win, The 6-3 right-hander retired Klingler and Hales with a man on base to keep Rowan scoreless in the seventh. That was his final inning on the bump. He was replaced by Luke Barrow, the Coastal Carolina-bound hurler who had dominated Rowan batters in the teams’ first meeting.

Rogers relieved Gouge and got two outs while walking the bases full in the seventh. Bryson Wagner came in and got a groundout to get Rowan out of that seventh-inning jam.

Mize opened the Rowan eighth with his second double. Mattox Henderson got Mize to third with a bunt, but Barrow struck out Driver and Rogers.

Wagner walked the first two batters he faced in the eighth before Drake Carrick singled home an insurance run for High Point.

Barrow struck out the first two Rowan hitters in the ninth. Burns briefly kept Rowan’s hopes alive with an infield hit, but Klingler lined out to left on a 3-and-2 pitch to end it.

Rowan will wrap up the season on Friday when it entertains Concord at Newman Park. The Class of 2020 players — that’s Mize, Rogers, Burns, Klingler, Goodine, Ryan Street, Jonathan Spry and Daniel Sell — will be honored.