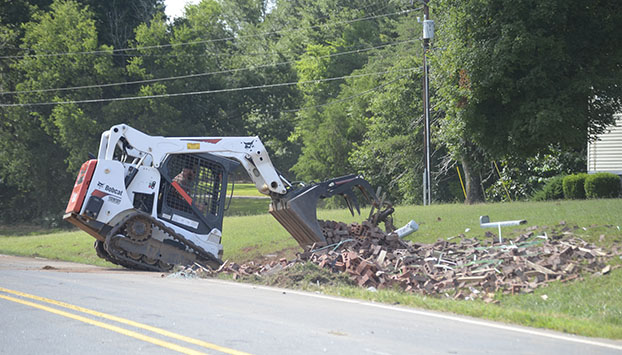 A worker cleans up remains of a wreck on Stokes Ferry Road that dropped a load of bricks and closed the road for several hours.

SALISBURY — A driver hauling bricks for Morrison Bros. Building Center received minor injuries when he lost control of the truck and scattered bricks across the roadway in a single-vehicle Stokes Ferry Road crash.

The driver, whose name was not immediately available, was able to get out of the cab of the truck, which was destroyed. The bricks spilled onto the roadway and roadside just in front of a home at 7830 Stokes Ferry Road and Larin Way, a private road.

West Liberty Fire Chief Darrin Trexler said the driver had already gotten out of the vehicle when crews arrived. Rescue personnel were dispatched to the scene at 1:24 p.m. It took hours to right the truck and load the bricks onto trucks to be hauled away.