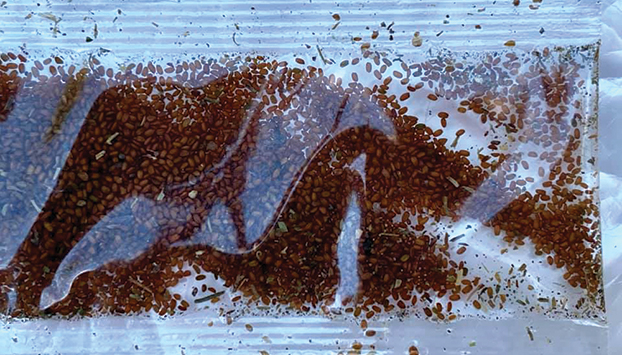 Photo submitted - These are the seeds Brittany Thompson said she recently recently in the mail without ordering them.

SALISBURY — Brittany Thompson enjoys gardening, but she has never purchased any seeds online.

That’s why she was surprised and a little frightened when a packet of seeds appeared in the mailbox at her Mount Ulla home with an origin address in Uzbekistan.

The seeds are small and reddish brown. They came in a rectangular plastic package with no instructions or other items inside the envelope. Thompson had seen stories about people receiving mysterious seeds in the mail. She was now one of them.

“It’s kind of scary to just get the seeds, and I don’t know what they are,” she said.

Shortly after receiving them, Thompson talked to staff at the Rowan County Extension Office. She has since contacted the N.C. Department of Agriculture about picking up the seeds. Importantly, she didn’t plant them — something state agriculture officials are urging people to avoid in case the seeds are from an invasive species.

People who send an email to newpest@ncagr.gov should include the following information:

After reporting the seeds, people should place them in a Ziploc bag. 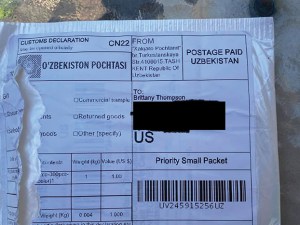 Photo submitted – This package was received by Brittany Thompson, of Mount Ulla. Inside were seeds that she did not order. Her address and phone number have been blacked out.

Wilson said the mystery seeds had been reported in 58 North Carolina counties at last count. Albertson and Wilson both said the seeds have been of different shapes and colors. Albertson said some seeds look like lettuce or pumpkin seeds while others appear to be circular beads. Wilson has seen some that appear to be flower seeds and others that look like vegetable seeds.

Right now, Wilson said, the N.C. Department of Agriculture is trying to collect data on the mystery seeds, which are still showing up in mailboxes.

It’s a new phenomenon for both Wilson and Albertson.

The N.C. Department of Agriculture believes the motive for the seed-mailing phenomenon is an international scam known as “brushing.”

“According to the Better Business Bureau, foreign, third-party sellers use your address and Amazon information to generate a fake sale and positive review to boost their product ratings,” Wilson said in a news release.  “Seeds are just one of the items used in this scam, however, you could receive other inexpensive items such as rubber bands, plastic toys or empty bags.”

Thompson said she’s personally worried about how the unknown shipper obtained her address, particularly if it was just from her Amazon purchases.

The U.S. Department of Agriculture advises people to hold onto all parts of the package, including the mailing label, until items are collected by the state’s department of agriculture. Albertson said local residents who receive seeds are not in any legal trouble, but they are key to identifying and stopping any future shipments. Similar to the state department, the USDA says it doesn’t have any evidence to indicate it’s anything other than a “brushing” scam.