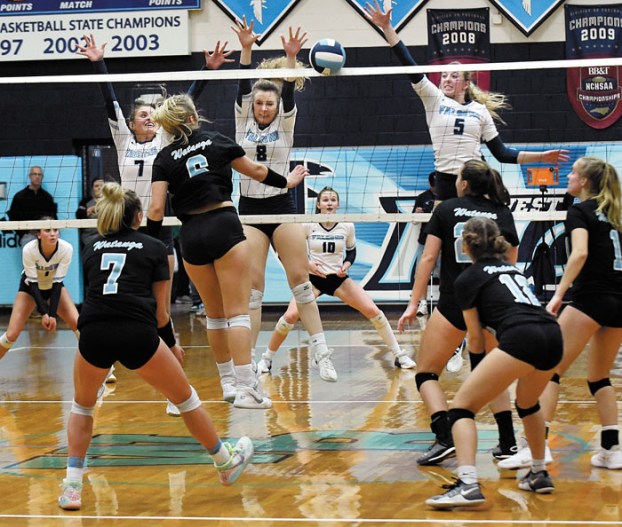 Salisbury Post File Photo -West Rowan’s front line of Emma Gaeta (7), Carly Stiller (8) and KK Dowling (5) are ready for the block, but Watauga’s Rebekah Farthing’s attack hits the net, during a 2019 3A volleyball match in Mount Ulla. The Falcons won, 3-1, and moved on to the West Regional final.

SALISBURY — As of Tuesday, there’s a plan for NCHSAA playoffs for the 2020-21 school year.

Actually, it will look a lot like the old days, with the bloated playoff fields of recent years sliced in half and with predetermined playoff brackets, rather than brackets hinging on rankings. In other words, the No. 2 team from this league will play the No. 1 team from that league in the first round. That’s how it was for a long time. Then things got more sophisticated and more complicated.

It’s possible that, with predetermined brackets, two of the best five teams in the state might meet in the first round of the playoffs. But fans and parents just want games, while coaches and players just want to get on the field.

Playoff brackets that normally included 64 teams will now have 32. Football will have two 16-team brackets in each classification.

Rowan County and North Carolina are looking at four playoff weeks of football and just two weeks of playoffs in the other sports.

Football playoffs are scheduled for April 16 through May 8.

Boys and girls basketball playoffs will be from Feb. 23 through March 6.

Volleyball playoffs are Jan. 12 through Jan. 23, when there obviously will be some weather risks.

Boys soccer playoffs are from March 16-27.

Girls soccer playoffs and softball playoffs are May 3-15.

It will actually be nice to once again know exactly what a team needs to do to make sure it’s in the playoffs.

For instance, only one of those volleyball powerhouses in the six-team North Piedmont Conference is guaranteed a playoff spot. Usually, five of them make the playoff field.

Boys and girls golf regionals are set May 3-4 with state championships on May 10-11.

Wrestling regionals are June 18-19, with state championships on June 26.

The announced playoff schedule definitely will mean some sports overlap. Potential problems, yes. The basketball playoffs will conflict with the first two weeks of football season.

There can be 50 outdoor participants now for those voluntary workouts, up from 25. Indoors, the number of participants allowed moves up to 25.

Volleyball and cross country are scheduled to be the first sports seasons to take place this school year, with the first practice Nov. 4 and the first contest on Nov. 16.

The first official day of football practice is a long way off — Feb. 8.