Editorial: County commissioners take on project that could become… 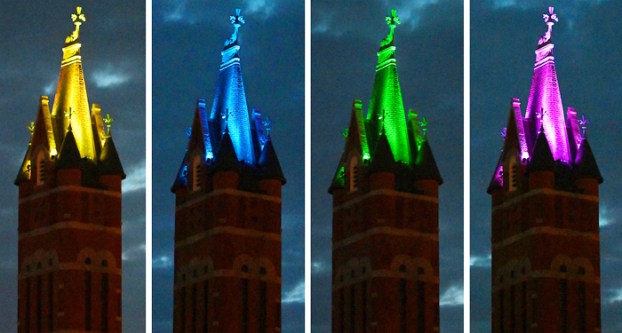 Andy Mooney / Salisbury Post LIghts were recently installed in the Bell Tower that have the ability to show a variety of hues.

Developers of downtown’s Bell Tower Green Park have added lights to the structure as a means to celebrate special occasions. And believe it or not, the addition is viewed as divisive by some.

As one might expect, seeing the lights in action that prompted a range of emotions. Bell Tower Green flipped on the lights earlier this month, and photos of the lights in action appeared with a story published on 1A Sunday (“A brighter Bell Tower could be used the commemorate special events, show solidarity”). For some, it’s tacky, ruins downtown’s historic character and is a waste of money. It’s a welcomed addition for another group. We suspect most people will fall somewhere between those two.

When the Historic Preservation Commission in May 2019 OK’d the lighting, it had reasonable explanations to accompany their support. It’s worth reflecting on those now.

“I think it would be odd to have the tower itself lit and then fizzle out to not being able to see the spires at the top,” said HPC member Steve Cobb. “This kind of finishes the job.”

Member Acey Worthy said the lighting would accent the architectural structure of the building.

“I think the Bell Tower and the Bell Tower Green are going to be great for the community, and I see nothing in the lighting proposed today that adversely affects any around us,” John Schaffer said.

Editorials that we write weigh in on controversial and divisive issues from time to time, but this is not one of them, particularly if the lights are a limited occurrence and as long as lights aren’t rapidly flashing like a disco between different colors. For those who dislike the lights, consider that roughly $12 million in private donations is turning a city block previously dedicated mostly to parking into a beautiful central park.

They’ll add a nice accent to events like Pops at the Post, the Cheerwine Festival and other major happenings downtown. How about a nice evening walk in the park at Christmastime with a lit Bell Tower in the background? It’s not hard to imagine a scenario where a pop of color could make things more enjoyable.

Salisbury can simultaneously embrace its history of preservation while finding new ways to display it. Colored lights are a welcome addition to the Bell Tower and should be put to use on a limited basis when the park finally opens, currently projected to be early 2021.