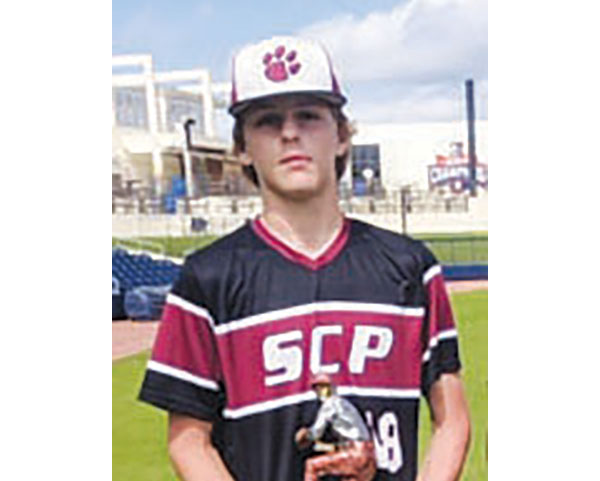 SALISBURY — It’s almost as hard to catch up with extra-busy Cameron Padgett as it is to get a hit against him.

Padgett, who just started his junior year at East Rowan, squeezed in a verbal commitment to the University of North Carolina’s baseball program last week between work and workouts.

He’s humble about it. He likes to think of himself as a “kid with a dream” and the underdog because he’s never been that guy who lit up the radar guns, but he’s been considered an outstanding pitching prospect for more than two years.

He’s been a certain Division I signee for a while. Only his precise destination was up in the air.

“I just wanted to play ball my freshman and sophomore years, and not stress about recruiting,” Padgett said. “But my junior year is here already, and it was time to make a decision. I’ve grown up a UNC fan, going to the football games and the basketball games. UNC is a school that’s always been at the top of my list. I was thankful for the opportunity when they offered. I called the UNC coaching staff last week, and they were ecstatic.”

His school days are spent not only with classroom and online academic pursuits, but with football workouts, basketball workouts and baseball workouts.

Padgett, who is right-handed and almost 6-foot-4, is an old-school type who likes to play all three sports. He’s been on East’s varsity basketball since his freshman year. He could be East’s quarterback this winter when football finally gets here. But baseball is definitely where he shines brightest.

As a pitcher with precision and guile beyond his years, he burst on the scene in a national context in the summer of 2018, between eighth and ninth grade, as a member of the South Charlotte Panthers showcase team.

“The Panthers provided great coaching and exposure,” Padgett said. “Just being on the roster of the South Charlotte Panthers opens doors for you and gets college coaches interested in you. Playing for the Panthers, I got scouted and I also had a chance to compete against some of the best players in the South. It can be humbling, when you see how talented some of those kids from Florida and Georgia are, but it always was a great experience.”

The South Charlotte Panthers organization added the youngest group it had ever worked with to its lineup in 2018. Those were athletes in the class of 2022, including Padgett and South Rowan infielder Nathan Chrismon.

That squad won the Perfect Game Freshman World Championships. Padgett was one of the keys to that triumph with three dominant outings in the tourney and received the MVP award for pitchers.

In the championship game, Padgett struck out eight, with no walks, and completely silenced some of the nation’s most promising young hitters.

“I was only throwing about 80 or 81 then, but I’d grown up learning how to pitch and not just throw,” Padgett said. “A lot of guys that age, when they’re facing elite hitters like that, they try to throw harder and they’ll over-throw. But I had full confidence in three pitches. I commanded three pitches and could throw them for a strike in any count. So I could just be myself on the mound. I think that’s what separated me from most pitchers.”

Phone calls started coming in to Padgett’s coaches after that electrifying showing. He got Clemson’s attention. He got Virginia’s. He got almost everyone’s.

Padgett was downright skinny in the summer of 2018, with 155 pounds stretched over a 6-foot-2 frame, but it was easy to project that his smooth delivery would produce more velocity as he added weight and muscle.

And that’s what has happened.

Now he’s added almost two inches and he’s up to 183 pounds. He was pitching at 88 to 90 mph this summer, with plenty of room still to grow. He has broad shoulders.

“I’ve gotten older, bigger, stronger,” Padgett said. “Now I do have pretty good velocity, but it’s a huge advantage for me that I learned to pitch without it.”

Padgett is a thinking man’s hurler. He’ll throw the strike-one breaking ball to the No. 3 hitter, but he’ll go right after those guys at the bottom of the lineup with the hard stuff.

While Padgett’s potential is sky-high, he has barely had a high school career to this point.

As a varsity freshman for the Mustangs, he was 1-1 with a 1.91 ERA before an injury ended his season.

As a sophomore, he was 1-0 in three appearances with 15 strikeouts — and zero walks. COVID-19 shut things down after East had played six games.

That was unfortunate on many levels. East had a legitimate chance to win the 3A state title in 2020, with an offense powered by Charlie Klingler and Wayne Mize and a pitching staff led by Padgett, ECU commit Jake Hunter, N.C. State commit Chance Mako and J.D. Basinger. Basinger doesn’t have the height that Hunter, Padgett and Mako are blessed with, but he has an unhittable breaking ball and is another college prospect. Basinger would be the ace for just about any other team.

“We had a great team, with a lot of offense as well as that strong pitching staff,” Padgett said. “We’ll still be very good when we get the chance to play again, we’ll still have a shot with our pitching, but we lost a lot of offense.”

Part of East’s offense in 2021 will be Padgett, who is a good enough athlete to play shortstop or third base when he doesn’t pitch. He’ll probably be East’s shortstop as a junior and senior.

“He’s got all the tangibles,” East head coach Brett Hatley said. “As a pitcher, he paints it, he spots it up pretty good with three different pitches. But he’s also got the intangibles. He’s a bulldog on the mound, a tremendous competitor. When you hand him the ball, you know you’ve got a great chance to win and you also know he’s not going to want to come out of the game.”

Padgett admits that he’s one of those guys who hates losing even more than he enjoys winning.

“I can’t stand to lose,” Padgett said. “If my team loses, I’ll take 100 percent of the blame because there was something I could’ve done better.”

It’s going to be a hectic school year for Padgett. Basketball is scheduled for January and February. That will melt right into football season in February, March and April. Baseball is set to start in late April and could extend into late June if the Mustangs make a run.

He’s a good student who hasn’t made up his mind about his major at UNC, but he’s still got quite a bit of time to think about that.

Law school is something he’s contemplating, but he obviously has baseball dreams and wants to see how far his right arm can take him.

“He’s committed to a great school and UNC is also a great place to play baseball,” Hatley said. “We had a chance to see (recent draft pick) Ike Freeman play for UNC, and now we’ll be sending another Mustang there.”