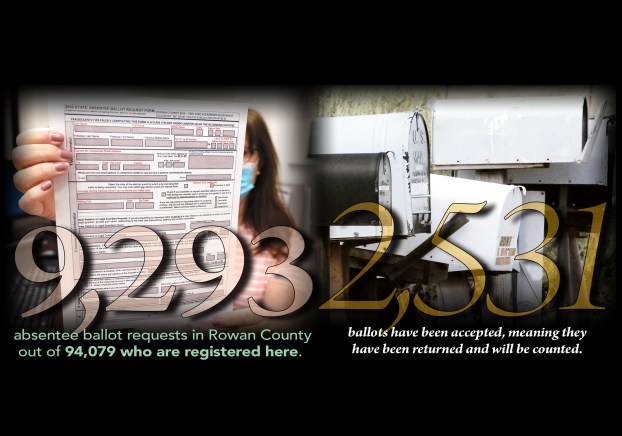 Thousands of Rowan County voters have requested an absentee by mail ballot and a portion have already cast their vote in November’s election.

Data from the N.C. State Board of Elections on Thursday showed 9,293 of the more than 94,000 people registered to vote in Rowan County have requested an absentee by mail ballot. A total of 2,531 people have already returned their ballot and had it accepted, meaning that they have already voted in November’s election.

About 6,600 absentee by mail ballots haven’t yet been returned to the Rowan County Board of Elections, according to state data.

There are 145 ballots that require a cure or a correction, according to the N.C. State Board of Elections. If a voter did not complete all required fields on his or her ballot, he or she can make corrections to ensure votes will be counted. Errors could include something like an empty signature field or a signature in the wrong place.

One person has fixed an error on his or her ballot and had their ballot accepted.

On Thursday, the partisan breakdown of ballots returned and accepted in Rowan County was as follows:

Due in large part to coronavirus concerns, the number of ballot requests this year has far outpaced prior years, including the presidential election in 2016. In North Carolina, voters are able to request an absentee by mail ballot without an excuse such as traveling at the time of the election.

The number of early voting hours has also been significantly expanded in Rowan County. Early voting begins Oct. 15 and will be every day until Oct. 31, including Saturdays and Sundays.

Statewide on Thursday, more than 1 million people had requested an absentee ballot and 203,013 had returned their ballot. Absentee by mail ballots can be requested until 5 p.m. on Oct. 27.

For more information about voting by mail, visit ncsbe.gov/voting/vote-mail. Rowan County voters can also contact the local Board of Elections at 704-216-8140 or visit its website at rowancountync.gov/Elections.