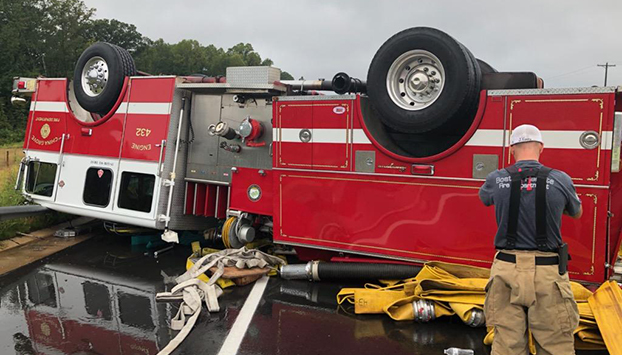 Photo submitted - A Bostian Heights firefighter works at the scene of an overturned fire engine on N.C. 152.

CHINA GROVE — Three China Grove firefighters were injured Friday morning after the firetruck they were riding in overturned while responding to an emergency call.

The firefighters — George Stewart, Cameron Harwell and Adam Wingler — were all taken to the hospital with minor injuries, said Town Manager Ken Deal. He said at least one of the firefighters was taken to Atrium Health Cabarrus and another to Novant Health Rowan Medical Center.

It’s not clear if the weather played a part in the crash. However, the rain led to other accidents in Rowan County around the same time. Firefighters were thought to be responding to one of those accidents when the fire engine crashed and overturned.

A crash was reported nearby, at mile marker 65 and Old Beatty Ford Road, just before the firetruck overturned. Both China Grove and Bostian Heights fire departments were dispatched to that crash.

Trooper K.G. Barringer, of the N.C. State Highway Patrol, said the driver of the engine lost control of the truck and it overturned, but it’s not clear if the wet road conditions led to the crash. Firefighters were wearing seatbelts and able to get themselves out of the firetruck, Barringer said.

The crash is still under investigation, he said.

It took hours for the truck to be righted and towed from the scene.