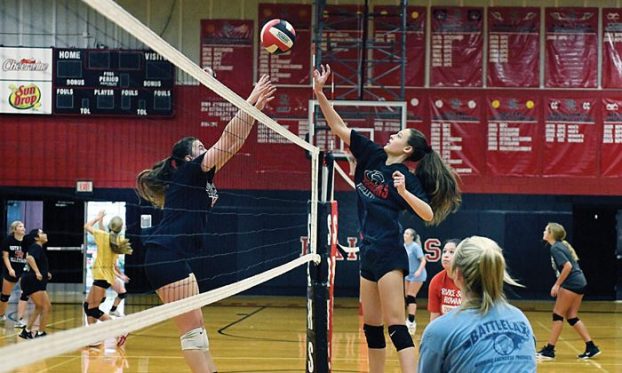 Interest is spiking in South volleyball

LANDIS — Normally an August to October grind, the condensed 2020 volleyball season basically will be played with halls and gyms decked with holly.

The regular season is scheduled for what is normally a festive, holiday-heavy time — Nov. 16 to Jan. 8.

“And it looks like we’re going to be starting our season the second week, not the first week,” South Rowan coach Jenna Horne said. “This season definitely is going to have a different feel. Playing Thanksgiving week, playing during Christmas, playing right before New Year’s.”

One of South’s most anticipated matches — Carson — tentatively has been scheduled for Dec. 30. That’s a date when the basketball Christmas tournament championship at Catawba College might be decided in a normal school year.

But in this year of COVID-19, everyone said goodbye to normal months ago. There won’t be any NCHSAA basketball games played before Jan. 4.

South competes in the 10-team 2A Central Carolina Conference. With a 14-game volleyball season mandated by the NCHSAA, that’s obviously caused a scheduling shakeup.

Schools normally play 18 CCC volleyball contests, a home-and-home marathon, but South will be playing each of its league foes just once this time.

The exception to that rule will be Ledford. South will scrap with the Panthers, one of the league’s stronger programs, in a designated non-conference match, as well as the standard league matchup.

In addition to Carson, South also plans to play East Rowan in a non-conference match.

The other two will come in the CCC tournament. AD Angie Chrismon is putting the finishing touches on the schedule.

“Not that they don’t always earn their money, but all the ADs are working overtime trying to get schedules worked out for us,” Horne said. “I don’t think anyone will complain much about who they play or when they play. We’re just glad we’re able to have a season. We feel lucky to have a season.”

South’s season is likely to include another trip to the state playoffs.

South volleyball is drawing more attention than usual not just because volleyball will be at the forefront of the return of NCHSAA sports, but because the Raiders are coming off an epic season, the finest in school history. The Raiders were 28-2 in 2019, dominated the CCC for 18 consecutive wins, won the league’s postseason tournament, and then prevailed in three playoff games. The only losses were to West Rowan, a Final Four team in 3A, and to eventual 2A state champion Fred T. Foard in the fourth round of the playoffs.

One of  South’s 28 victories was a significant breakthrough against neighbor Carson, a perennially stout program. That September victory in Carson’s gym gave South volleyball momentum and credibility. At the end of the season, MaxPreps rated South as one of the state’s top 40 programs (all classifications) and as one of the top five in 2A.

For a school fighting for respect and a handful of wins in some major sports, the volleyball team’s overwhelming success was a rallying point for students and community. A 25-game winning streak between the two setbacks gave everyone plenty to cheer about.

“We know the rest of the CCC will be gunning for us this season,” Horne said. “Everyone knows we lost a very big player in Kira Rimer, but we have key returners back and I don’t think everyone realizes how strong our new players are going to be. Last year, people didn’t know if we could be as good as we were in 2018 because we’d lost Janiya Downs, but we had another great season.”

Kira Rymer was CCC Player of the Year and co-player of the year for Rowan County for 2019, so those are big shoes to fill. South graduated three more seniors from a slim, nine-person varsity roster, including all-county outside hitter Ashlyn Faw.

The 2020-21 Raiders will have senior Anna Rymer, Kira’s first cousin, as their fulcrum. She was all-county and all-conference and was recognized as all-region by High School Overtime.

“She’s a very dedicated and driven player, one of those girls who is going to go play some more volleyball after we finish a workout,” Horne said. “We’ve used her a lot as a setter, but the plan is for her to hit more this year. She’s a really strong hitter.”

The Black sisters, Payton and Cameron, return. Payton, now a junior, was an all-county libero in 2019, while Cameron, now a sophomore, displayed an impressive all-round game as a freshman starter.

“They were good players last year, but I can see a huge difference in them now from all the work they’ve done,” Horne said. “Cameron is swinging faster, hitting harder and more consistently.”

South also will count on the “Kendalls.” Seniors Kendall Walter and Kendall Rockstad have been helpful in the past, but now they’ll be asked to take on bigger roles.

“People usually talk about both of them together, and I guess I do too,” Horne said. “They’re tall. They’re good blockers.”

Freshmen to watch will include Leah Rymer, Anna’s younger sister, and Avery Welch.

“Those are two to keep an eye on,” Horne said. “They have big futures.”

South had been working out twice a week, but it ramped up workouts to four days this week.

The Raiders are working out every day except Wednesday this week. Wednesday is the day with no physical classes and is the day set aside for sanitizing, cleaning and disinfecting.

“We do a lot of conditioning, not just running, but volleyball-related conditioning, like jumping,” Horne said. “We can share a ball, so we’ve also been able to do volleyball things — drills and skill work.  About the only thing we can’t  do is scrimmage 6-on-6. You can’t scrimmage 6-on-6 and still maintain 6 feet of social distancing.”

The official start of volleyball practice comes on Nov. 4.

As far as whether or not fans will be able to attend matches, that is still to be determined.