Editorial: 2020 could be year without complete candidate forum 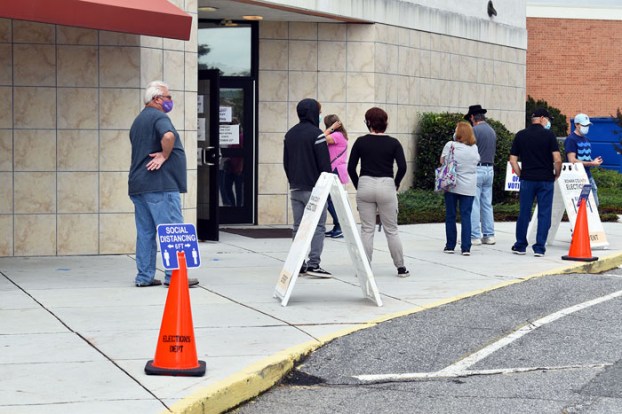 Natalie Anderson / Salisbury Post — Rowan County voters turned out in droves during the first day of Early Voting on Thursday, Oct. 15, at the West End Plaza. Voters have 16 additional days to cast an early vote before the General Election on Nov. 3.

Get ready for some more records.

When the first day of early voting closed Thursday, 9,694 Rowan County voters had cast their ballots in person or absentee as compared to just 2,205 ballots cast by the same day in 2016.

But when voting closed on Saturday, the same number had topped 15,000. Turnout has reached nearly 16%, and there are still 15 days of early voting and plenty of time for absentee by mail ballots.

Catawba College politics professor Michael Bitzer said it’s possible that 70% or, as the State Board of Elections suspects, 80% of voters could cast their ballots before Nov. 3.

Because of the enthusiasm shown in the first three days of early voting, with long lines already stretching around parts of West End Plaza, it’s worth wondering whether turnout records are within reach, too.

Recent presidential election turnouts, according to the Rowan County Board of Elections, are as follows:

Elections Director Brenda McCubbins says she thinks that turnout percentage in 2020 will top 2016 because of absentee by mail and early voting. It will be difficult to top turnout percentages from the early 1980s, but there are more registered voters now — 96,768 — than ever before. So, it’s possible to set a record for total ballots cast.

Bitzer says a record for total votes cast is possible statewide for the same reason.

“With the numerical increase in the registered voter pool over the past four years, and the fact that we should see the same turnout based on past presidential elections from that pool … that would automatically increase the number of prospective ballots from the 7.2 million registered voters,” Bitzer said. “My estimation is at least 5 million ballots cast, but I could see more than that as well.”

Helping propel efforts toward record turnouts will be Rowan County’s significantly expanded number of hours for early voting this year and a vote by the N.C. Board of Elections to choose the most generous option proposed on the local level.

During the first week of voting in 2016, there was only one early voting site in Rowan County. This year, all five sites are open during the entirety of early voting.

Voters can visit any one of the five sites to cast their ballot as long as they are registered in Rowan County.

Today also marks the first time there will be early voting on Sunday, which makes it much easier for churches to ensure their congregations cast ballots and provides ample opportunity to vote for people who might otherwise have to work on weekdays and Saturdays.

As of Saturday evening, here’s how early voting is shaping up at each of Rowan County’s five voting sites: