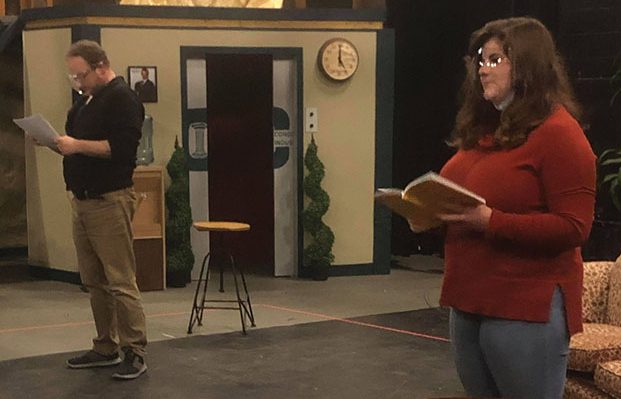 SALISBURY — Rod Oden said that it was almost like watching a scene from E.T. as he observed the crew from PuroClean systematically sanitize every nook and cranny of Lee Street theatre on Friday, Oct. 9.

“They come in and get in their suits and have their professional masks with cartridges,” Oden, Lee Street theatre’s executive director, said. “They’re talking to each other like it’s a crime scene.”

The PuroClean crew was there to sanitize the theatre days after it was shut down due to several members of the “9 to 5: The Musical” cast testing positive for COVID-19. The positive tests came days before the production was set to open for live performances, which would have been the first in-person showings at the theatre since the Coronavirus pandemic began.

Instead, production was halted and the theater’s doors were closed until the PuroClean team swept the building, scrubbing touch surfaces and spraying disinfectant.

On Sunday, practices resumed for “Fun Home,” a play that was being rehearsed at the theater during the same time as “9 to 5: The Musical.” Now, with “9 to 5: The Musical” set to be released online only, “Fun Home” is slated to be the first live performance back and will open on Friday, Nov. 13.

Oden, the director of “Fun Home,” said that the theater is “dead set” and “determined” for the show to go on as planned.

“I do believe that theatre has the power to change and heal personally,” Oden said. “I think in a time when we are all isolated and feeling boxed in, maybe our lives are feeling secluded and we’re not getting fed mentally to keep emotionally going on. It’s important that we provide avenues for people to get together safely to express their feelings and express how they’re dealing with these issues.”

Having PuroClean cleanse the facilities was one measure Oden and the staff at Lee Street have taken to keep cast and crew members healthy and prevent the virus from shutting down another production. 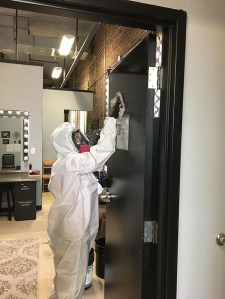 A member of PuroClean’s cleaning crew scrubs down a door at Lee Street Theatre. After several members of “9 to 5: The Musical” tested positive for COVID-19, the theatre brought in the crew to sanitize the building. Photo submitted.

“The big changes that we added include moving from ‘Fun Home’ forward, we are going to be face shielding actors so that they will have a barrier between them and the audience, as well as the audience members already required to be masked,” Oden said.

Oden jokingly said that the face shields actors now wear gives off the impression that they’re putting on “space theatre.” While they may look unusual, Oden said that he is confident they do their job.

“This actually fits on the actors face and allows them the ability to breath, but it also creates a strong plastic barrier,” Oden said. “Any aerosols, any spittle, anything like that coming from the actor’s performance is caught there in the face shield and they’ll be able to clean that when going off stage.” 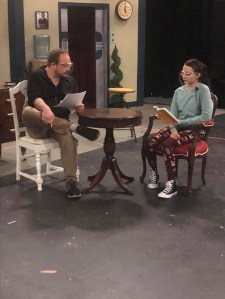 Tommy Foster, who plays the lead role of Bruce Bechdel in “Fun Home,” said that the face shields are “less-intrusive” than some of the other face coverings he’s seen and used. Foster said that he is glad that Lee Street theatre decided to move forward with “Fun Home,” even after “9 to 5: The Musical” was canceled.

“Hesitantly I stepped back into the theater, but I think we all have to take some steps back toward normalcy,” Foster said. “We have to keep testing the waters.”

Oden said there was little hesitation on the theatre’s part to continue with “Fun Home.” However, a cast member of the play did decide that they did not feel comfortable with the plan to resume. Lee Street and the actor have since parted ways for this performance and the role has been recast. Oden said that he was “supportive” of the actor’s decision and Foster said that the decision by the actor was “understandable.”

Foster said that the steps Lee Street theatre took, including the PuroClean sanitation and the implementation of masks and other new safety measures, was enough to convince him to continue with Fun Home.

“So many theaters and businesses are closing,” Foster said. “Somebody has been willing to put forth the money to continue this and that makes me all the more willing to do that, to take the journey with them.”

Unlike “9 to 5: The Musical,” “Fun Home” is a small production, featuring only about eight cast members.

Oden said that the cast members of “9 to 5: The Musical” who tested positive for COVID-19 are “on the mend” and that the only symptom that persists is lingering fatigue.

For more information about Lee Street Theatre and the COVID-19 safety measures Oden and his staff have put in place, visit leestreet.org.