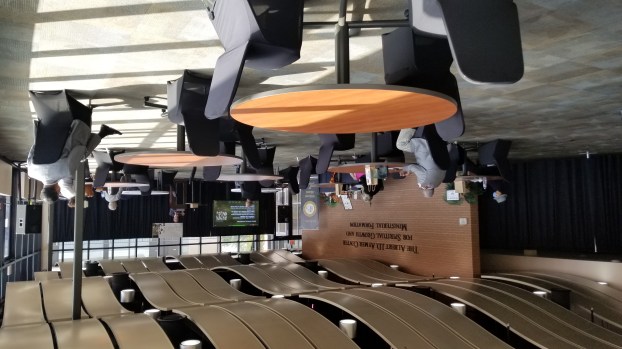 SALISBURY – Returning for a second year with some pandemic-induced changes, Hood Theological Seminary on Friday took on the intersection of faith and science.

The International Center for Faith, Science and History hosted the annual conference in the seminary’s Aymer Center. The event drew a handful of in-person attendees spaced throughout the conference area, but most tuned in online. The seminary live streamed the entire event, which initially was established with a grant from the Science for Seminaries initiative of the Association of Theological Seminaries.

Salisbury Mayor Karen Alexander introduced the event, and the keynote speaker was former Gov. James Martin. Martin was Governor from 1985 to 1993. He was the last Republican governor to serve to two full terms.

Martin spent his career as a chemist and educator. He’s the son of a Presbyterian minister. He’s also an author, having written the book “Revelation Through Science.” Martin described life as so complex it could have come from “unguided chance.”

Martin described the small selection of amino acids which form the proteins that serve as the basis for all life on the planet. While Martin said he believes the Bible is the word of God, it is not a science textbook.

“Science reveals God’s processes of evolution and his timeframe of creation,” Martin said, adding it should never be an impediment to faith.

Martin said science can tell people a lot about nature and, in that way, reveal, not who God is, but that God is.

Martin described the persecution of Galileo, who defied the belief the Earth is the center of the solar system and was placed under house arrest for the rest of his life despite the fact the fact the other planets in the solar system orbit the Sun. He also described Charles Darwin’s theory about the process of evolution and species descending from a common ancestor through to the description by James Watson and Francis Crick of the double helix structure of DNA.

Martin described the specific way DNA and RNA connect and how they all have a right-hand thread pattern that’s synthesized from a combination of “left handed” amino acids and “right handed” ribose and deoxy-ribose.

Martin said all of the components needed to be present in the first living thing.

“We find realities of nature that point us to God,” Martin said.

Campbell described Martin’s work as working out the claim that you can see God through nature. For his part, Campbell described science and religion being viewed as at odds by historians until the 1930s, when sociologist Robert Merton’s thesis challenged the concept.

The other half of the program was dedicated a webinar by Goldman Environmental Prize recipient and ethnobotanist Nat Quansah, who presented about an integrated health care system approach. He described growing up in Ghana and seeing traditional and contemporary medicine being employed together.

He described his own study of plants and how they are used by humans in a number of ways, including health. Quansah described the use of plants in health care as manifesting in traditional medicine.

Quansah said traditional medicine occurs naturally in a place and is part of that culture. He said, by that definition, he infers allopathic, or modern medicine, is traditional as well.