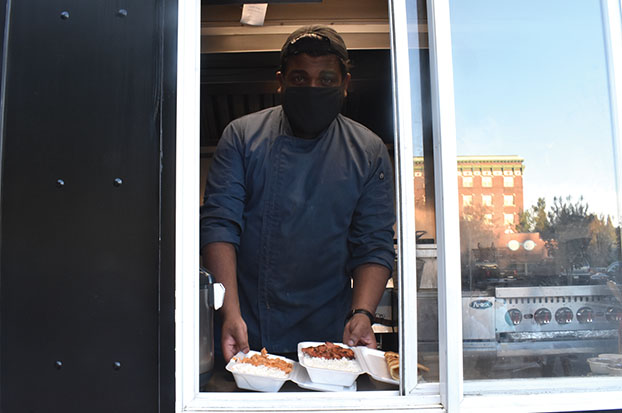 SALISBURY — Greg Shields did not miss the traffic that came with living near the sprawling metropolis of Washington, D.C. What he did miss was the Indian food.

“One of the things my wife and I both desperately missed that we had where we lived but don’t have here is an Indian restaurant,” Shields said.

Shields, who moved with his family to Salisbury about 15 years ago, said that while he was impressed with the number of restaurants and food offerings available in Salisbury, he was disappointed by the lack of Indian cuisine.

Shields wasn’t the only one.

“We have a lot of restaurants that attract a lot of people, but in effect people were complaining that there is no Indian food here,” said Gianni Moscardini, the owner of La Cava Italian restaurant and the president of Downtown Salisbury Inc.

Moscardini decided to fill that void, not with the restaurant he’s operated successfully out of an old church for 26 years, but with his food truck, Mise En Place.

Mise En Place is typically stationed outside of New Sarum brewery and has been offering a menu that has rotated every two months. Moscardini recently decided to change that by switching the menu daily, offering different themed options each day of the week minus Monday when the truck is closed. Tuesday became Taco Tuesday and Thursday is reserved for burgers and wings, but Wednesday is now when the scents of mango chutney and curry come wafting from the truck’s window.

“We started up with a few classic dishes like butter chicken and chicken tandoori,” Moscardini said. “We have a vegetarian option which is made with paneer, which is a cheese from southern India with cauliflower and peas. We serve everything with rice. It’s becoming very popular those Wednesday nights.”

To craft the menu, Moscardini relied on Alex Thayil, who serves as his sous chef at La Cava. Thayil, who is Indian, grew up eating dishes like butter chicken that he now serves on Wednesday nights from the food truck’s window.

“My mom and dad are always the inspiration for my cooking,” Thyal said. “I’ve been eating these dishes my whole life.”

The menu currently consists of butter chicken (a creamy blend of chicken drenched in tomatoes and spices), paneer (a vegetarian curry featuring Indian cheese cubes) and Tandoori chicken (slow cooked chicken thighs that have been marinated in yogurt and spices). Naan bread and papadum, which are crispy chips made of lentils, are also available. 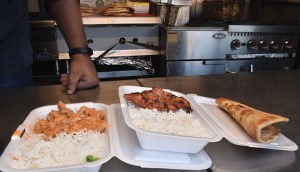 To source ingredients, Moscardini said that they’ve turned to familiar places, but have also had to find new suppliers. Moscardini or one of his staff members travels to Charlotte every Wednesday and Friday to buy food for the restaurant and food truck. Typically, that involves stopping at the same restaurant supplies and markets, but a few new stops have been added to those trips since Mise En Place started serving Indian fare.

“With Indian food, we didn’t have difficulty, but we did have to make a little search, but we were successful,” Moscardini said. “We have an Indian grocery in Charlotte and we have a beautiful one in Greensboro. We discover things. We are used to that.”

Moscardini’s decision to venture into Indian cuisine has paid off as Wednesday night’s have quickly become one of the food truck’s most popular evenings. So popular that Moscardini is considering serving the Indian food menu two days a week.

Kristen Plummer discovered her love for Indian fare when she visited a friend in London in college. She continued to love the spicy, rich cuisine, but hasn’t been able to find it anywhere in or around Salisbury until now. When Mise En Place began offering it on Wednesday nights, she was one of the first to visit. Already a fan of the food truck, Plummer was immediately impressed with the Indian food.

Shields, who was at one point within driving distance to the best Indian restaurants in Washington, D.C., seconded Plummer’s assessment of the food and said he would “highly recommend it.”

Moscardini said that he was expecting the Indian food to be well received, but that even he’s surprised by how well it’s done. Soon, it might be added to Mise En Place’s Saturday menu as well.