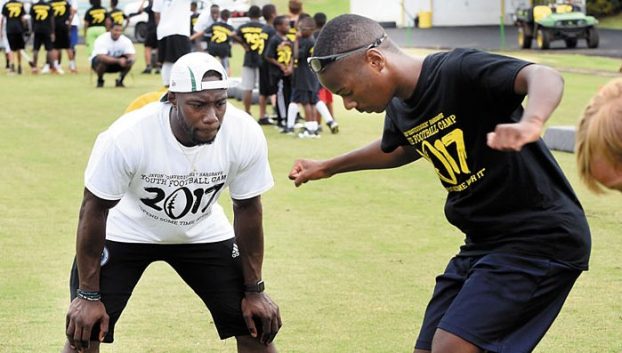 Romar Morris watches a player run a drill at football camp. (file photo by Wayne Hinshaw, for the Salisbury Post)

SAN ANTONIO — Touchdown and Tuesday don’t often appear in the same sentence, but nothing about 2020 has been ordinary.

Romar Morris, got the first touchdown of what he hopes will be a stirring comeback on Tuesday night in the Alamodome in the Spring League.

The 2011 Salisbury High graduate turned 28 last week.  He took five state sprint titles as a Hornet track and field star (four outdoor, one indoor). As a sophomore in 2009, he won the 100 and 200 meters and was MVP, leading Salisbury to a 2A team title. As a junior in 2010, same thing. A three-peat as a senior was derailed only because Morris suffered a hamstring injury.

Morris also played sneaker-to-sneaker defense in hoops and piled up rushing yards (1,780) and TDs (30) for Salisbury’s 2010 2AA football state champs. He was MVP of the state title game.

He was named NCHSAA Male Athlete of the Year for the 2010-11 school year.

At the University of North Carolina, Morris always had a stud ahead of him on the depth chart, but he had enough bursts of speed and spark that he managed career totals of 1,024 rushing yards, 499 receiving yards and 14 touchdowns. His usage was puzzling to many. He was more of a factor as a redshirt freshman than as a senior. That’s not how it normally works.

Morris blazed an eye-popping 4.3 40 on UNC’s Pro Day for NFL scouts in the spring of 2016. He wasn’t drafted, but at least he was back on the radar.

Those 4.3 wheels earned him a chance to show what he could do in the rookie camp of the New York Jets. He impressed people, signed a contract and survived some cuts. But a shoulder injury shoved him to Injured Reserve status for the entire 2016 season. Technically, he was a Jet for more than a year, but he was cut before the 2017 season started.

Morris landed on his feet in the Canadian Football League, first on the practice squad of the Toronto Argonauts.

In 2018, he made the practice squad of the Calgary Stampeders, the New England Patriots of the CFL. As the team’s third running back, he was activated after an injury. He proved to be a dynamic return man on punts and kickoffs and contributed 376 rushing yards and 167 receiving yards.  He was helping Calgary win and appeared on his way to becoming a fixture in the lineup after he romped for four touchdowns in a breakout game. But a ruptured Achilles tendon abruptly ended his season and prevented him from being part of a championship run through the playoffs.

Morris successfully rehabbed and returned, but he played just two games with the Stampeders in 2019 before he suffered a second Achilles injury.

When he’s healthy, there aren’t many swifter people on any football field than Morris, but health has been elusive. Now he’s back at it again. Back on the field for the first time since August 2019.

So what was Morris doing in the Alamodome on Tuesday?

The Alamodome in San Antonio is the “bubble” base for the Spring League.  It’s a short-season pro league — six teams playing four-game regular seasons — that’s more about opportunity than money. It’s a showcase for good players, most of whom have been released by an NFL team somewhere along their journey. It’s a league for guys who have been knocked down a few times, but haven’t given up, and that defines Morris. The league provides game tape for players. It also provides scouts with a chance to discover a diamond in the rough.

The Spring League has been around since 2017. Over 100 Spring League alums have gotten a shot with an NFL team. That list of 100 ranges from players who merely got a look in a camp to those who actually made practice squads or active rosters.

The Spring League is a big enough deal that it has a national TV contract with FOX .

He scored on Tuesday on a short pass and darted into the end zone standing up.

Then he bounced around a bit.

It had been a while since he’d scored a touchdown, and he really didn’t care what day of the week it was.

Now he’s ready for another run at the NFL.