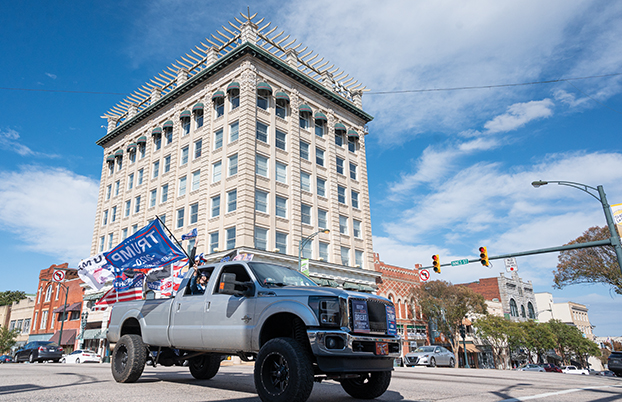 Josh Bergeron / Salisbury Post - A truck adorned in flags parades through the Square on Saturday afternoon. One of the riders in the car holds out a Trump flag.

SALISBURY — After growing up in a communist system in his native Romania, John Silver’s family emigrated to America in the late 1980s for a better life. He’s hopeful life will continue to get better if President Donald Trump is re-elected.

“I hope and pray that he does what he says. I do believe that America is trying,” Silver said following a Saturday Trump Train Parade through downtown Salisbury.

Dozens of vehicles circled throughout the downtown area for the event, which was organized by Deplorable Pride — an LGBT, conservative, Trump-supporting organization. Founder, Brian Talbert, told the Post the event was requested in Rowan County. Talbert said it was held for the sole purpose of showing people can be public with their support for Trump and proud to vote for him.

“We know what it’s like when a government doesn’t help cause when you’re in a communist, third-world country, they don’t help you,” Silver said. “My father risked his life to come to America in ’85, escaped communism, came to America. He got all the documents and paperwork for me and my seven brothers and sisters.”

Silver said sometimes Trump goes too far in his public statements, but the Romanian-American said he feels as though Trump gets a large amount of disrespect from people who don’t see his point of view and intent to make America great again.

Participants in the event did laps through the downtown area, circling back to the Square to sound their car horns, fly flags and shout out of car windows. Some of the trucks had passengers in the back. A thinned-down group then made its way to the early voting site at West End Plaza after regrouping at the parking lot on West Innes Street.

Once at the early voting site, the cars did laps in front of voters waiting in line to cast their ballot and put on a smaller rendition of the downtown event.

Well, the Trump parade has now made its way to Salisbury's early voting site and is doing this. pic.twitter.com/33xKBSeT7g

Elections Director Brenda McCubbins came out of the elections office to stop further parading in front of waiting voters. McCubbins said that the cars were parading in a no-campaigning area that immediately surrounds the polling location.

Event organizer Stephen Arthur said the event went to the Board of Elections office in case any one hadn’t voted yet. But cars arrived right as polls closed at 3 p.m. and it did not appear that any participants got in line. 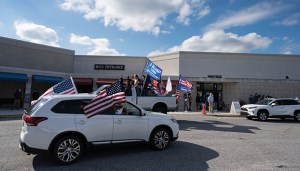 Josh Bergeron / Salisbury Post – Trump supporters parade in front of the polling location in Salisbury on Saturday afternoon. Participants in the parade honked their horns and did multiple laps in front of voters waiting to cast their ballot.

Skyler Edwards, 16, acknowledged that, although she cannot vote, she was participating in the event to support the president. She drove a truck covered with patriotic and Trump flags with a friend in the passenger seat.

“Just to show awareness and make our country feel better about itself,” she said about why she wanted to join.

Her boyfriend Aaden Stamper, 17, followed behind in another truck also covered with flags flowing from the back.

“Just to show my support for my president. I think he’s done a great job and I hope he gets elected again,” Stamper said.

Penny Burkhart traveled from Lexington to be part of the event.

“I love my president. He’s done a lot for this country in four years, and I honestly believe when Biden gets in our country’s gone, you’re gone, your family’s gone cause it’s going under,” Burkhart said.

Brianna Dean, 21, and her family joined in the event almost by accident. They heard about it and had planned to just watch, but once they began talking with Trump supporters at the rally point — a parking lot for Big Lots and Harbor Freight on East Innes Street — they decided to join.

Dean said they didn’t have a flag, but her parents decided to turn on their car’s lights and “honk our horn and let our voice be heard.”

Her mother, Mandy Dean, said they wanted to show their children by example of “standing up for what’s right.”

The six Dean children range in age from six to 21 years old. 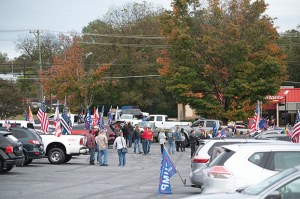 Josh Bergeron / Salisbury Post – Trump supporters gather in a parking lot off of Innes Street Saturday before a parade through downtown.

Nakiyah Davis and her sister Janiyah Davis were in their vehicle in the parking lot at Big Lots and wound up in a spirited discourse with former law enforcement officer John Hosinski. The sisters considered themselves counter-protesters but spent the majority of their time speaking with Hosinski.

The 20-somethings were yelled at by some other individuals participating in the Trump parade and Hosinski got out of his car. The three began to talk about race, President Trump, the Black Lives Matter movement and other societal issues.

“You have been better than anybody else who stopped here,” Janiyah said to Hosinski.

Nakiyah said she hoped that Hosinski can understand what it means as a Black person to live in constant fear of being pulled over by police.

Janiyah said she feels as though Trump gives people permission to feel hatred toward others.