Shoulder injury not expected to end season for McCaffrey 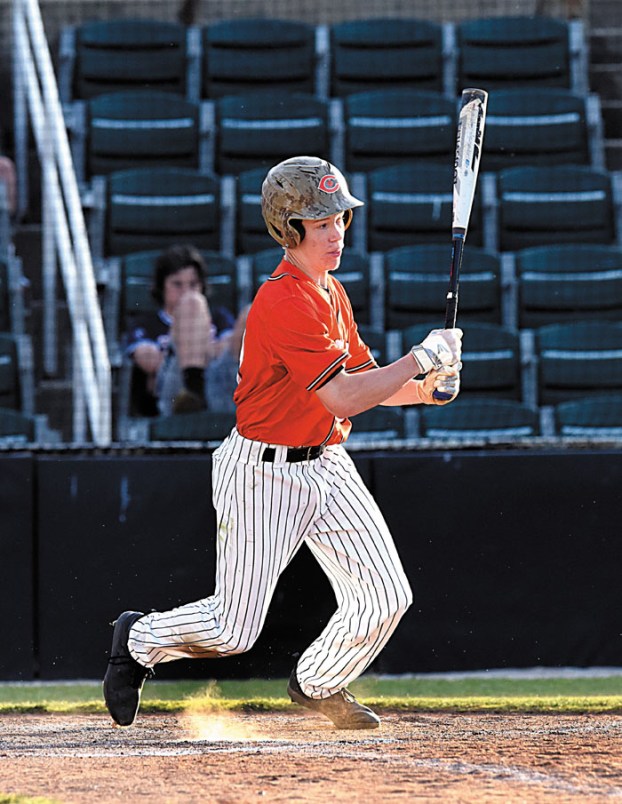 Carson's Dylan Driver smacks out a hit. file photo by Wayne Hinshaw, for the Salisbury Post

On Oct. 3, Driver was playing for the Showtime Blue Jays, a team of underdogs either headed to small schools or still searching for a scholarship offer.

But in the second inning, Driver singled hard up the middle.

“You can’t get in the box thinking, ‘Wow, that’s Gair, and I don’t have a chance to get a hit,'” Driver said. “You remind yourself that you’ve got fast hands, that if you keep your swing short, you can hit anyone.”

South Charlotte turned to the bullpen for the fifth inning, a youngster playing up on the 2021 team, but like all of the South Charlotte Panthers, highly regarded.

He was only throwing 80-something, so Driver greeted the fresh arm with a liner to center field for a double.

In his final at-bat of a seven-inning game that the Jays won 2-1 on a homer by West Rowan’s Steven Smith, Driver lashed a screamer straight toward left field. Vance Honeycutt, a Salisbury senior headed to UNC, snagged it. So Driver settled for 2-for-3.

“The out was definitely the hardest ball I hit,” Driver said. “I’ve kept hitting well — spring, summer and fall.”

No one except his family, his teammates and truly dedicated fans had heard of Driver before last March. But in his last four games of a COVID-wrecked 2020 season, he made headlines. He went 11-for-13 with 10 RBIs. His last 11 trips to the plate resulted in eight base hits and three walks, an on-base percentage of 1.000. He was batting .632 and was on national leaderboards when everything stopped. Driver’s last swing of an amazing semi-season resulted in a grand slam.

“Dylan always been pretty good, but he took a step last spring to being really good,” Carson head coach Chris Cauble said. “He has pop in his bat and he runs like a deer. On the mound, he’s learned to control his emotions and that has helped him become one of our best pitchers, as well. It’s nice to watch kids develop like that.”

After that hitting spree for the Cougars, Driver showed up at Newman Park ready for summer NC3 baseball, the alternative to American Legion ball offered by Rowan County coaches, including Jim Gantt, who doubles as Catawba’s head coach.

“The thing about NC3 ball was that we knew our season could end at any moment,” Driver said. “So I went into it with the idea of making the most of every single day. If a coach asked me to try something different, I tried it on my next pitch or my next at-bat. Coach Gantt was a hard coach, but he was hard on everybody. I learned a lot and enjoyed playing for him.”

Driver was nothing short of dazzling in NC3 ball, batting .439 with 15 RBIs in only 41 at-bats and demonstrating gap power and base-stealing wheels.  He also showed Gantt he could bring some heat with a lively, mid-80s right arm. Driver throws a two-seam fastball that moves and a four-seam fastball that jumps. He led Rowan’s pitching staff with a 5-1 record. He walked a few too many and his changeup and slider are still works in progress, but his 3.42 ERA was more than respectable.

“About three-fourths of the way through the NC3 season, Coach Gantt asked me if I might be interested in taking a look at the Catawba campus,” Driver said. “I told him I would definitely love to play for him at Catawba. I’m a homebody, for sure, so Catawba is a great fit for me. I’d been working for years with the goal of D-I, but it didn’t make any sense not to take an offer from Catawba when it was there. Now the goal is to get bigger and stronger and to keep improving.”

Part of a smooth transition to college will be Driver joining a host of Carson products — Luke Barringer, Deacon Wike, who is coming back from a 2020 injury, plus Zeb Burns and Ryan Street, who are NC3 teammates and Class of 2020 recruits.

Driver has a chance to be not just a contributing player for Catawba, but something special. It’s hard to say at this point whether his future is brighter as a pitcher or a hitter. Gantt’s policy is to give two-way players every chance to stay two-way players. Most prove to be better at one or the other, but there are exceptions, such as current two-way standout Hunter Shepherd.

“I love hitting just as much as I do pitching,” Driver said. “Getting an opportunity to do both is all I can ask for. We’ll see how it develops.”

Driver probably was considered more of a pitcher than hitter until his sudden explosion in the batter’s box last spring. Then he kept hitting line drives in the NC3 league and in showcase tournaments.

Driver said he’s “dead set” on signing with Catawba, although he hasn’t put pen to paper yet. Carson hopes to hold a traditional signing ceremony for all its baseball signees soon.

Driver predicts an excellent baseball season for the Cougars in 2021. They’ll have a very strong outfield, including Driver, CP Pyle and Caden Hudson, but a youthful infield.

As far as academics, Driver is a fine student, but he’s still formulating a college game plan.

“Maybe business, maybe sports marketing, but I also have an interest in science,” Driver said. “Maybe I’ll take a class and something will jump out at me and help me make that decision.”

Gantt can’t wait to coach him. Speed and arm strength are basically gifts. Driver has those two things going for him. The rest of it usually comes down to hard work, and while he’s become recognized as a potential standout, Driver still has the work ethic of an underdog trying to break into the lineup.

“Success was inevitable for Dylan because he’s one of our hardest workers and one of our most self-driven kids,” Cauble said. “Catawba is getting a good one.”