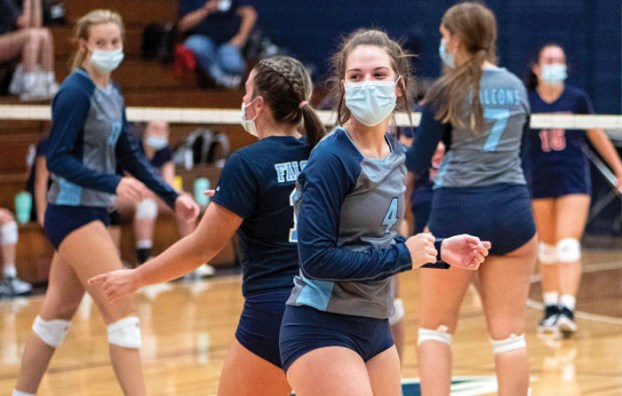 West's Allison Ennis (4) was part of the Falcons' victory Tuesday over the visiting East Rowan Mustangs in the first match of the season. Mt Ulla NC 11/17/20 JON C LAKEY/FOR THE SALISBURY POST.

MOUNT ULLA — One of the stars on the Rowan Little League softball team that won the 2015 World Series, Allison Ennis was regarded as a can’t-miss athlete.

As a West Rowan senior, the 5-foot-6 Ennis is still a can’t-miss person and a can’t-miss student, but after two devastating injuries, she’s accepted the reality that this school year will mark the end of her athletic journey.

“There have been some tough days when it’s been hard to see any light anywhere,” Ennis said.

Ennis still approaches every volleyball practice with a smile and she plans to make the most of every inning of a COVID-shortened softball season in March and April.

But she’s also smart enough to understand that with the rising virus numbers in the state, both of her senior seasons are in the day-to-day category.

West played a volleyball match on Tuesday, the first of the season for a team that was 28-1 a year ago. West swept North Piedmont Conference opponent East Rowan. Ennis did well, registering 13 assists with no ballhandling errors, plus eight digs and one ace. She split opportunities with another capable setter — junior Noe Gaeta.

“With everything that’s been going on, it was nice to actually have a game day,” Ennis said. “We’ve had scrimmages with no one in the gym, but at least on Tuesday we could have family around. We played well for a first match, played together. All I’m hoping for is to be able to finish the season.”

Playing with a mask on, which was the case on Tuesday, was a challenge.

“Setting is such as important position, with the whole game flowing through you,” Ennis said. “But with a mask on, you can’t talk to the hitters and you have to rely on hand gestures. That led to some miscommunications Tuesday night. You try not to think about the mask, you try to just go out there and play, but it’s harder to breathe. There were times I had to slow down and get some fresh air.”

Ennis has one family member around virtually all the time. Her younger sister, Ashlee, is a sophomore defensive specialist for the Falcons.

“Well, there have been a few practices where I wanted to kill her,” Ennis said with a laugh. “But I really enjoy playing with Ashlee and I do appreciate the chance to play with her. We’ve got chemistry together and when you live with one of your teammates, it means you have the chance to pick each other up if one of you is having a rough day.”

Ennis’ career stayed on course as a freshman. She played most of that volleyball season on the jayvees, but she also got some action with a 20-win varsity squad. She started for the softball team that tied for the NPC championship.

As a sophomore in the fall of 2018, Ennis was an All-Rowan County setter for West’s 19-5 volleyball team and was third on the team in digs.

But her sophomore softball season in the spring of 2019 brought a disaster. West played Carson on March 28.

Carson’s Liza Simmerson laid down a bunt toward third, and with the first baseman charging, Ennis, West’s second baseman, headed to cover first. The throw arrived in the base line simultaneously with Simmerson, who ran through Ennis’ arm.

“Liza is such a good friend of mine and she was just trying to get to first base,” Ennis said. “My wrist just snapped.”

The broken wrist was a season-ending injury that would linger for months.

“Lots of pain and discomfort,” Ennis said. “I did make it back at the end as a pinch-runner, but I missed so much. That was a very good team (22-4) that won championships — the NPC regular season, the NPC tournament, the Easter tournament. Your coaches and teammates keep telling you that you’re still part of it, but when you can’t do anything, it’s hard to feel like you’re part of it.”

Ennis worried that she wouldn’t be healed before her junior volleyball season, but she started to feel almost normal by August as the 2019 season began. She was off target on her sets for a while, but gradually she figured it out and rediscovered her touch.

West got on a roll, with Ennis doing a superb job of setting for powerful hitters such as Tori Hester and KK Dowling.

West was 17-0 when Ennis suffered her second injury.

“I took off running and my foot just fell apart,” Ennis said. “It came out of nowhere, and it turned out to be a lot more serious than the wrist injury.”

The optimistic first diagnosis was that she would miss three weeks. But then X-rays revealed that it was another season-ending injury.

Surgery was required. Ennis wouldn’t walk without the aid of crutches for two months.

She hobbled around and went to the games to support her sister and her teammates.

“I remember when we went to South Iredell’s gym, I went out there for the captain’s meeting and just broke down and started bawling,” Ennis said.

She would miss another season of championships. Gaeta came up from the jayvees and stepped in as the setter, and West kept winning — all the way to the regional final.

“I was so proud of Noe Gaeta and for all the girls for continuing on and winning so much, but I hated that I didn’t get to be on the court with my sister and experience all of it,” Ennis said. “Our gym was filled like I’ve never seen it before. It was surreal.”

She still made the all-county squad for her work in those first 17 games, but something close to depression crept in for Ennis after that.

There were days she didn’t want to get out of bed.

“I just wasn’t myself for a while,” Ennis said. “I’d started to realize that the foot injury was so significant that it was going to mean not playing volleyball in college, and I’d always thought of volleyball as my best sport.”

Eventually, she made a comeback. She was getting close to taking the field for her junior softball season in the spring of 2020. West had a chance for a huge year behind pitcher Whitley Arnott, but that season was halted by COVID-19 after the Falcons had played three games.

“I was close to playing and then the softball season shut down,” Ennis said. “So I thought that it would be a chance to really get back in the gym and get in great shape, but then the gyms shut down.”

That might have been a reasonable place to just call it a career, but Ennis has not.

“The kid is a fighter, an amazing athlete with the heart of a lion,” West head volleyball coach Jan Dowling said. “She never gives up. She’s a true comeback story, not once, but twice. Kids like her are why I’ve coached for 25 years.”

Ennis was still struggling some with the foot injury when West started workouts for the current volleyball season.

“Everyone was telling me not to be so hard on myself, but I knew I was off and I was a wreck,” Ennis said. “I’d feel fine on Monday, Tuesday and Wednesday, but then on Thursday and Friday my foot would start tightening up.”

Coach Dowling keeps a close eye on her.

“I know her foot still gives her problems, so I’m nervous about pushing her and hurting her,” Dowling said. “I know I have to try to protect her from herself because she has so much desire that she’s going to go after every single ball. She gets to some balls that most setters aren’t going to even try for.”

Ennis has been filling out college applications in recent months. It’s given her an opportunity to reflect on a time when she was 100 percent healthy, and the Rowan Little League girls were on top of the world.

“One of the things they ask on the applications is to tell them about a significant time in your life,” Ennis said. “For me, it always goes back to that summer when I was 12 years old. It didn’t hit me when I was 12, but now I realize how lucky we all were. At a young age, we learned to get along with people from all over the world. We learned sportsmanship. We learned the value of teamwork and of playing for each other.”

UNC is her dream college, but she has a number of alternative options such as Clemson, N.C. State, UNC Wilmington, Appalachian State and Coastal Carolina.

She expects to start hearing from schools in January.

Ennis felt no soreness in her foot during or after Tuesday’s match. She also woke up Wednesday morning pain-free. That surprised her a little bit.

There’s hope for a volleyball season and for a softball season without pain and with nothing but wonderful memories.

On Friday, she’ll be heading back to the South Iredell gym for a match that will tell the Falcons a lot about where they stand. This time she’ll be setting, not sobbing.

“A lot of coaches worry about what their records are, but I don’t know what mine is and I don’t care,” Dowling said. “When you finish coaching, you’re not going to remember what your record was, you’re going to remember the people like Allison Ennis. She’s one in a million.  I’m thankful for the opportunity to coach her.”