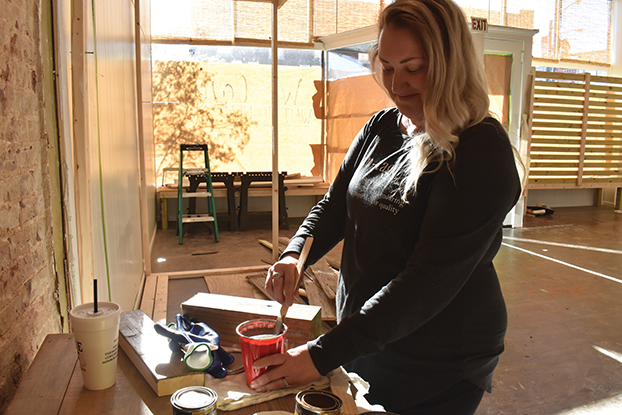 Sarah Mini has learned how to properly refurbish and repurpose vintage pieces of furniture by absorbing information from YouTube, Pinterest and other websites. Ben Stansell/Salisbury Post

SALISBURY — It was just a dusty bushel basket lid sitting among a slew of other vintage items in a now defunct antique store in China Grove. But when it caught Sarah Mini’s eye, she saw more.

That 100-year old lid, Sarah thought, would make for a great wreath. She purchased the lid and took it home, where she refurbished it, adorned it with flowers and added the script word “blessed” on the front.

“I love the idea of taking things that are thrown out because they’re old and giving them new life,” Mini said.

That first lid turned wreath spawned a line of salvaged door decorations and inspired Sarah to start Heart and Oak, a vintage decoration and refurbishment store. Whether it’s repainting an old dresser or repurposing an antique chair, Sarah specializes in taking old objects and reshaping them into something new.

The name Heart and Oak is a nod to the tree that Sarah spent her childhood afternoons playing under. The spirit of the businesses is tied back to her upbringing.

“I grew up in a 100-plus-year-old house around Burlington (North Carolina) so I’m used to that kind of stuff,” Sarah said. “It’s a part of me. When I see and save a vintage item it takes me back there. I had a good childhood.”

For three years, Heart and Oak has operated primarily online, but also out of various locations where similar vendors meet, including The Depot at Gibson Mill in Concord and the Chartreuse Barn in Thomasville. Soon, Heart and Oak will have its own, permanent home at 106 E. Innes St. in downtown Salisbury, the space formerly inhabited by Oxford + Lee, a clothing boutique.

Although Sarah said she’s always dreamed of having her own shop, it was her husband, Aaron, who took the tangible steps to make it happen. He didn’t even tell her that he was speaking to realtors or looking at real estate until it was almost time to sign on the dotted line with Lane Yates Realty for the spot downtown. 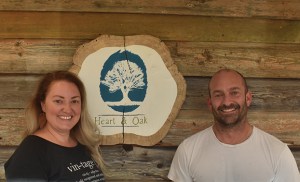 Although Sarah has dreamed of having her own Heart and Oak store, her vision was made a reality when her husband Aaron began to explore real estate opportunities in downtown Salisbury. Ben Stansell/Salisbury Post

“I wanted to be able to support her and I just came to her and said, ‘Hey honey, I think there’s an opportunity for us to open up a store. What do you think about it?’” said Aaron, who owns Salisbury Rug and Carpet Cleaning. “She was obviously shocked.”

Faced with an opportunity to make her dreams come true, Sarah said that she was stunned.

“I wanted to throw up,” Sarah said, laughing as she thought back at how nervous she was.

After pushing away those nerves, Sarah decided to go for it.

The couple began to renovate the space several weeks ago, and Sarah has already started to fill it with antiques and vintage furniture. A roughly 200-year-old chest has been installed as a checkout counter and Sarah has plans to turn three antique chairs into a vertical shirt rack, where she will display the “vintage” collection of shirts she also sells.

As they’ve begun to paint and polish the space, Sarah has started imagining what the shop will be.

Since Heart and Oak started three years ago, Sarah has already built a client base that extends across the country. As word has spread that Heart and Oak will have a full-time, physical location, buzz has started to build, Sarah said.

“I think that’s probably one of the biggest things I’ve been surprised by,” Sarah said. “Obviously people found out through social media and I have these connections with people across the country who already know me.”

Heart and Oak will open in downtown Salisbury on Nov. 29. More information on the company can be found at heartandoakhome.com. 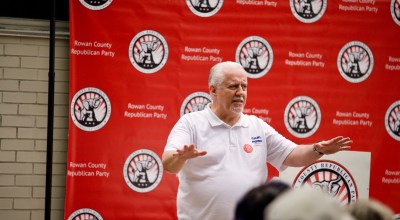