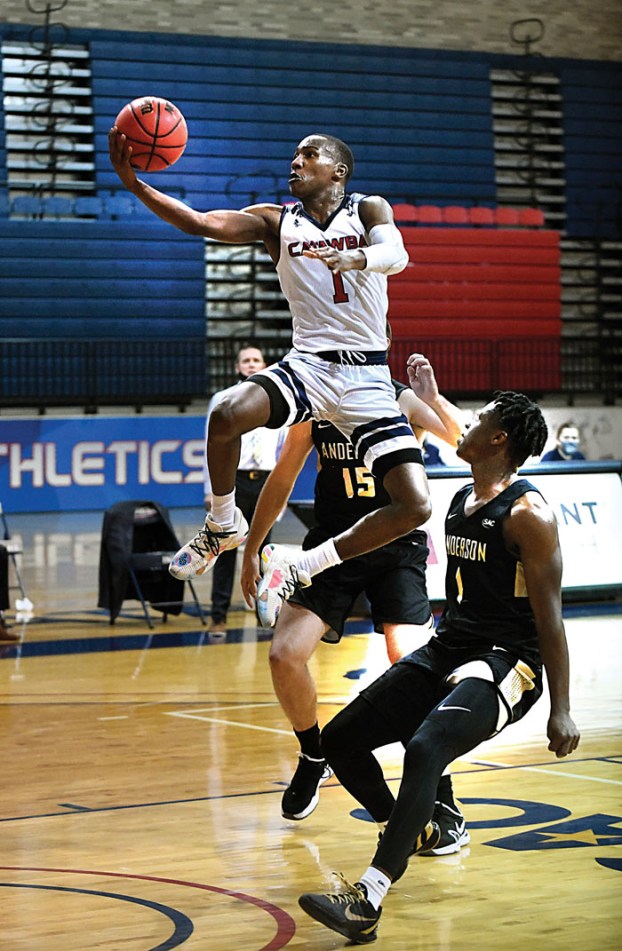 SALISBURY — Catawba’s men’s basketball team couldn’t separate from Anderson in the first half, but the Indians had an Ace in the hole.

Ace Carter drilled momentum-grabbing 3-pointers in the second half as the Indians pulled away from the Trojans for an emphatic 90-78 South Atlantic Conference victory in the season opener for both squads.

The Indians had to create their own energy in a virtually fan-less, COVID-emptied Goodman Gym, but they put together a solid second half and put six in double figures.

Carter finished with 19. Terrence Whitfield, who was on the questionable list all week with a turf toe injury, was able to play and play well. He scored 15.

Carter Phillips is something old as well as something new. Phillips played for the Indians two seasons ago, transferred to King, and is now back at Catawba. He scored 12.

Head coach Rob Perron vowed that 6-10 post man Ben Bowen, who has been waiting in the wings for quite a while, would be a factor this season, and the tall guy got off to a solid start with 11 points.

Marcus Burwell, who is expected to be Catawba’s leading scorer most nights, shot just 3-for-16 and was 0-for-8 on 3-pointers, but the 6-3 point guard, a Division I transfer, produced 11 assists and eight rebounds. He also had seven turnovers, so his debut was a wild ride.

Catawba took a 39-37 lead to the locker room at halftime. Whitfield had nine points at the break.

Catawba didn’t generate a massive run to start the second half, but Bowen did have a nice flurry of buckets and the Indians gradually started to ease away.

Carter’s 3-pointer on a fastbreak with 14:31 remaining gave the Indians a double-digit lead at 56-46. They never lost control after that.

Anderson did claw back to 67-63 with 8:30 remaining, but that’s when Robinson, whose main tool is sheer competitiveness, scored on second effort. He grabbed his own miss inside and stuck it back for the critical bucket that blunted the Trojans’ comeback hopes.

Carter’s 3-pointer with 3:59 left to play was one of those start-the-bus things. That shot gave Catawba a 16-point lead. The Indians cruised from there.

Catawba shot 48.6 percent for the game, while holding Anderson to 35.9-percent shooting.

Catawba outscored the Trojans 30-15 from the 3-point line and had a significant edge in second-chance points.

Anderson was able to stay as close as it did for as long as it did by going 27-for-34 from the foul line. Catawba was only 10-for-19 on free throws.

Quin Nottingham scored 22 for the visitors.

Catawba will play on the road on Tuesday at Mars Hill.