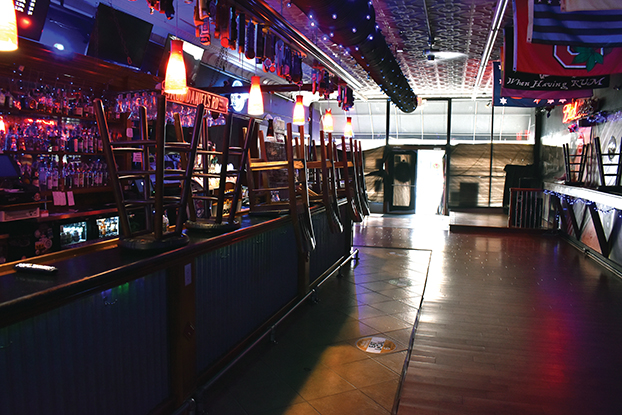 The Fish Bowl's barstools have spent nearly as much time on the counter as they have on the floor this year. Ben Stansell/Salisbury Post

SALISBURY — Last year, Chris Ostle felt like he was on top of the world.

The Fish Bowl, the downtown bar he co-owns with Branson Hurst, was in the midst of a successful year and was, as he describes it, “the biggest, baddest thing in town.”

When Gov. Roy Cooper announced in March that bars were among the businesses that had to close, Ostle viewed the temporary shutdown as a much-desired vacation.

That optimism soon faded when the realization set in that coronavirus, and the regulations it brought with it wasn’t going to be temporary. Over the past several months, Ostle and Hurst have dealt with COVID-19 restrictions that have forced them to bend their business practices, invest money in new equipment and reduce their staff.

Now, they say their business is at a breaking point.

“I can’t tell you what’s going to happen tomorrow, much less a month from now,” Ostle said. “2021 is a giant question mark. I have no idea if we’ll be able to survive. We went from making a million in sales last year to maybe making $100,000 this year and barely being able to keep the lights on and trying to figure out which bill is going to put us out of business.”

When Ostle and Hurst realized that COVID-19 wasn’t going anywhere, they surveyed their options. After speaking with a local Alcohol Law Enforcement agent, they determined that their best route to reopening was to attempt to be included in the definition of a restaurant.

When Cooper moved North Carolina into phase two of his reopening plan in mid-May, it allowed restaurants to reopen at half capacity. Places the Fish Bowl see as its competitors such as DJ’s, a restaurant that also serves alcohol, welcomed customers back. Meanwhile, the Fish Bowl’s doors remained locked.

“It says very clearly that certain private clubs and members-only clubs may be included in the definition of a restaurant, if they fall under these two guidelines: that their pre-emergency declaration normal operations included food service and they’re able to live up to all COVID restrictions in their restaurant,” Ostel said.

Ostle said that food was already a part of the bar’s business plan prior to the pandemic. The Fish Bowl opened The Hot Box food truck in the summer of 2019. Stationed on the bar’s back patio, the food truck served burgers, hot dogs and other bar fare to its patrons late into the night.

Despite having the food truck, Ostle and Hurst said they were told it didn’t qualify them to be included under the definition of a restaurant.

“We saw some neighboring bars and stuff opening up and after speaking with ALE, they were like ‘Oh, it’s because they serve food,'” Hurst said. “We had a food truck outside and during this entire pandemic, everybody said outside is better, but that didn’t meet their qualifications and they wanted the exact same equipment to be inside.” 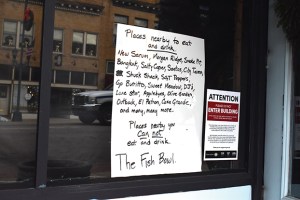 Frustrated by COVID-19 restrictions, the owners of The Fish Bowl have placed this sign in the bar’s window. Ben Stansell/Salisbury Post

Asked about the Fish Bowl’s fight to stay open, a spokesperson for ALE said, “ALE focuses on a permittee’s business model and daily operation to determine if they are operating more as a restaurant or as a private bar. Special agents maintain an open dialogue with the ABC (Alcoholic Beverage Control) Commission regarding private bars as each business is unique. Throughout the governor’s phases ALE has strived to provide guidance and education to businesses which are private bars, and to obtain voluntary compliance from them.”

The general statutes enforced were in place before Cooper’s executive orders, the spokesperson said.

In their attempt to fit within the rules, Hurst said the business spent “thousands of dollars” renovating a storage closet and bathroom inside the bar to transform it into a kitchen. With a working kitchen under its roof, The Fish Bowl opened again on July 21.

Adding food to the menu was a strategy used by bars across the state this summer, many of which were frustrated that they weren’t included in phase two of Cooper’s reopening plan.

During the time that the restaurant was closed, Ostle said that they tried to keep most of their staff members on payroll. Receiving funds from the Paycheck Protection Program helped them do that, Ostle said. That money eventually ran out, but business slowly began to pick up in the months following the Fish Bowl’s reopening. Guests once again sat on barstools, nursing beers, cocktails or munching on food from the bar’s limited menu.

That was the case until this month, when Ostle said the Fish Bowl was told it had to close its indoor operation once again.

“The reasoning for it says that because we are a private club, we are no longer falling under the umbrella even though nothing has changed,” Ostle said.

The Fish Bowl can no longer serve its customers inside, but the bar is allowed to operate outdoors at 30% of its outdoor capacity under Cooper’s phase three guidelines. That means that 19 patrons can hang out on its back patio at one time. In under a year, Ostle said, the bar has gone from being able to have 375 guests indoors to having less than 20 outside.

On Wednesday, the Fish Bowl reopened for outside service only. Ostle and Hurst had two, event-style tents installed on the patio to provide customers with a bit of protection from the elements. With temperatures cooling down as fall turns to winter, Ostle said he doesn’t see outdoor seating as a viable long-term solution.

“It’s getting to be like 37 degrees at night so I would never really ask anyone to support me by standing outside when they could walk any direction to a bar with heat,” Ostle said.

Along with having its capacity reduced to a fraction of what it once was, Hurst said that the bar has also lost some of its employees. An 18-person staff of bartenders and security guards has been diminished to a four-person crew.

“This current year has been a complete nightmare of thinking it was going to be a 30-day shutdown, then 45, then 60, and I think altogether we were closed for 150 days,” Hurst said. “We were open for two months and now we’re back down to outside only and it’s going to get down to 37 degrees tonight.” 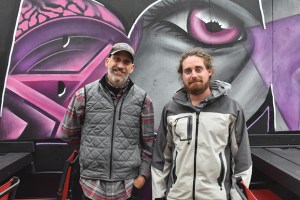 Chris Ostle and Branson Hurst stand on The Fish Bowl’s patio, the only place the bar is currently allowed to serve patrons. Ben Stansell/Salisbury Post

Ostle said that he feels like the restrictions are unfair and that the Fish Bowl’s reputation has actually hurt it.

“It seems like we’ve never gotten equal treatment. We’ve always had the big flashing lights and bullseye on our back,” Ostle said. “It was a badge of honor before, but now it’s working against us.”

Both Ostle and Hurst said that they aren’t optimistic about the future of the Fish Bowl. The owners did recently apply for Rowan County’s small business grant program, which could net them several thousands dollars in relief.