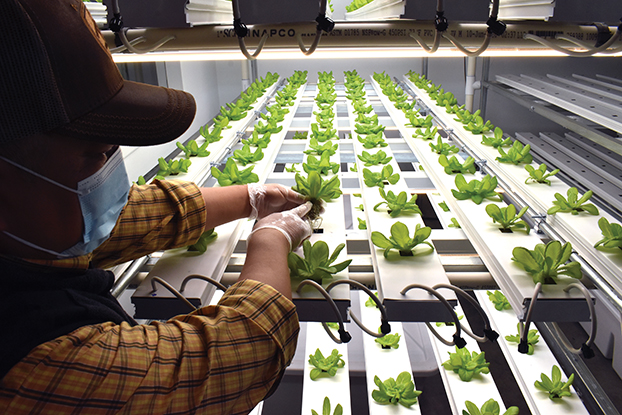 Federico Hernandez, who is quickly becoming an expert on hydroponic gardening, explains how the lettuce receives nutrients while planted in the grow tables. Ben Stansell/Salisbury Post

CHINA GROVE — Around 9 p.m. any night of the week, Federico Hernandez can be found in the Main Street Marketplace warehouse, preparing the plants in the hydroponic garden for the the night ahead.

Along with checking the nutrient levels of the water being pumped to the roots of the bright green butter lettuce, Hernandez turns on the LED bulbs hanging above the plants to ensure they have the light they need for the next 12 hours. By then, he’ll be back to look after the plants once more.

“Caring for plants is my passion,” Hernandez said. “It’s my priority.”

“We’re trying to use it to create systematic change in the community,” said Oliphant, Main Street Marketplace’s executive director.

The greens, which are grown using a nutrient-rich water solution on rows and rows of stacked grow trays, will eventually be sold in the room next door — a marketplace where people of low-income status have access to fresh produce and other locally-made products.

“It’ll fuel our market so we can sell fresh foods at an affordable price and then eventually, if we grow enough, we can sell locally to help us become self-sustaining as an organization,” Oliphant said. “… We want people’s food stamps to go further here so that they can not just buy processed foods, but healthy, fresh foods.” 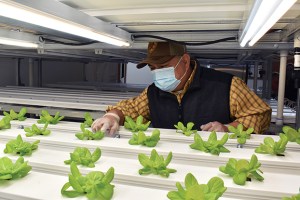 Federico Hernandez is the guardian of the hydroponic garden. He comes in at least twice per day to check on the nutrient levels of the water and the ensure the plants are receiving enough light. Ben Stansell/Salisbury Post

The market, which debuted Thursday, will eventually be open to everyone and will offer a membership program that allows customers to shop its selection of produce and products. People who are in Main Street’s Getting Ahead Program will receive a free membership.

Both the new market and hydroponic garden are housed in a building that was a laundromat before Main Street bought it and renovated it several years ago, long before Oliphant even really understood what a hydroponic system was.

The idea for the hydroponic system came from one of Main Street’s board members, Oliphant said, but was made possible through a $150,000 grant from the Rowan County United Way.

“We went and visited a place in Burlington called Your Local Greens and we decided that we wanted to do it,” Oliphant said. “We applied for the grant and we got it, which was huge.”

Using the grant, Oliphant outfitted the room in the warehouse with several rows of grow trays, a germination chamber, an ebb and flow machine and other equipment needed to run a hydroponic system. The system and all of its components was originally intended to be installed in the spring, but wasn’t implemented until the fall due to COVID-19.

Oliphant then hired Hernandez, who studied horticulture in Mexico, to serve as the caretaker of the hydroponic garden. It’s a role he takes seriously. He spends several hours per day among the plants and is there seven days a week. Hernandez is assisted by Caroline Brandt, who runs the greenhouses at L.L. Goodnight and Sons and has a degree in horticulture.

Hernandez and Brandt planted the first butter lettuce seeds in early November. After germinating in a climate-controlled container that Hernandez said is usually hovering around 80 degrees for three to four days, the seedlings were placed in an ebb and flow machine and were watered for several hours. From there, they were put into the grow trays where they have remained since. Brandt said that they aim to harvest their first batch of lush butter lettuce by Dec. 14.

In total, Oliphant said, the growing cycle takes just about 42 days. A quick grow time isn’t the only advantage of the hydroponic system. The lettuce produced in the small room should have a longer shelf life (4-5 weeks) than the average head of the stuff found in a grocery store and can be grown year round, Oliphant said. 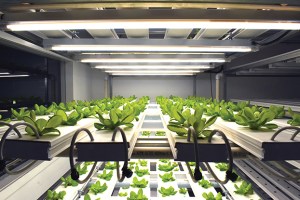 It only takes a little over 40 days for the seeds in the hydroponic system to grow into full size heads of lettuce and without having to deal with changes in weather, lettuce can be grown year-round. Ben Stansell/Salisbury Post

Only a small portion of the garden’s  grow tables are currently in use. The program is on a three-month pilot run, but if it proves to be successful, the plan is to plant more greens. In addition to butter lettuce, Brandt said they will grow Swiss Chard, kale, arugula and other leafy greens. In the warm germination chamber, they’ve already grown microgreens and plan on growing herbs.

At full capacity, the indoor garden will house more than 2,000 sprouting plants.