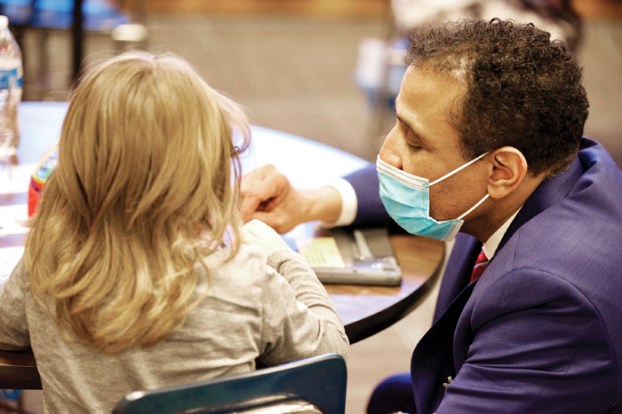 Carl Blankenship/Salisbury Post - RSS Superintendent Tony Watlington interacting with a Hanford Dole student. Watlington stopped bt several classrooms during his tour at the school, stopping to speak to students and joining in on a small exercise session in one.

SALISBURY — Rowan-Salisbury Schools Superintendent Tony Watlington on Tuesday began his plan to visit every school and facility in the district.

He started at the district’s transportation department before going to the Carter Building, which houses technology and other departments. The first school Watlington visited was Salisbury High School. He then went on to North Rowan High, North Rowan Middle and North Rowan Elementary schools as well as Hanford-Dole Elementary School.

Watlington spoke to principals and passersby in the hallways while visiting classrooms across grade levels. He stopped in and interacted with students as he went. He even stopped to join in on a warm up exercise in one elementary class.

Among the people Watlington spoke with was Hanford-Dole Principal Jessica Rivas, who was hired by the Board of Education this school year. She told him the school has a great staff and the teachers want to be there. Watlington asked principals how he can be supportive and said he plans to frequent the schools.

Watlington said his main takeaways from the day was that the district has many strong staff and good students. 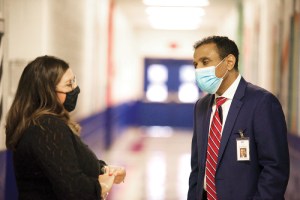 “It’s an indicator of the level of poverty in the district,” Watlington said. “I believe that we have to be really intentional about how we provide extraordinary education so those young folks, those kids have some opportunities for advancement.

Watlington said he feels passionate about all the schools and students, but he recognizes the 66% of kids with free or reduced lunch may need something different.

“Really getting to know the lay of the land helps me think through what that is,” Watlington said. “That’s the difference between equity versus equality.

Watlington said he asked elementary students if they wanted to be in school. While one kid said no, most told him they do want to be there. Watlington said he also received the impression that teachers want kids in school because they feel they can serve them better in person.

Watlington said he believes there is a hunger in schools for COVID-19 vaccination so the schools can get closer to normal.

RSS has been an oddity in a state where many districts either did not begin classes in person or have not been able to remain open for the entire year. Cabarrus County Schools opened remote and was not able to remain in plan B and Kannapolis City Schools was in plan B for most students until January. The KCS board opted to follow district administration’s recommendation to begin the second semester remotely amid concerns of rising cases of COVID-19

RSS, under retired superintendent Lynn Moody’s leadership, opted to wait until January and survey staff to see if it would be able to remain open. Watlington noted Guilford County Schools, where he just came from, has not brought students into classrooms all year either. He said it is noteworthy the district has managed to remain open with no COVID-19 clusters.

“I think that school is such a part of our kids’ lives, it’s a social center for them, it’s the norm for them, and being out of school just throws everything out of wack,” Watlington said, adding for many of the districts poor students, school is where their meals come from.”