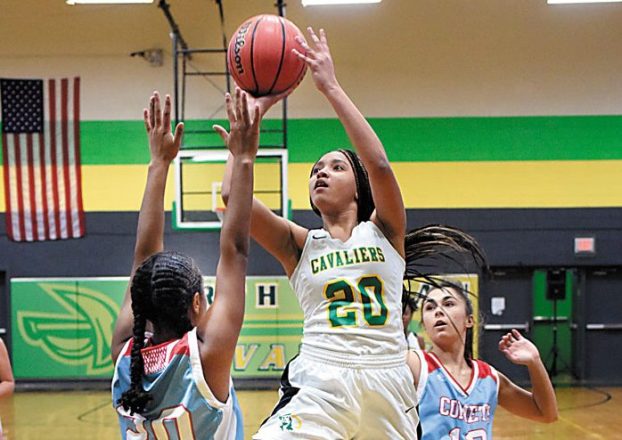 Ninth in a series of previews on local basketball teams.

Playoffs: Lost second round to Community School of Davidson

North shook off a 44-point loss to Carson to win two Christmas tournament consolation games. The Cavaliers put together a five-game winning streak in the Yadkin Valley Conference late in the season, reached the conference tournament final and even won a playoff game for the first time since 2015-16. There were a lot of positives.

North finished 2019-20 with a top-20 ranking in 1A, and even though they still are going to be undersized, the Cavaliers might be even better this season.

Lamar Wilkerson, who orchestrated North’s turnaround, has moved into administration as an assistant principal, so the Cavaliers are being guided this season by Anthia Smith, who was one of Wilkerson’s assistants.

Smith is a native of New York, who traveled to North Carolina for a friend’s wedding and fell in love with the area. Connections she made at that wedding led to her applying and being hired at North Rowan.

Smith has a strong playing background. She was an All-American in junior college at Alfred State in New York and moved on from there to play at Long Island University Post.

Her bachelor’s degree is in psychology. That’s always helpful in the world of girls basketball where mindset is at least half of the battle.

The Cavaliers subtracted two veterans  who transferred to Salisbury (Natavia Taborn and Kimya Lynch). They were good players. Taborn accounted for more than 800 points in her three seasons wearing the green and gold.
But their departures open a window for more playing time for young talent that has everyone buzzing.
“We’ve got some freshmen who are helping us in every facet of basketball,” Smith said. “We’ve got girls who can become stars.”
North won’t have to rely exclusively on its exciting freshmen class.
There’s a core of seasoned players back, led by senior Makiya McDaniel, junior Hannah Wilkerson and sophomore Kamora Cannie.
Wilkerson and McDaniel are the captains. Wilkerson was first team all-county last season. Cannie was second team. McDaniel was on the Honorable Mention list.
Wilkerson is a prolific scorer and put up 914 points in her first two varsity seasons. She’s the leading returning scorer in Rowan County at 15.8 points per game and ended last season with a heroic 34-point effort in the Cavaliers’ playoff loss. She’s not that big at 5-foot-8, but she can score as a shooter, driver, transition finisher or offensive rebounder. That ability to score from just about anywhere makes her tough to contain.
“She’s really worked on her game and has gotten quicker,” Smith said. “She can play inside or out for us.”
Cannie transferred to North from 4A South Mecklenburg where she had made the varsity team as a freshman. She was a tremendous addition to North’s program.  She averaged 12.2 points and scored 20-plus five times as a freshman. She’s extra quick defensively and provides ball-handling, passing and shooting skills on offense.
“She’s getting better at attacking and finishing,” Smith said. “She’s really good at setting up her teammates.”
The 5-foot-8 McDaniel was North’s best post player. She averaged 7.6 points in 2019-20 and worked for some double-doubles.
“We’re counting on her for a lot of senior leadership and she’s a good option, a nice inside presence,” Smith said.
Sophomore Chloee Stoner played quite a bit off the bench last season and will help the Cavaliers with her shooting.
Sophomore guard Kathrine Ellis is a newcomer on the roster.
The other new faces are the four freshmen — twins Bailee and Bloom Goodlett, Brittany Ellis and Kadence Vuyou.
Bailee Goodlett will join with Cannie to give North two ball-handling, ball-hawking guards. They should be able to discombobulate a lot of the offenses in the YVC and force turnovers, and North loves to score off its defense.
Bloom Goodlett will play where the Cavaliers need her most — in the post. She can help them hold their own on the boards against bigger teams.
Vuyou also will provide some post help.
Ellis is a good outside shooter and also is a versatile defender. Smith said she’ll be able to guard just about anyone except a big center.
With the freshmen, North appears to have more size, skill and 3-point shooting than last season, so this definitely is a team to keep an eye on, especially in the 1A ranks.
“We can play inside-out or we can play outside-in,” Smith said. “Things have turned for the good at North, and we want to keep it going.”
North opened the season with a 60-16 romp at Lexington. Wilkerson had 17 points and 10 rebounds. Bailee Goodlett (15) and McDaniel (13) also scored in double figures. Ellis debuted with nine points and five rebounds.