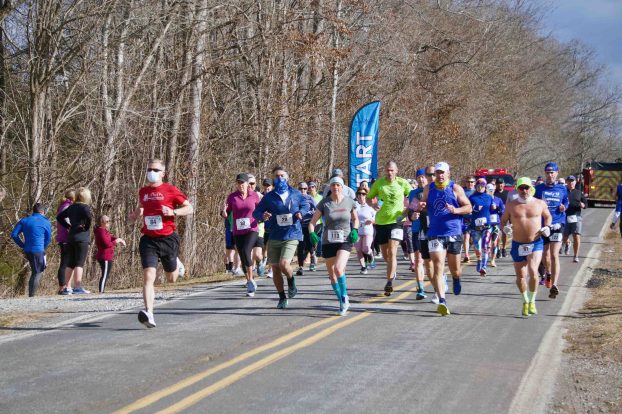 Carl Blankenship/Salisbury Post - A wave of runners taking off. Waves of runners were limited to 50 people.

MT. ULLA — Salisbury-Rowan Runners on Sunday migrated its 38-year-old Winter Flight Run out of its historic course in Salisbury and to the countryside.

The New Sarum Brewing-sponsored 5k/8k and fun run is a long tradition and one of the club’s first races of the year. Club President David Freeze said Catawba supports the race, too, but the club could not get clearance this year from the city for the race, so it moved to the roads around the Millbridge Ruritan Club Building and Sloan Park.

Ruritans already host races with the Salisbury-Rowan Runners, and Freeze approached the club about hosting Sunday’s event as well. Ruritan Paul Rogers said the club voted on hosting this race and agreed.

The year 2020 was slow year for the Salisbury-Rowan Runners because of the COVID-19 pandemic. A schedule of more than 30 races shrunk to only six. Attendance for Sunday’s race was down as well. The race had about 400 runners last year and declined to 300 this year.

Freeze said participation in most of the races has been down, and fundraising for this race also shrunk a bit. The race normally raises about $13,000. It took in about $10,000 this year.

“We’ve got people from all over and a lot of them are saying ‘gosh, great, you’re having a race,'” Freeze said, adding most runners are still putting down miles and there have been limited chances to come together in races.

The races held by the Salisbury-Rowan Runners fundraise for a number of local nonprofits, and Freeze said charities have been hurting because of losing funding from races.

The proceeds from Sunday’s event helped Rowan Helping Ministries, which provides services for people experiencing homelessness, in need of clothes, a meal, emergency assistance and other services.

The race placed runners in starting groups of no more than 50 people, encouraged social distancing and mask wearing in front of the club. The finish process was no-touch.

Runners could enter whichever variation of the race they liked, and Ainsley’s Angels returned this year to partner with the race. The national organization makes endurance sports like running accessible to people with special needs and runners volunteer to run as partners with someone benefiting from the organization.

The 8K overall winner was Matthew Martin with a time of 24:55. He was followed five seconds later by his twin brother Jonathan. The China Grove brothers began running at the end of high school, wanting to lose weight, and it became a passion for them. They even walked onto the team at the University of North Carolina at Pembroke and run races together all the time.

“I can’t remember the last time we ran a race not together,” Matthew said.

They both agree, the fulfillment of finishing a race is an important part of the enjoyment. And they love to see improvements.

The pair are preparing for their first marathon in Myrtle Beach in March. Matthew said they are putting in enough weekly mileage to be where they need to be endurance-wise.

Molly Nunn finished the 8K as the first female runner and sixth place overall with a time of 30:18. She got into running after her soccer career ended with a torn knee. She walked on for track at Wake Forest University and started distance running after she graduated.

Nunn said it has been difficult to find races to attend in the past year. She runs with groups to simulate races or virtual races as well. She attended some races in other states that required masks while running.

“Wearing a mask is horrible when you’re running,” Nunn said.

“I love running, I’m obsessed,” Delay said, adding it has been a good stress reliever during the pandemic.