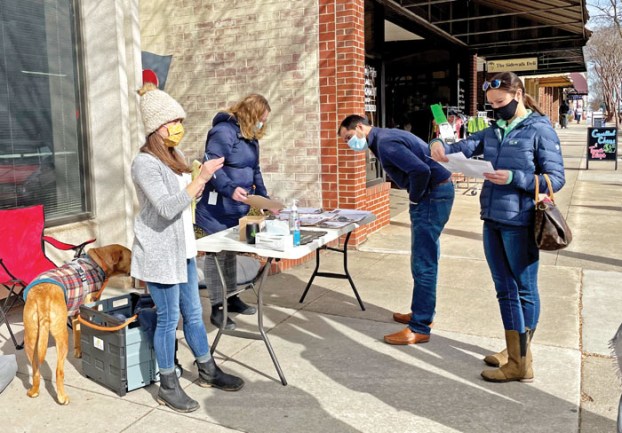 City staff members continue to gather public input on a multi-phased streetscape plan proposed for 10 blocks along Salisbury’s Main Street. The first part of the plan, which is set to take place sometime before the end of this year, involves re-striping. The second phase includes a long-term vision for sidewalks and parking improvements to beautify the downtown area and make it more appealing for pedestrians.

Wendy Brindle, the city’s engineering director, told the Post a definitive date for the North Carolina Department of Transportation’s repaving the streets has not been established, but it’s expected between March 17 and Nov. 15. She added that some locals have suggested pushing the repaving to the fall, but that could be a challenge, too, because the Cheerwine Festival currently scheduled for September.

Brindle said it’s not yet known how long the repaving will take, but NCDOT’s contract has restricted its construction to take place during nighttime hours. Additionally, she doesn’t anticipate any full lane closures, but some side streets may be closed temporarily.

While NCDOT will largely cover the costs for the repaving phase, the second phase will be funded from grants. It’s still too early to know when the second phase will begin and how long that project will last. However, making sidewalk changes and implementing bump-outs requires upgrading the underground infrastructure, which is likely to extend the process.

Alyssa Nelson, the city’s urban design planner, told the Post on Friday that, once staff feel they have received sufficient feedback, they will either make revisions with their consulting firm, McAdams, or make changes “in-house” and bring the plan before city council members. Though she continues to reach out to local businesses to schedule one-on-one visits with them, Nelson estimates staff has spoken with about 100 downtown stakeholders to date. And her meeting notes from locals currently spans 10 pages.

“We don’t want to rush (the process) if we’re not ready,” she said. 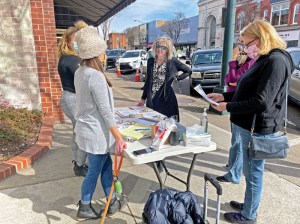 Artist Taylor Ellerbee and husband, Dylan, are fans of the proposed plan. And though the plan may require a few tweaks, Dylan said, it’s still “100% of an improvement” that “brings the city into the 21st century.”

Taylor said when looking at other cities people enjoy visiting — like Savannah, Georgia, or Greenville, South Carolina — one is able to see why there’s a movement to bring more green space downtown.

“I think this is part of the recipe for a successful, loved downtown,” Taylor said.

Cam Hall, of Piedmont Players Theatre, said she’s concerned about the construction that will take place. She worries about parking availability, particularly on Friday nights when people visit the theater.

Some suggestions among locals include a parking deck. Nelson explained on Friday that if one were privately funded and built, the problem with parking decks is the hesitance for people to pay to use it, especially when free parking is available.

Pam Coffield, owner of the Stitchin’ Post Gifts, said shifting to a three-lane model for Main Street is still a concern for her. At a previous meeting, she expressed concern for the number of available parking spots. However, while the proposed plan shifts the number of spaces among various blocks, only one parking spot is lost in total.

Brindle told the Post each block currently includes handicap-accessible parking on the corners, with extra spots near the Rowan County Courthouse. And while the goal is to retain at least the same number of handicap parking spots currently available, potential modifications to the plan could allow staff to shift those spots closer to the middle of the block.

Some locals, however, are entirely against the project, including Koco Java owner Arturo Therecka. While the project will beautify the downtown, he calls the three-lane model a disaster for his coffee shop because the resulting slowed-down traffic will harm his business. He estimates 80% of his business is conducted via drive-thru.

The three-lane model, he said, presents a challenge for vehicles to get back onto Main Street from his coffee shop. Additionally, traffic is slowed down even more when vehicles have to stop traffic to turn.

“The smaller the flow, the slower the business,” he said. “What we have right now (downtown) is a gift for the businesses. Don’t kill the Main Street.”

Josh Barnhardt, owner of Barnhardt Jewelers, said he understands parking is always a concern and that business owners worry for their livelihood. But the proposed plan, he said, is a step forward in improving downtown, and it will attract more people if the area becomes more walkable.

He said the plan helps bring visibility to Salisbury, which drives growth and investments in the downtown area. He’s also a fan of the three-lane model and implementing mid-block crossings.

“A more inviting streetscape is going to attract people,” Barnhardt said. “Change is hard, but I think change is good in this standpoint.”

Nelson encourages locals to reach out with their thoughts on the plan. She can be reached at anels@salisburync.gov.